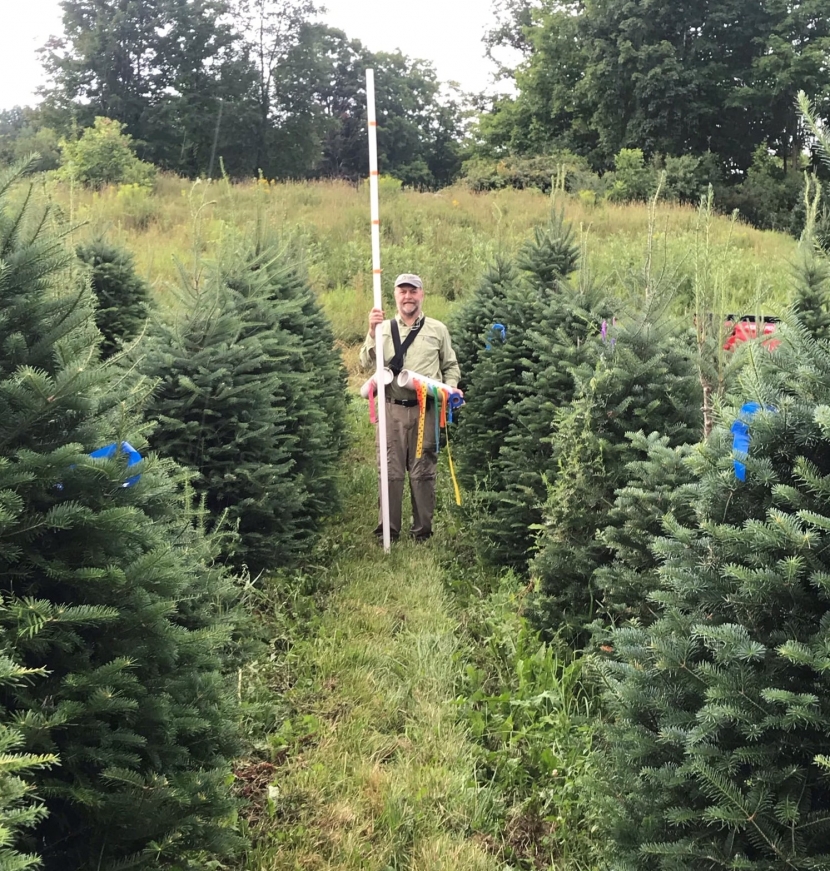 Nigel Manley is pictured during the busy summer season at The Rocks, when the farm's Christmas trees are hand-sheared.

For more than three decades, Nigel Manley, general manager of The Rocks Estate in Bethlehem, has led and expanded the Christmas tree operation for the Society of the Protection of New Hampshire Forests. After arranging his life around the agricultural rhythms of growing and selling Christmas trees at The Rocks, Manley will be stepping down as Christmas tree farmer, but will still remain with the Forest Society, now in more of a community outreach capacity, Jack Savage, president of the nonprofit SPNHF, said Tuesday.

“He came to me six or eight weeks ago and expressed his interest in changing things up a little bit,” said Savage. “I think he’s ready to not be a full-time Christmas tree farmer for the Forest Society, which is a challenging job. He is interested in continuing to work with us, so we’ve crafted a parttime position with some things he’s interested in continuing to do. He’ll still be involved with some of the programs.”

They include the maple program in the spring and the bus tours during foliage season. “Nigel has been such a fixture out there,” said Savage. “He’s been so instrumental in our success up there. He was involved from the start in planting those Christmas trees and growing that business and developing a lot of our retail customers and repeat customers, people who come back, whether local or from away, year after year after year. He built the relationships with the inns in the area that draw people to stay for a weekend and get a tree and a wreathe and make it a whole destination, a mini-vacation.

Ever since Manley joined SPNHF 36 years ago, in November 1986, just eight years after the Glessner family donated The Rocks Estate to the Forest Society, he became the force behind the Christmas tree farm and is the one who built all of it up, said Savage. After making his start by managing the original planting of the Christmas tree farm, Savage said Manley, ever since, has been the face of The Rocks and the force behind the Forest Society’s activities on the 1,400-acre estate.

Through the decades, Manley established a thriving operation with some 32,000 Christmas trees in the fields, has greeted thousands of families making the annual tradition to The Rocks to cut their own trees, and has developed a robust set of education programs, he said.

“These days, we sell a over couple thousand trees retail, plus thousands more wholesale, and all the wreaths,” said Savage. “He’s built that volunteer network that we rely on, plus seasonal workers, whether cutting wreathes or working outside. And then the maple museum.” Following the February 2019 fire of The Rocks’ operation center in the Tool Barn, SPNHF is about to break ground for renovations of the estate’s 1884 Carriage Barn to make it into the Forest Society’s northern headquarters and education and program center, to be called Forest Society North.

“What Nigel deserves is a tremendous amount of credit, too, for being so resilient,” said Savage. “After the fire, he helped us to keep moving forward, to keep up Christmas tree sales and all the other programming. Then, a year after the fire, was the pandemic. For two years, he’s been operating under pandemic constraints.” In early February, it was still undetermined if the maple programs of March and early this month could be done in person, but after studying COVID trends and determining it was reasonable, Manley and crew put the elements in place for a successful season, said Savage.

“No matter what the world threw at us, he kept us going and deserves a lot of credit for that,” said Savage. “Now, he wants a little more time to himself and we’re happy to grant it to him.”

Manley said, “It’s been many years and I’ve enjoyed growing not just the trees but the businesses associated with The Rocks. As anyone who is a farmer knows, it is all-consuming. I’m looking forward to continuing to work with volunteers and visitors – and having a bit more time for my own pursuits.”

Manley’s final title of his new role hasn’t been fully settled, but he will essentially be community outreach manager, said Savage.

“Everybody knows him and he knows most people and he will continue to represent us in that important way in the community,” said Savage.

The Forest Society will not be hiring a replacement for Manley and will instead hire a new Christmas tree farmer, whose time will be spent on growing, maintaining, harvesting, and selling Christmas trees, which itself is a significant undertaking, said Savage.

“You’re always dealing with weather things and you have to keep up with markets, wholesale as well as retail,” he said. “It’s a busy job.”

The new farmer will be in a full-time, year-round position.

“We are doing that in part because we want to commit to someone who will be with us long-term like Nigel has been,” said Savage. “I perceive it would be more difficult to find a seasonal Christmas tree farmer. I think we need to provide somebody with a full-time job and benefits so they’ll commit to us long term.”

Going forward this year, SPNHFs intent is to break ground on the revamped Carriage Barn in May, an estimated $8 million project that is expected to take 12 to 14 months to complete.

“Next spring, we will be looking at hiring additional staff, and I think there will be other existing Forest Society staff who will then populate that building,” said Savage. “During our board meeting last week, our board reiterated their commitment to seeing this through. We’re raising the money and that seems to have momentum now … We are now signing construction contracts.” By late 2021, a new amphitheater, landscaping, and parking area were completed. Previously completed was a new garage workshop at the current Christmas tree farm headquarters near the red house and barns by Route 302.

Read the article in the Caledonian Record (subscription required).