Even in death, lightning killed-trees live on.
Dave Anderson
Natural Resources
For Landowners 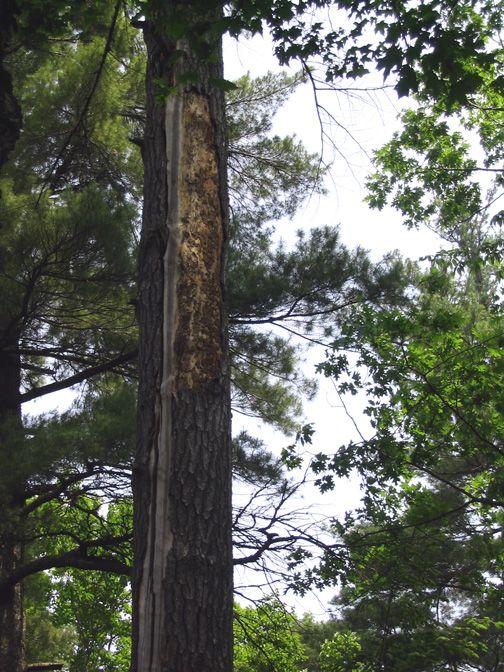 "When the lightning strikes... can you hear the thunder?" - Aerosmith Photo Dave Anderson

There’s a thunderstorm brewing – I can feel it.

Anticipation builds on a sultry, early summer afternoon. The air is thick but an approaching cold front promises relief from oppressive heat and humidity.

By late-afternoon, thunderheads billow like the tall sails of galleons floating east to the Atlantic. The dark cloud armada descends from the hills of Vermont to make landfall in New Hampshire. Thunder booms in the distance. The birds grow silent and the leaves rustle ominously as the sky grows black.

With an audible rush of wind in the trees, the storm arrives

Flash! A jagged bolt of lightning stabs King Ridge on the western horizon Lightning inspires an adrenaline rush of fear. The air is electric.

“One thousand five…” Boom! The leading edge of the storm is a mile away. I hear the curtain of rain approaching, rippling the foliage as it moves down the Lane River valley. The first fat raindrops spatter the late summer dust coating every surface. It’s time to get inside… quickly. 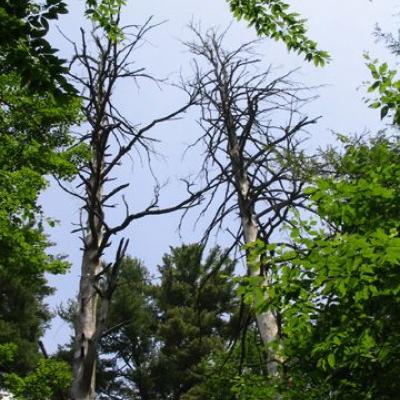 Crackle-BOOM! A simultaneous flash of lightning and roar of thunder rattles the windows. Lightning spirals down the wet trunk of a prominent white pine near the house. The tree splinters violently down its center as the sap boils in the wood. The top explodes and falls to the ground in pieces. Farther down the trunk, the bark is blown-off and scattered like shrapnel. The exposed sapwood glows yellow in a newly opened fissure. Small stones and soil are thrown clear like exclamation points from the base of the trunk where the lightning reached the ground, ran along a root and dug a furrow in the soil.

The mighty pine is smoked! Stone dead in a split-second.

White pines are usually the tallest trees in the forest in New Hampshire. They make excellent hunting perches for hawks and owls and are used by turkeys for night roosts. They’re also natural lightning rods. You do not want to stand beneath one during a thunderstorm! 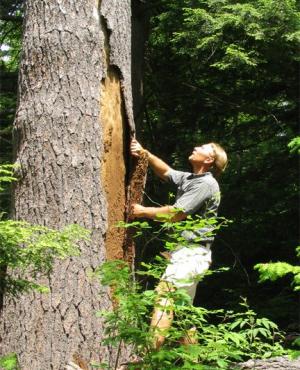 Heat-killed trees create a special feature in a forest. Like trees scorched in a fast-moving ground fire, an electrocuted pine will eventually shed its bark in large plates to reveal cooked sapwood beneath. The seared pine pitch seals the heartwood, like varnish, against moisture and the beetles that specialize in boring tunnels in dead pine. Unlike pine logs that fall and rot in the dense shade of the forest floor due to insects and moisture, standing dead “snag trees” that were heat-killed by a fire or lightning strike may remain standing for decades.

After insects eventually penetrate the veneer of cooked sap and woodpeckers chop larger holes in the stem, lightning killed snags provide a durable wooden apartment complex for a variety of cavity-dwelling birds and small mammals. Cavities inside the smooth, bark-free gray ghosts are used by woodpeckers, flycatchers, and owls for nesting and by bats as nursery colonies and day roosts. Squirrels, raccoons, porcupines and fishers use lightning killed snags for dens.

After the storm, the air smells like burnt electrical wires and wet asphalt. Ragged white shards of clouds race east trailing lighting and the fading rumbles of thunder. The rain tapers off and the sky clears. A biblical shaft of sunlight from the west floodlights the arc of a double rainbow across the valley. Birds resume chirping as mosquitoes emerge from damp woods with the first tinge of autumn in the cool evening air.

Fallen limbs lie shattered on lawns amid wind-torn leaves. The effects of the storm are limited to a few downed trees and power lines. No homes were seriously damaged. No people were injured. Severe summer thunderstorms in New England rarely wreak the havoc more common in the Midwest.

We’re lucky – the temporary disruption of telephone, cable and electric service and the need to rake or chainsaw storm debris are relatively minor inconveniences compared to roofs torn off and cars flipped.

But for prominent trees on exposed hills, ridges and growing along the edges of fields, lakes and roads, these severe summer thunderstorms can be fatal.

People instinctively seek cover when lightning threatens. No such luck for trees. It’s not easy being green… and tall… and deeply-rooted. 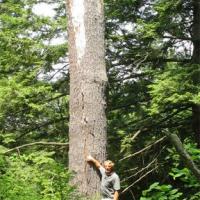 Even in death, lightning killed-trees live on.

Lightning snags furnish homes for new generations of wildlife. In the woods, every ending is a new beginning. Large old dead and dying trees are considered to be a “biological legacy,” an integral part of a healthy forest.

Just because a tree is dead, doesn’t mean it isn’t any good.