Paddling to the Past 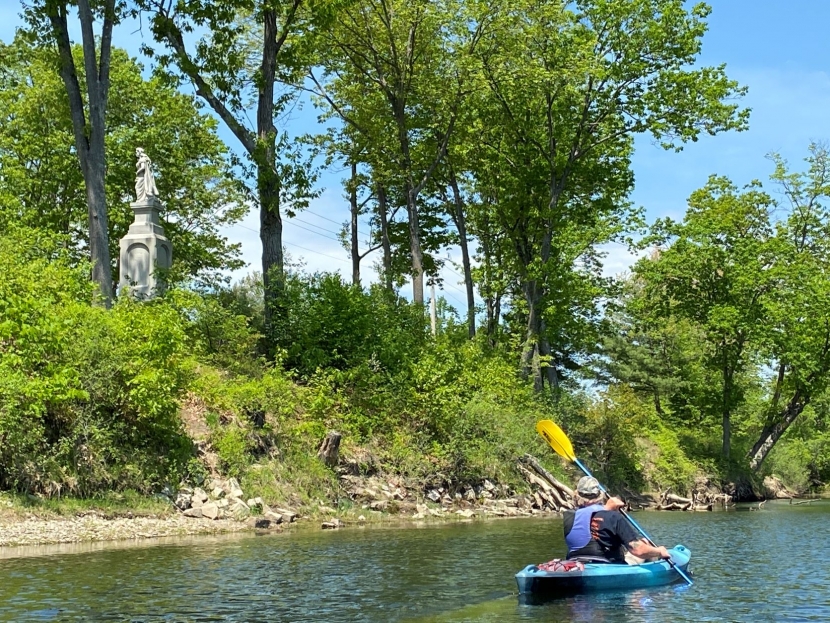 One of the Merrimack Paddle Challenge excursions takes participants past the infamous Hannah Duston Memorial, one of many historic points of interest that is highlighted on the Indigenous NH Collaborative Collective’s StoryMap. Here, the Forest Society’s Dave Anderson, senior director of education, paddles near the site in Boscawen. (Photo: Carrie Deegan)

For centuries, the history of the Abenaki people has been intertwined with the Merrimack River. As the head speakers of the Cowasuck Band of the Pennacook-Abenaki people describe, the Indigenous peoples of the region were the first caretakers of this mighty waterway and stewards of the natural world. “

We were true conservationists,” says Paul Pouliot of the Cowasuck Band. He goes by the tribal title Sag8mo, which translates to head male speaker/grand chief.

But that environmental legacy isn’t only in the past tense. “We try to expand the education being taught to show that we had a sustainable lifestyle and it’s possible to go back to that today,” says Denise Pouliot, the Sag8moskwa (head female speaker) of the Cowasuck Band. 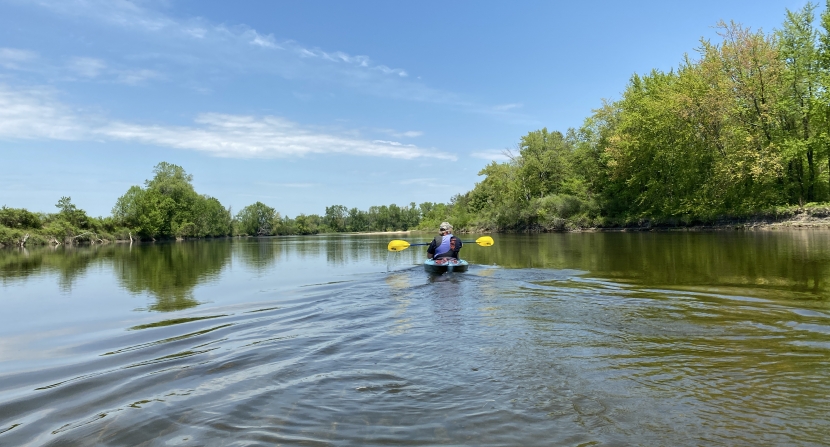 Paddling the Merrimack River and its tributaries – including this protected wildlife management area in Canterbury called Muchyedo Banks – offers an inside perspective on past and present efforts to protect the watershed. (Photo: Carrie Deegan)
Their educational initiatives, developed as members of the Indigenous NH Collaborative Collective, have included the creation of a Harvest Calendar curriculum and a digital StoryMap of Indigenous heritage sites across New Hampshire. Five of the historical sites are in the Merrimack River watershed, including the Hannah Duston Memorial State Historic Site in Boscawen, N.H. Since 2020, the Cowasuck Band, who are based in Alton, N.H., has been working with New Hampshire State Parks, historians, local officials, and Duston’s descendants to “reconstruct the park into a space that highlights a deeper understanding of place and New Hampshire history.” The working name is “Unity Park N’Dakinna.”

The area of land that the state of New Hampshire and other parts of New England and Canada encompass, called N’Dakinna, is “the traditional ancestral homeland of the Abenaki, Pennacook, and Wabanaki peoples, past and present.” According to the Cowasuck Band, the Wabanaki were divided into the Western Abenaki, who settled west of the White Mountains in New Hampshire, Vermont, and Quebec, and the Eastern Abenaki, who settled in Maine, Nova Scotia, Newfoundland, and New Brunswick.

The Cowasuck, meaning the ‘people of the white pines,’ were located in the upper region of the Connecticut River. The Pennacook, also called Merrimac, were located around Concord, N.H., and north-central Massachusetts. The name means ‘at the bottom of the hill.’ Four centuries ago, Indigenous villages flourished along the Merrimack River around the outflows of each of the waterways. (See a Merrimac River watershed map created by historian David P. Mill and shared by Indigenous NH here plus the corresponding Abenaki place names.

Another heritage site on the Indigenous NH StoryMap, Manchester’s Amoskeag Falls, was the site of one such villages in the seventeenth century. According to research cited by the Collective, Chief Passaconnaway of the Pennacook established his tribe’s capital, called Namoskeag, at the falls around 1620.

“Picture seeing wigwams and longhouses,” notes Denise about what life on the river was like before colonial contact. “Envision a different kind of environment.” Wigwams were built with a conical frame of tree saplings covered in birch bark while longhouses were larger dwelling structures. The Pouliots recently led the creation of a traditional wigwam using flexible red maple saplings at Strawbery Banke Museum in Portsmouth.

The population of Indigenous peoples living near Lowell and Haverhill, Mass., ranged from 10,000 to 20,000 in the early 1600s. “These [people] were the first impacted and forced out,” Paul says. Prior to colonial contact, Denise says fishing was the main staple of Indigenous peoples, but when the colonials began building dams, their food source was depleted causing many people to starve. Conflict was a direct result of those actions, she adds. “The waterways mean a lot to our people—not just in a cultural manner,” Denise says. “Waterways were our highways and foodways.”

To restore these areas to their natural state, the Collective has been advocating for the removal of dams from some of the region’s rivers and lakes. “We’re looking at bringing [free-flowing waterways] back as a food source,” Denise says. When dams are removed, the sediment that has built up behind them will get washed downriver, she explains, adding that more fish will have the ability to spawn upstream as a result and other life forms will flourish.

The Pouliots successfully advocated for the removal of a dam on the Exeter River and currently support the removal of Mill Pond Dam in Durham. The issue can be controversial in communities where dams provide hydropower or flood control, but they point out that public safety, maintenance expenses, ecological damage, and restoration of fish ways should be considered more carefully and favorably. The Pouliots said they hope there is a way to remove unnecessary dams, affirming both the Indigenous community and the needs of modern society.

See It For Yourself 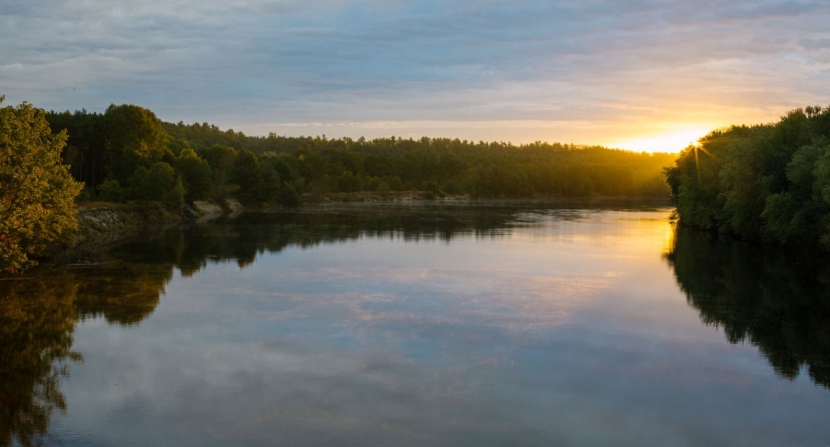 The Forest Society released a documentary about the challenges facing the Merrimack River watershed (pictured) in 2020. (Photo: Emily Lord)
The best way to get up close and personal with the river and its history is to paddle it. That’s why a group of conservation organizations launched the Merrimack Paddle Challenge this summer. Presented by the Forest Society, Five Rivers Conservation Trust, Lowell Parks & Conservation Trust, and the Merrimack River Watershed Council, the challenge includes five excursions, from four to nine miles long, on the river and its tributaries. The challenge also connects paddlers with educational resources such as the Forest Society’s recently released documentary The Merrimack: River at Risk and the Indigenous NH StoryMap.

“By encouraging paddlers to get outside and float the Merrimack River this summer, we aim to advance an important dialogue about what communities can do to restore this vital waterway,” says Carrie Deegan, Forest Society reservation stewardship and engagement director. “With gratitude to the Abenaki, Pennacook, and Wabanaki peoples, who have stewarded the land and waterways of the N’Dakinna for centuries, we hope participants in the Merrimack Paddle Challenge will gain a renewed appreciation for those who have worked to protect the watershed for generations and are motivated to do their part.”

Anna Berry is the digital outreach manager for the Forest Society.