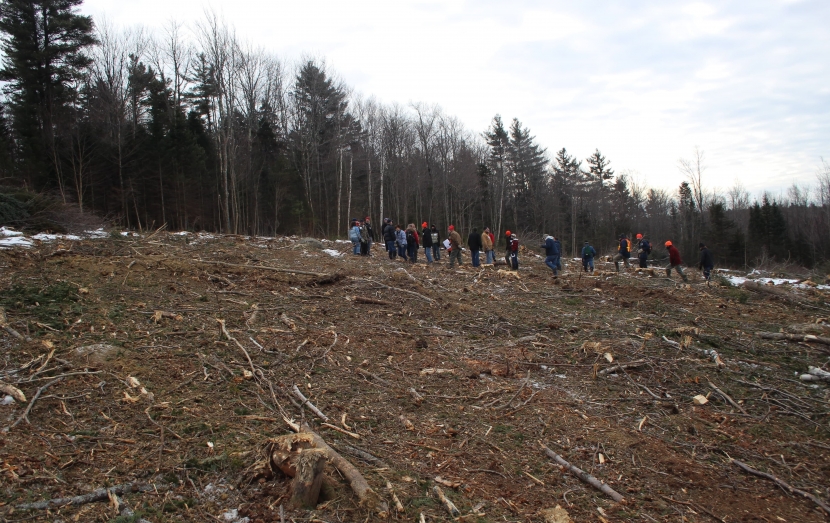 In December 2015, the Forest Society began harvesting timber from the southern part of the Ashuelot River Headwaters Forest in Lempster.  The Forest Society acquired this 1,827-acre gem in 2010, and the forest management plan was completed in 2014.  This harvest is the first of several planned entries over the next few decades.  Licensed forester Jeremy Turner of Meadowsend Timberlands is administering the harvest, and the wood is being cut by loggers D.H. Hardwick and Sons.

The warm winter we’ve been having has caused this operation to stop and start multiple times.  Cutting, skidding and yarding is only taking place on days when the ground is sufficiently frozen to allow for the use of heavy machinery.  This precaution (which is not necessary on all sites) is to protect the site’s moist, cool soils from rutting and erosion.

The property has a conservation easement held by NH Fish and Game, which stipulates that creating and maintaining habitat for wildlife is a primary goal of our management.  The Forest Society always manages land with wildlife in mind, but this is one of our reservations where it really rises to the top of our objectives.  One of the ways we aim to accomplish this objective is by creating “patch cuts,” where all trees are cut within a given area.  A patch cut that is large enough (say more than 10 acres) is called a "silvicultural clearcut."  Foresters refer to a small patch cut (under half an acre or so) as "small group selection."

So how does patch cutting benefit wildlife?  First, it’s helpful to realize that the best way to increase wildlife diversity is to increase habitat diversity.  A greater variety of habitat types provide niches for an increased number of wildlife species.  Currently, the Ashuelot Forest (and much of the surrounding landscape) is overwhelmingly made up of middle-aged or mature forests.  This is great habitat for many species, but it is not so great for other species that live in young forests or shrubland.  Furthermore, many of the species that require young forest habitat are in decline across New England.  The dense thickets of brambles and tree saplings that regenerate following patch cutting or clearcutting provides habitat to these animals that are otherwise absent or scarce on the landscape.  Priority species that we expect to benefit from patch cutting include veery, wood thrush, purple finch and several bat species, which use these young forest areas to feed and forage.

The largest patch cut (about 4 acres in size) was created in an area that contained a high density of aspen trees.  When cut, these trees exhibit a hormonal response that results in dense root suckering (young saplings sprouting directly from the cut stump).  Regenerating aspen stands are excellent wildlife habitat for species such as ruffed grouse, which feed on the large, nutritious buds and seek cover in the dense understory.  We also expect species such as American woodcock, Canada warbler, wild turkey, and bobcat to benefit from the increased early successional (i.e. young forest) habitat.

This timber harvest will use a variety of silvicultural techniques to treat approximately 195 acres of the Ashuelot River Headwaters Forest.  Briefly, the other objectives of this harvest are as follows:

If you would like to learn more about the planning and thought that went into this timber harvest or any others on Forest Society reservations, please contact us.  We are always happy to talk about careful, sustainable forestry.