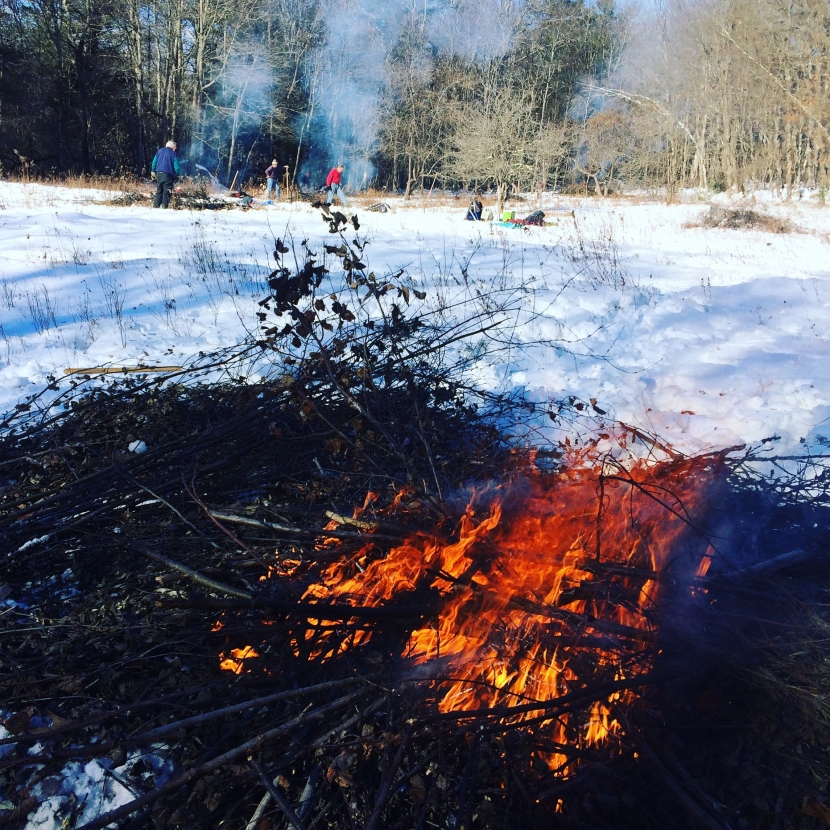 When I arrive in Jaffrey on Dec. 20th, the last day of autumn, it's -3 degrees Fahrenheit. I don’t plan on being cold for long but I stay in my car for an extra minute.  Soon other pickup trucks roll in. Four faithful land stewards pull up alongside Forest Society staff. They greet me with smiles and go right to loading up tools.

In this weather you don’t waste much time before getting moving. But despite the cold, host Hiel Lindquist, the volunteer land steward for Gap Mountain Reservation, says he's enjoying being outside. Kindling, accelerant, shovels, and rakes pile onto children’s plastic sleds. Equipment drags with ease along snowy trails with the help of the basic kids’ toy. At the edge of the field we look out to the seven piles of brush that accumulated during a volunteer workday in late August. On that day, saplings that were crowding into a former apple orchard were cut to give the apple trees less competition for sun and nutrients.

Some of the saplings were early-successional trees taking advantage of the sun beaming in through the opening.  But then we noticed we were also cutting another species. The incessant glossy buckthorn was making up a good portion of the woody stems moving into the field.  This non-native, invasive species was not just infesting the field edges, but it was also bearing fruit.  We knew we had to plan for a burn to destroy as much of the seed crop as we could. 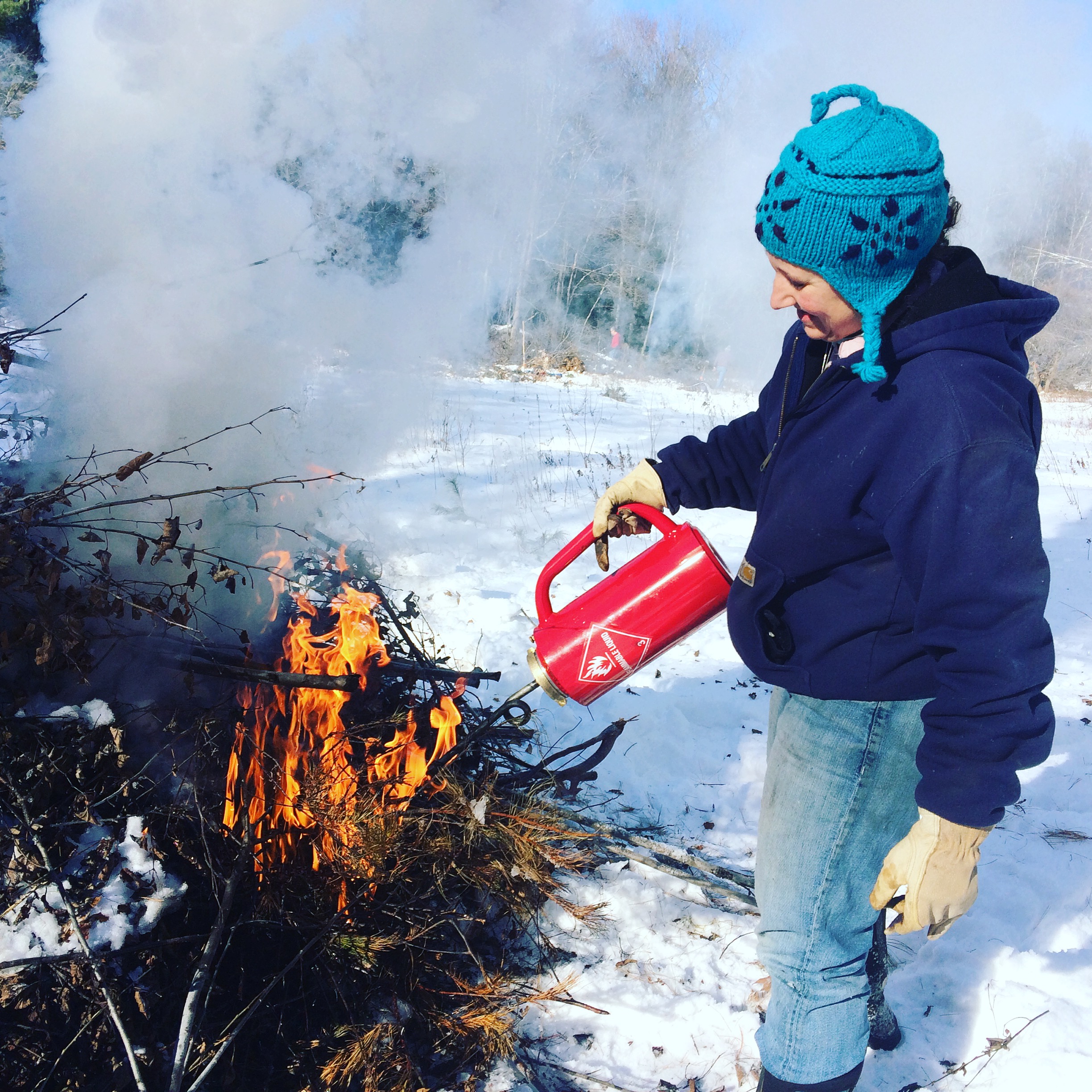 Wendy Weisiger, the Forest Society's managing forester, flicks the lighter, and uses a drip torch to start one of the seven piles. Volunteers begin breaking sticks and twigs and tossing them on the flame for some quick heat. Heil has brought some dry tinder to feed into the early blaze. Stewarding this reservation has helped Heil become very familiar with the 1,120 acres that make up Gap Mountain.

I ask him “what’s the best spot?” Although he doesn’t have a favorite spot, he has some recommendations on what to check out: “The living room is worth a visit” which is "near the middle peak, with rocks shaped like sofas.”  And of course the “views from the north and middle peaks are very nice.”

Today though, our eyes mostly fixed on the fire. We hear plenty of crackles and snaps coming from the pile and we know this green wood will take a lot of attention to get going. The drip torch is passed among the piles to get a few started early. 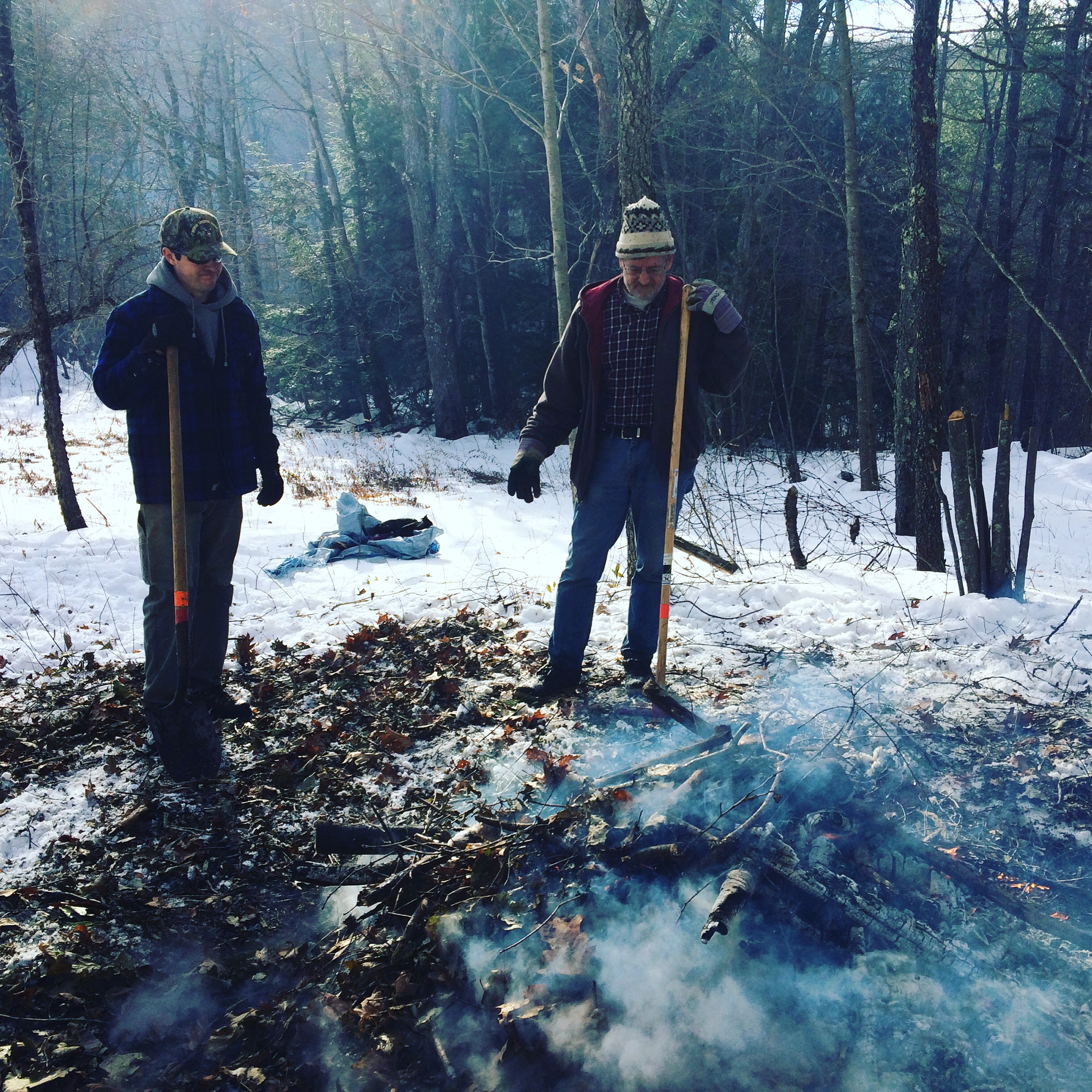 Bart Hunter, land steward of the nearby Heald Tract, takes the torch to the largest pile. Flame drips off the torch and dissipate quickly after reaching the wet brush. Hiel quickly jumps in to feed and fan the flame. Sure enough I find myself removing layers of clothing while standing an arm’s length away from what is now a small blaze. We are feeding pretty steadily but the pile doesn’t seem to get any smaller, yet.

I leave the largest pile to check in on the others’ progress. Walter Weeks, steward of Dickinson Memorial Forest in Swanzey, stands over a small pile of smoking brush. He throws a few more sticks on the flame. I’m already impressed with his progress when he tells me he’s been feeding that flame with the brush from two piles! Maybe we will get out of here before the sun sets. Being almost the shortest day of the year, sunset is at 4:13 p.m.

Land Steward Len Martin of Pembroke rakes some coals around before agreeing with other fire-tenders that it’s about time for lunch. All the brush piles are now burning vigorously enough that we can step away for a quick hotdog roast. Luckily there is still enough woody debris to grab the perfect roasting stick. Staff and volunteers stay close to the coals while enjoying lunch. Len explains he traveled an hour and a half to enjoy some outdoor work and good company before the holidays. 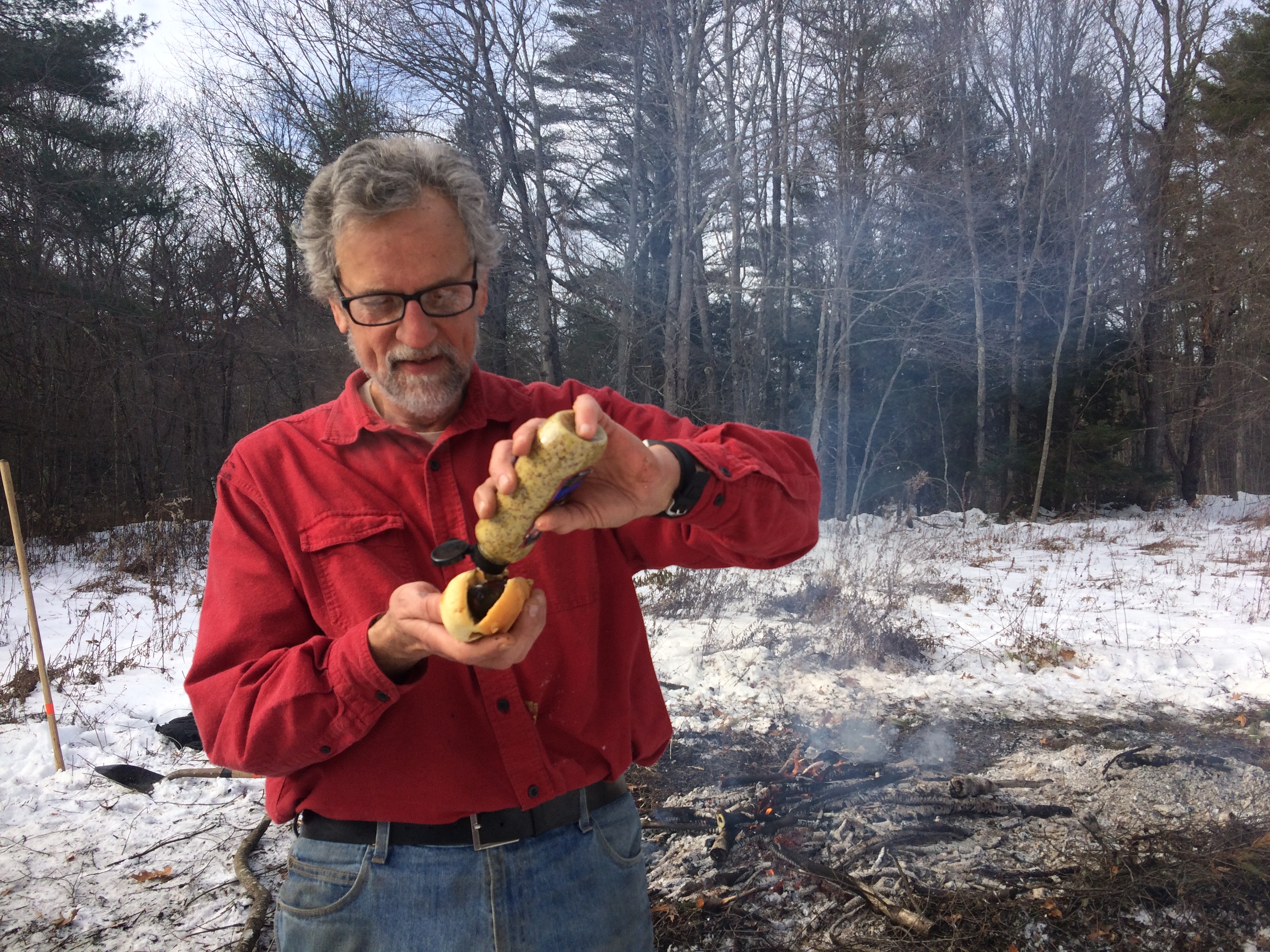 After a hotdog or two, volunteers get right back to work. I don't even have to ask these guys! The number of burning piles dwindles as more and more are reduced to smoldering coals. I pitched this workday as a "relaxing day by the fire"… Maybe these hardy stewards saw past my fluffing, because they work diligently the whole day.

Walter and Heil stay until the very end making sure the woody stuff is gone and we are out of there by early afternoon!

I head back to the office and see reports from some of the other land stewards who are still sending in notes after visiting their reservations. The trails are still easily hikable in the winter months (sometimes with traction or snowshoes) often because of these stewards that maintain the trail corridor. Bill Glazier, land steward of Kennelly Forest reports that he "cut numerous saplings that were bending into the trails as well as picked up downed branches on the trail."

But this is just one instance of the routine maintenance land stewards do throughout the year. Hikers are probably unaware that land stewards play such a big role in keeping trails looking great. If you ever get a chance to meet a steward on one of our trails, be sure to ask what to see on the reservation and certainly express your gratitude. 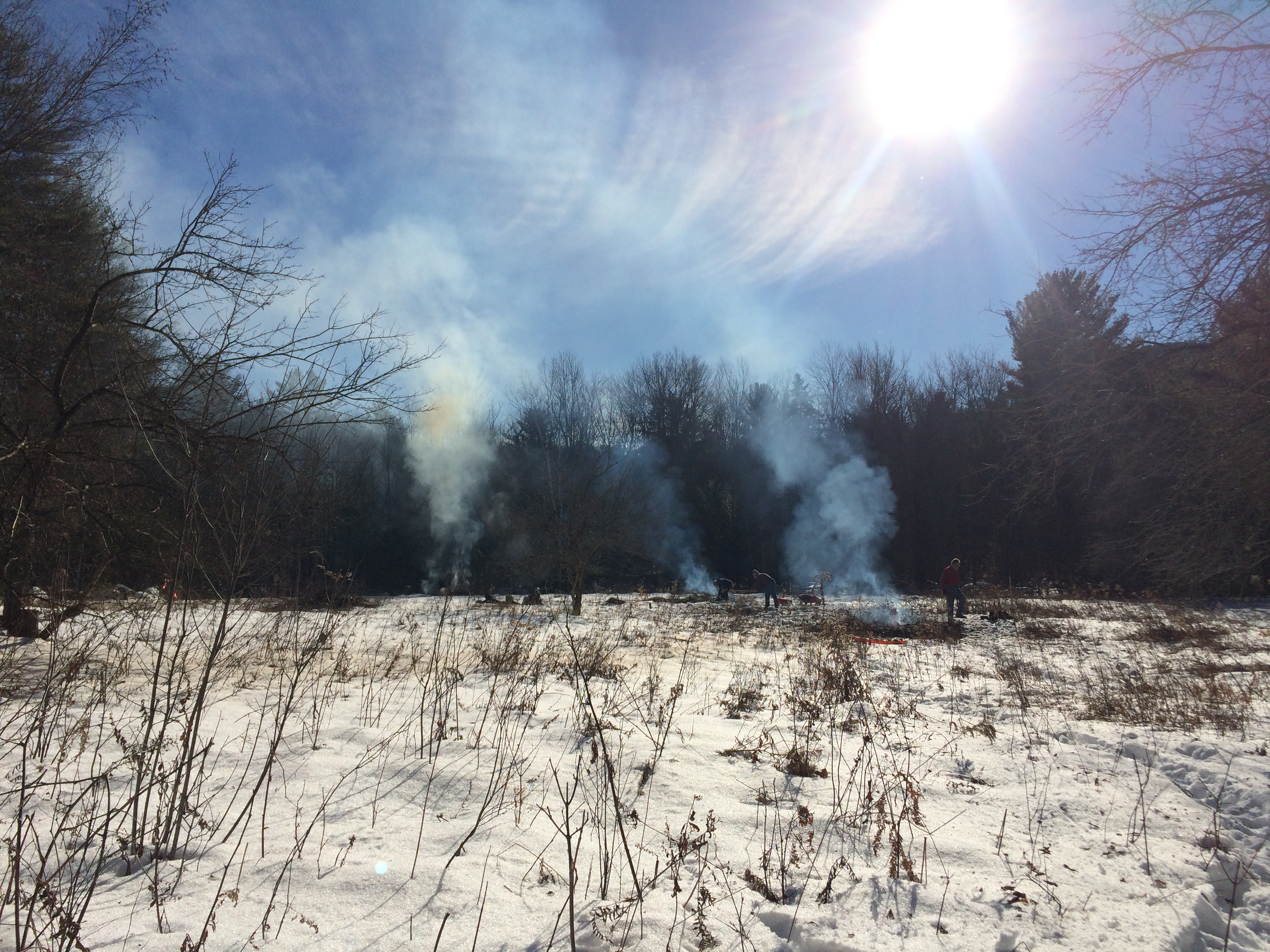