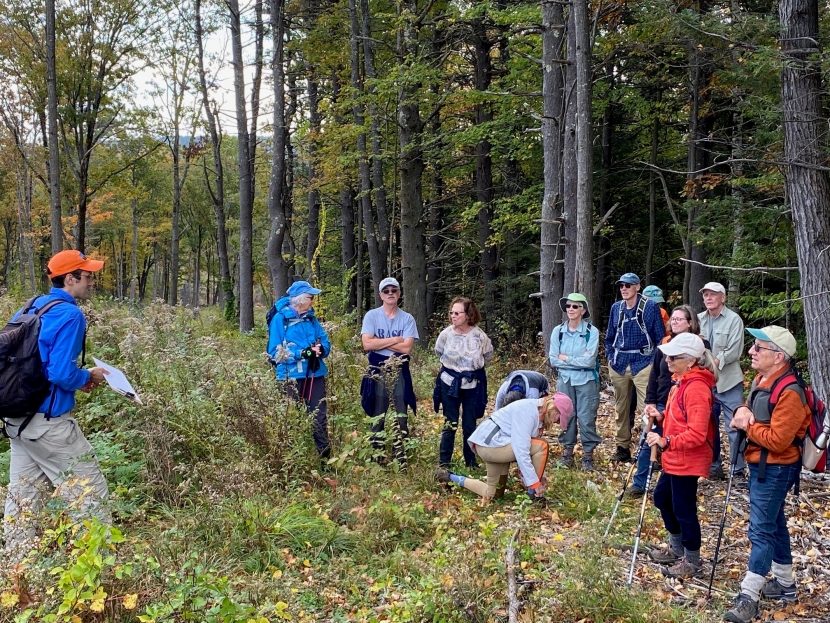 Forest Society members at the Heald Forest Reservation in Wilton on October 21 view a clearing, now a goldenrod and wildflower meadow managed for insect pollinators at edge of adjacent white pine forest.

The Forest Society recently welcomed the opportunity to once again offer LIVE and IN PERSON outdoor hikes to small groups of our members during a members-only hiking series in late October.

A special tour of the Heald Forest Reservation in Wilton and Temple was led by Field Forester Gabe Roxby to focus on the extensive foresty and wildlife habitat management activities on a portion of the sprawling 1,492-acre property.

The Heald Family donations of the land between 1986 and 2016 was one of the most generous land gifts in Society history. At the Heald Tract, cellar holes, barn foundations, and former orchards are surrounded by mature forest, mountain laurel, beaver dams, vernal pools, a heron rookery and a 65-acre Heald pond linked by an extensive trail system.

From 2019 to 2020, the Forest Society began a series of ambitious projects to improve wildlife habitat, control invasive bittersweet and release apple trees. Our foresters launched a timber harvest experiment to favor high quality oak timber and invigorate an understory thicket mountain laurel to demonstrate potential for creating New England Cottontail habitat. This past summer, tree saplings were cut-back to favor flowers and grasses in an old field, as well as in a former orchard to create a pollinator meadow. 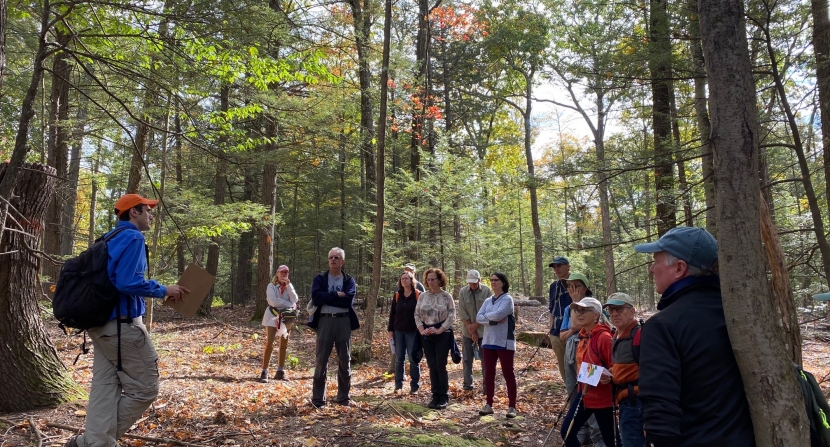 The subsequent hike for Forest Society members was held at the Forest Society's Powder Major Forest located at the confluence of Madbury, Durham and Lee town boundaries and with frontage on the Oyster River. The hike began with a visit to the adjacent, privately-owned Powder Major's Farm property conservation easement hosted by landowner Charles "Chuck" Goss to visit the historic DeMerritt Family cemetery and grave of Revolutionary War figure John "Powder Major" DeMerritt.

The private land accessed by permission also facilitated a visit to the rarely-visited "Moharimet Rock" or "Council Rock" landmark alleged by local lore to have been the exact location for early meetings of Europeans with Native Abenaki Sachem, Chief Moharimet. The rolling, fertile land along the intervale of the Oyster River is by local historical accounts an ancestral "planting grounds" of the original indigenous peoples of the Seacoast region.

Powder Major's Forest was protected by the Forest Society in 2017. Features include a network of recreational trails, Oyster River frontage, a beaver pond and cultural features.

The farmlands under a conservation easement at Powder Major’s Farm were home to Revolutionary War hero Major John Demeritt, aka “The Powder Major” celebrated for his role in the raid on British Fort William and Mary in Portsmouth. Demeritt is credited for hiding the stolen gunpowder on his Madbury farm and transporting it to the Continental Army fighting in the Battle of Bunker Hill at the outset of the American Revolution. Subsequent generations of the Demeritt family and the Goss family have lived and farmed here on the historic landscape.

Hiking participants and staff enjoyed the relative warmth of sunshine and lingering late October foliage in both the Monadnock Region and Seacoast Regions of southern NH as well as the opportunity to be together hiking outdoors safely in fresh air while in small groups. 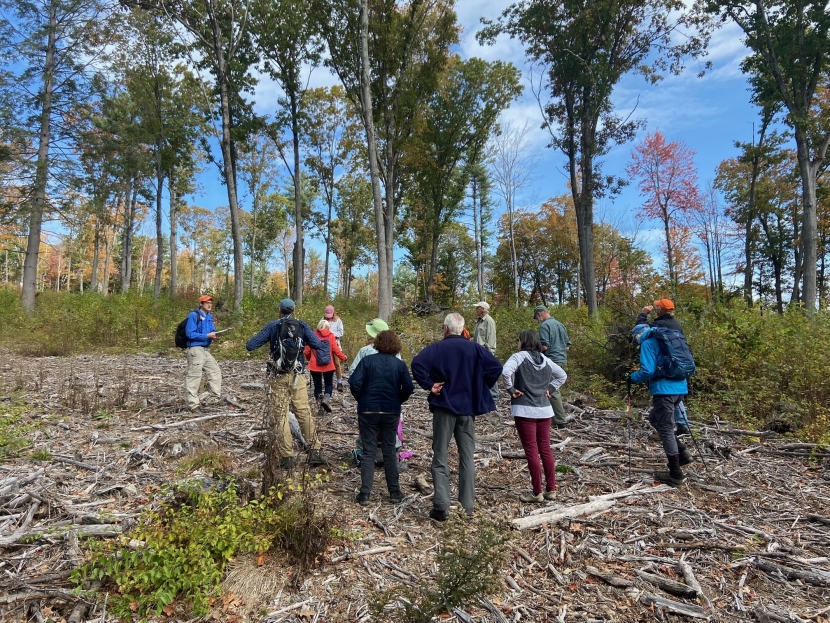 Field Forester Gabe Roxby spoke about the wildlife habitat restoration project, among others, at Heald Tract.