Keeping a Pioneer in View 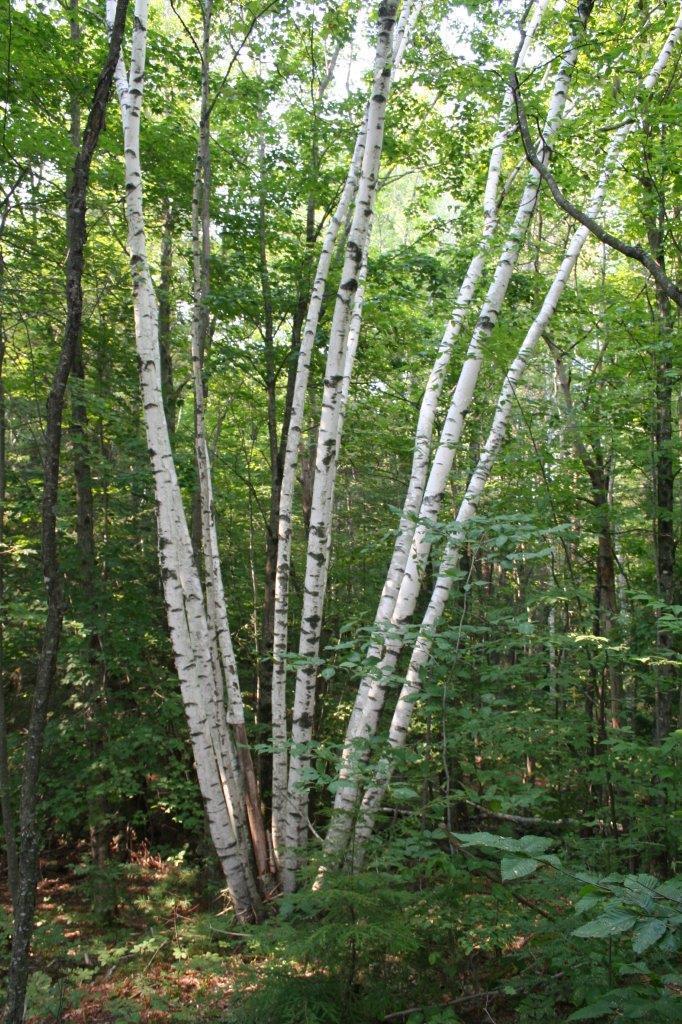 Forest Notes was 10 years old when the paper birch was made New Hampshire’s state tree. In the 1940s the tree was not only popular, it was populous.

You will see lots of references to 75 years in this magazine. It’s a noteworthy anniversary, the diamond anniversary. Nearly two-thirds of the timberland acres in New Hampshire are populated with forests that are very near or have already celebrated their 75th anniversary, according to the 2011 USDA Forest Service Forest Inventory and Analysis (FIA) data.

Seventy-five is also the average age of a paper birch or aspen tree that has begun its decline. While the more shade-tolerant maples, oaks, pines, beeches and hemlocks are just hitting their stride as adults (oaks can live two centuries or more), the aspen-birch forest is headed toward that old, punky wood pile in the or in the duff.

Why does that matter, you ask? Well, the aspen-birch forest type provides early successional habitat that caters to a unique set of wildlife species, some of which are not found in the later stages of forest succession. Succession is the cycle of changing forest conditions that occurs on a site as the trees and shrubs grow older, fall from dominance, and are replaced by other species that are usually more tolerant of shaded growing conditions.

Among the hardwoods of New Hampshire succession starts with aspen and paper birch (the pioneer species) and progresses through the maples and longer-growing birches (yellow and black) until the end game is reached and beech becomes the dominant species. Barring any natural or man-made disturbance, beech will continue to regenerate underneath itself and become the climax species in a hardwood forest.

By definition, early successional forests are only around early in the process and then they disappear. With their disappearance wildlife species that depend on the type will also disappear. We don’t see large stands of paper birch anymore and we also don’t see as many ruffed grouse and woodcock, kestrels, flycatchers and New England cottontail rabbit.  Currently New Hampshire has about six percent of its timberland in early successional tree species but the majority of those trees are too old to provide the required habitat values.

What’s driving the aging of our forests with fewer small openings? As individual ownerships shrink in size through subdivision, they become too small to manage for a variety of habitat types. Agricultural use of land has declined, leading to fewer openings being maintained in brushy or early successional species. And despite the use of pellet stoves and wood-to-energy plants, the use of wood as a fuel has declined. These and other reasons led Mariko Yamasaki and Richard DeGraaf, in their 2005 publication Landowner’s Guide to Wildlife Habitat, Forest management for the New England Region, to comment that “in order to keep early successional habitats on the landscape for the wildlife species that need them, we need to intentionally and continuously create them.”

It’s also true that what used to be a huge market in the New Hampshire for ‘turning stock’--golf tees, popsicle sticks, tongue depressors, veneer for cabinets, etc. -- has dried up and the commercial value of paper birch is a shadow of its self.

With help from a grant from the Natural Resource Conservation Service (NRCS) the Forest Society will be able to intentionally create several new areas of early successional habitat that will be sited to enlarge existing stands of aspen and paper birch. Two of these sites have been selected so the activity will also improve the existing forest condition, which is extremely poor due to past cutting practices that occurred prior to our ownership. The opportunity to cure two situations with a single activity always plays pretty well in our work plans.

Forest Notes was 10 years old when the paper birch was made New Hampshire’s state tree. In the 1940s the tree was not only popular, it was populous. But its numbers have been in steady decline ever since. It’s a pioneer and a somewhat ephemeral one. Being ‘intentional and continuous’ in our creation of early successional habitats means keeping paper birch in its rightful location; somewhere within our view at all times.

George Frame is the Senior Director of Forestry at the Society for the Protection of New Hampshire Forests. He can be reached at gframe@forestsociety.org.