The Butternut: A Lament for the Tastiest Nut 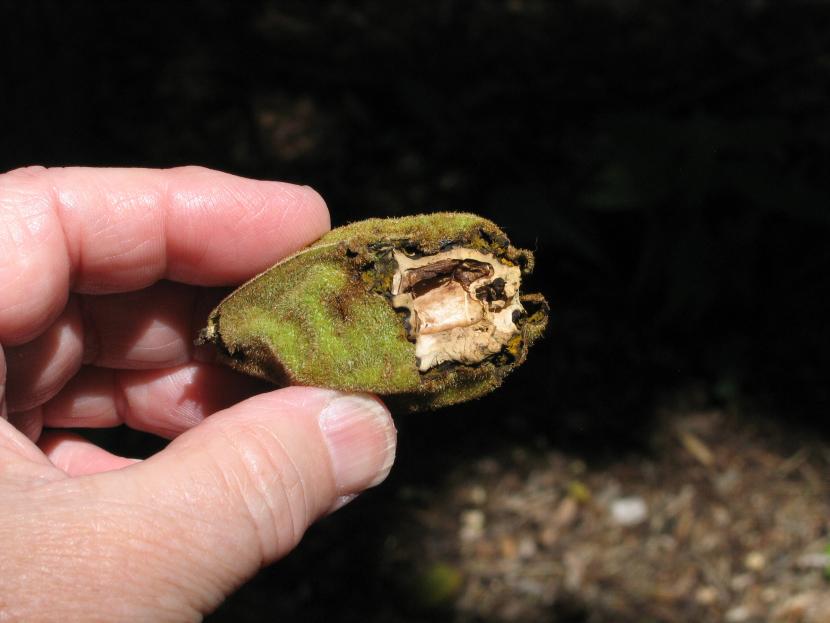 I’ve written several times in this column and elsewhere about change and how it upsets what we see as ‘our’ world.  But there has been at least one significant change which, it seems to me, may not have been noticed by most.  We are in a swivet about emerald ash borer and Asian long-horned beetle, and there are conferences scheduled on the next spruce budworm outbreak, and there are tomes being written on adapting to the changing climate and building resilience and resistance into the natural world, but whatever happened to our concern and outrage over the impacts of Sirococcus clavigignenti-juglandacearum?

Because of this little fungus, and a few tag-along friends, we no longer have the company of healthy, productive butternut trees (Juglans cinerea).  The butternut canker is what we call the infection that began killing off the species sometime in the 1960s.  The dying of the butternut has taken a long time. But there is no outrage, no quarantines, no front-page stories, and I wonder why. Maybe I just missed them. I know for many folks the rewards were never great enough to work that hard to find the fruit within the nut of the butternut, but for me there was no better tasting nut fruit, and it was worth every bang of the hammer or turn of the vice.

The butternut ranged from southeastern Canada down the Atlantic seaboard into north Georgia, west beyond the Mississippi River and north to Minnesota, and back again to the Northeast. It never held a position of dominance in most stands, occurring within the mix of hardwoods several at a time, but nearly all the old farmsteads had a few planted around both for the nuts in the fall and perhaps for some furniture later on.

Now I read that there are no more butternut trees in North or South Carolina, it is on the list of trees of “special concern” in Kentucky, "exploitably vulnerable" in New York State, and "threatened" in Tennessee. With more than 90 percent of the butternut trees already dead and most of the others in trouble, we may be the last generation to see and know this beautiful and sometimes prodigious tree.

Anne Krantz, of the NH Big Tree Team, wrote in 2010 that more than 3,000 surviving butternut trees in New Hampshire had been checked for resistance to the fungal infection since 1996.  Unbelievably, of those apparently resistant trees only eight appeared to have significant ability to thwart the fungus. Cuttings from those trees were grafted onto black walnut root stock at two seed orchards in the state.  There were a few glimmers of hope as some grafts lasted from year to year, but now it seems the infection has struck them all.  Research dollars are gone as bigger issues in forest health take the public stage and divert the few dollars available.

There is little good news for the butternut tree, but strange and wondrous things can happen in nature.  We need only look at the continued advances related to the American chestnut or the American elm to see that a comeback is possible.  Is there enough concern for a tree that lacks the stature of the elm or the value of the chestnut?   Will the money come to rescue the butternut? Perhaps another state impacted as greatly as New Hampshire will find a way to keep this species in our hardwood mix. Perhaps, even now a small butternut in Georgia, Tennessee, or New York is thriving in the fungal rich air. For that we can only hope.

Why didn’t we notice sooner?  Was the demise too slow? Was it economics?  Aesthetics? Were there not enough of them to affect our view of the forest? Is it so hard to grab our attention these days? Was it just too much work to get the fruit from the nut?