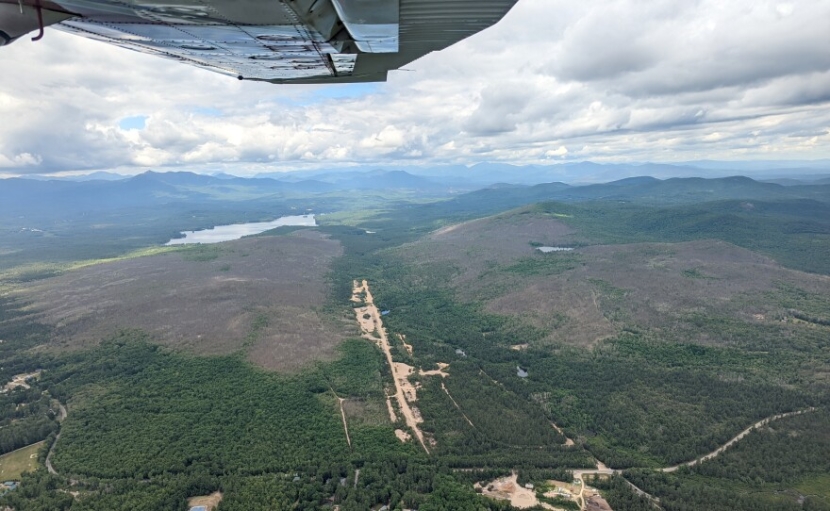 "Something Wild" is joint production of NH Audubon, The Society for the Protection of New Hampshire Forests & NHPR. We recommend listening to it in its original format on NHPR but a transcript of the show is also below. (Originally aired June 3, 2022)

In certain parts of the state, you can’t miss the invasive caterpillars munching their way through the forest, just as they did last summer — when they defoliated 50,000 acres in New Hampshire.

Formerly known by another name that contained a racial slur, the Entomological Society of America has chosen a new common name for lymantria dispar: spongy moths.

“The reason it's called spongy moth is because of the appearance of the egg masses,” says Bill Davidson, forest health specialist with the New Hampshire Division of Forests and Lands. “They're just kind of spongy, hairy masses that cover everything.”

Davidson's been tracking the spongy moth infestation that has defoliated swaths of New Hampshire forests for the second year in a row. Last week, he surveyed some parts of the state by plane.

“I was flying over the Conway area, which is the most heavily impacted portion of the state right now," he told the Something Wild team. "We were able to see pretty extensive damage across the region, pretty similar, maybe a little more severe, from what we were seeing last year.”

Once the New Hampshire Division of Forests and Lands completes the aerial survey of the state, they’ll have an estimate of this year’s defoliation. 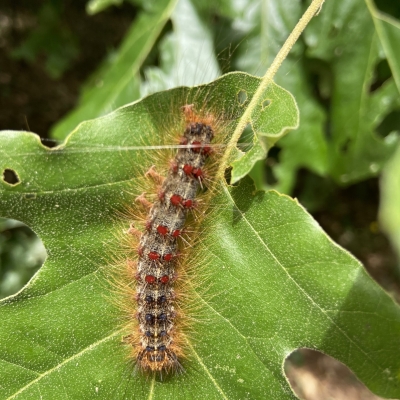 A spongy moth on a leaf. (Photo: Jessica Hunt, NHPR)
In terms of the trees most at risk, Davidson says spongy moths "heavily prefer the oak species," including red oak and white oak in New Hampshire. Once they exhaust those options, he added, "they will move on to some of those less preferred species, including some conifers.”

“Spongy moths have a very wide host range," Davidson says. "They're capable of defoliating or feeding on over 300 different species of trees."

“There are some pathogens that are the main controlling factors for spongy moth outbreaks," Davidson explains. "There's a fungus called entomophaga maimaiga, and also a nuclear polyhedrosis virus, that can eventually, once the caterpillar population reaches a critical mass, kind of run rampant and knock them back to their endemic levels where you don't really notice them that much.”

He says it could take several years for those pathogens to kick in — but when they do, "it'll be pretty noticeable."

Is there anything you can do if spongy moth caterpillars are chewing up the trees around your house?

“Really, the best thing to do is sit and wait,” Davidson says. “It's unsightly, and the caterpillars can be a nuisance, but the trees are pretty good at being resilient and surviving the defoliation event. You'll even see trees that get defoliated early; by the end of the summer, they will have put out a new set of leaves.”

As far as home remedies, Davidson says he sees people trying all kinds of approaches: putting burlap around trees, for example, or spraying insecticides. But, he says, it’s not effective against the caterpillar onslaught.

You might think the bird population would be taking advantage of this "all you can eat" caterpillar buffet. Our regular resident blue jays and Baltimore orioles do eat them, but most birds can't digest the large, hairy caterpillars. Some birds, such as the black-capped chickadee, feed on the spongy moth egg masses that serve as the caterpillars' namesake.

Cuckoos eat lots of spiny caterpillars. Their spines end up sticking to the lining in the cuckoo's stomach. In response, the cuckoos periodically shed their stomach lining, coughing it up in a pellet, like an owl.

Cuckoos are secretive and tend to perch motionless for a long time, so finding one can be really tricky. You're more likely to hear them first.

The cuckoo's reliance on unpredictable outbreaks of caterpillars, and following them as they eat their way through the forests, has implications for how they raise their young. Cuckoos have the shortest time from egg laying to fledgling - just 17 days. That's the shortest of any bird.

Whether we can expect to see extensive defoliation again next year remains to be seen.

“That's the million dollar question,” Davidson says. “We're just kind of waiting on those pathogens to kick in. If by the end of the summer, if we're seeing a lot of dead caterpillars, that's a good sign that the population is going to crash.”

It's also not clear what kind of long-term effects this defoliation have might have on New Hampshire forests. Davidson says “the real main threats" to local forests include emerald ash borer, hemlock woolly adelgid and other invasive insects.

“Despite the appearance of how bad some of these trees can look, the forest is resilient, and they should be fine as long as they're able to get new leaves out," he says. "And as long as the caterpillar population eventually comes down within the next couple of years, the oak forest should be fine."

Something Wild is a partnership of New Hampshire Audubon, the Forest Society and NHPR and is produced by the team at Outside/In.