Something Wild: Flying Under the Radar 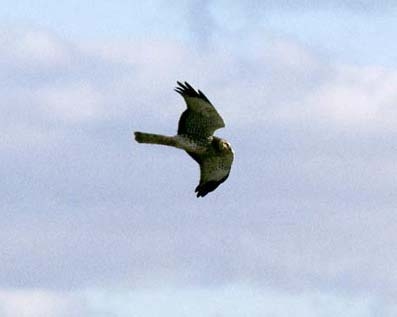 Sometimes called a Marsh Hawk, the northern harrier is currently one the rarest birds of prey nesting in the Granite State.

Unlike many of our more common hawks, harriers shun the forest, opting instead to hunt in wide-open spaces like fields, brushy areas -- even in marshes.  And get this --they build their nests on the ground.

Peculiar preferences indeed, and ones that have made it a challenge for them to survive here.

Flying under the radar is the modus operandi for harriers, both literally AND figuratively.

They hunt for voles, snakes, and small birds by skimming the landscape, gliding low over the ground, zipping just above North Country hayfields during the summer, and slipping in and out of coastal salt marshes in the winter.

Figuratively speaking, Northern harriers have largely stayed out of sight, and out of mind of wildlife managers...even though their populations across New England have been on the decline for decades.

So much so, that harriers are now considered endangered in New Hampshire.

NH Fish and Game is trying to reverse this downward population trend with a new raptor monitoring project in Coos County that focuses soley on harriers.

Usually when we talk about habitat loss for an endangered species, we think of swamps getting filled in or forests being cut down.  But in the case of Northern harriers -- it’s not that simple.

200 years ago, when New England settlers were first clearing land for farms, New Hampshire went from a landscape dominated by dense forest to one full of pastoral hills and meadows where livestock grazed.

Which is basically heaven on Earth for harriers.

Starting about a century ago, many of these farms were being abandoned.  Neglected fields began to re-sprout trees, and forests started to reclaim much of the landscape.  And with the state’s human population growth, open land soon developed into lawns and pavement, which is completely unsuitable for harriers.

The fact harriers build their nests on the ground doesn't help matters, either. Their eggs can be easy targets for raccoons and cats -- opportunists that thrive in subdivided land where people live.

So what's to be done?

To keep these birds a part of New Hampshire’s wildlife legacy, wildlife managers FIRST have to better understand where they are trying to nest, and what factors determine their success or failure.

Basically, we need to focus similar time and attention to these cool birds the way we have with more well-known raptors like Bald Eagles and Peregrine Falcons.

And hopefully with similar positive results!

For more information about Northern Harriers, click this link!