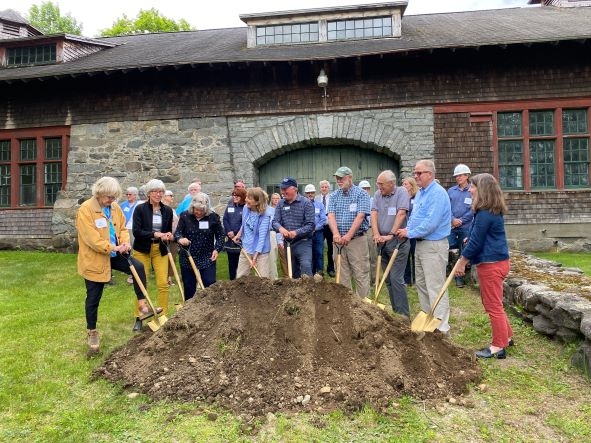 Current and former members of the Board of Trustees gathered at the groundbreaking, among many other well-wishers. 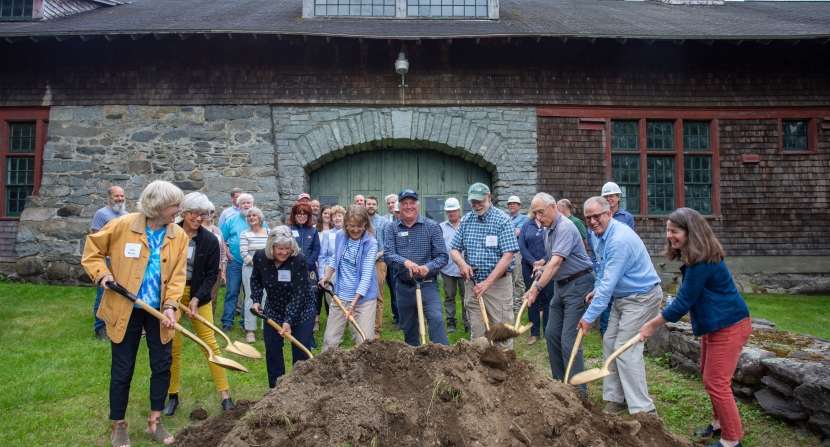 (Photo: Shanna Hale)
The next phase of transformation at The Rocks in Bethlehem is underway. On Thursday, the Society for the Protection of New Hampshire Forests officially “broke ground” on the renovation of the 1884 Carriage Barn as a new program and event center. The renovation of The Rocks is part of an $8.5 million campaign for “Forest Society North at The Rocks.” The campaign includes $6.5 million to support capital investment in the buildings and grounds and a $2 million program and operating endowment for the site. More than $4.5 million has been committed to the campaign to date.

“We are thrilled to be breaking ground today at The Rocks,” states Jack Savage, president of the Society for the Protection of New Hampshire Forests. “After the fire in 2019 that destroyed two historic buildings on the property, we are now at the point where we will write the next chapters for this landmark property. Not only will the renovated building be environmentally net-zero, but it will also be the home of the Forest Society North at the Rocks, our new offices serving the North Country. 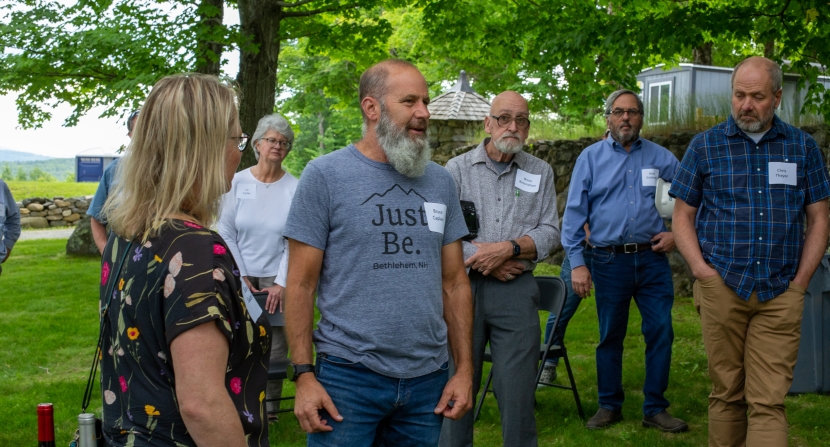 Many members of the community attended the ceremony to help celebrate the groundbreaking, including Bethlehem Selectperson Bruce Caplan. (Photo: Shanna Hale)
"A greater presence here will allow us to play a consistent role as a convener, educator, and economic engine in the North Country. With the announcement this morning by the New Hampshire Community Development Finance Authority (CDFA) that this project has been awarded state business tax credits, along with recent private commitments, we have secured over $4.5 million. Now that we are more than halfway to our goal, we hope the groundbreaking today will inspire others to support this exciting project.”

The renovated barn will retain its historic exterior and will be completely renovated on the interior as a net-zero building, with a geothermal system for heating and cooling and a solar array for electricity. The facility will offer an open gallery and gift shop, classrooms, event space, and offices for Forest Society staff who serve the North Country. One of the classrooms will be named the Jane A. Difley classroom, in honor of Difley’s 23 years of leadership as the Forest Society’s fourth President/Forester. The barn will also host public restrooms. 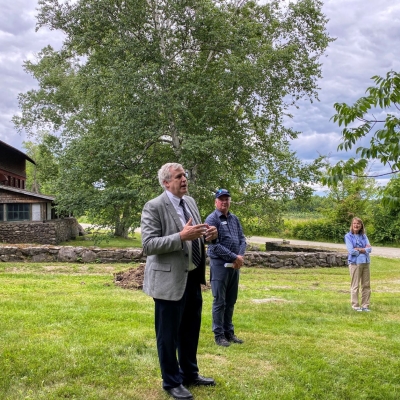 District 1 Executive Councilor Joe Kenney, of Wakefield, expressed his support for the project.
Originally designed by Isaac Scott and Herman von Holst at the turn of the 20th century, the renovation is designed by Samyn d’Elia Architects of Holderness and managed by Milestone Engineering & Construction, Inc. of Concord. Landscape design by Leigh Starer of Franconia is inspired by the Olmsted-designed formal garden on the site, with tiered stone walls forming a hillside amphitheater. The goal is to complete work on the building and grounds by next summer.

The Carriage Barn renovation is the next step in an incremental transformation at The Rocks, precipitated by the loss of historic buildings to a 2019 fire. The hillside amphitheater made with the granite foundation stones of the lost buildings now occupies the site of the fire, offering spectacular White Mountain views, including the Pliny, Kilkenny, and Presidential ranges. The amphitheater will be used as an outdoor classroom, event space, and picnic area. 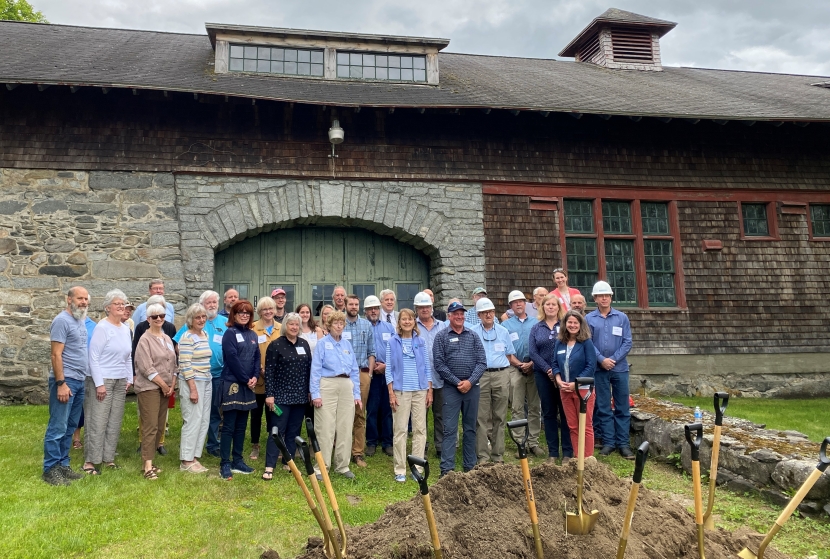 Of the nearly 50 people gathered to celebrate the beginning of the Carriage Barn renovation were representatives of Samyn d’Elia Architects, of Holderness, Milestone Construction, of Concord, and landscape architect Leigh Starer, of Franconia.
The Forest Society has also located the Christmas Tree Farm operations at “The Red House” complex at 686 Main Street, down the hill from the stone barn, separating farm operations from public use areas. More than 30,000 trees grow in the fields at The Rocks.

In addition to creating a welcoming natural and cultural history destination, the Forest Society’s investment at The Rocks will allow professional conservation staff serving the North Country to be based at The Rocks. The Forest Society owns 17 forest reservations in the North Country and is in the process of purchasing 3,750 acres in Shelburne, known as the Mahoosuc Highlands. 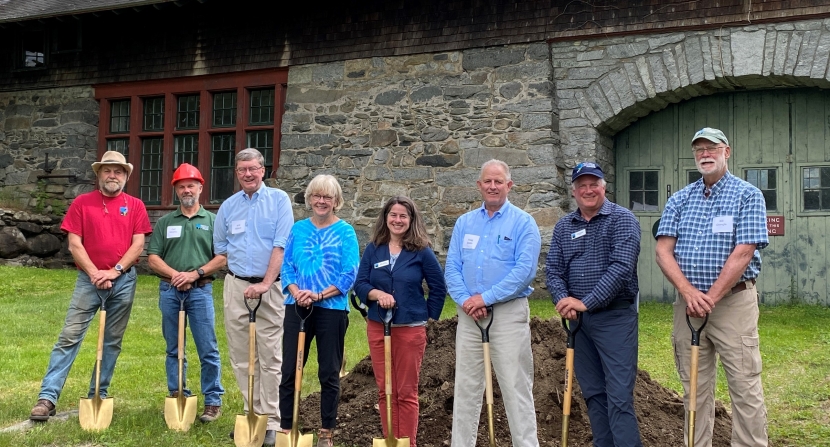 The Rocks was assembled by the Glessner Family of Chicago as a working farm and summer retreat in the late 19th and early 20th centuries, which employed more than 100 people at its peak. With period architectural style and an Olmsted-designed formal garden, it continues to display unique elements of the old White Mountain estate. The Rocks was also the home of forensic crime investigation pioneer Frances Glessner Lee. Glessner family descendants donated The Rocks to the Forest Society in 1978, and since then it has been operated as a Christmas Tree Farm, working forest, and a conservation program and education center.