Northern Pass at the SEC 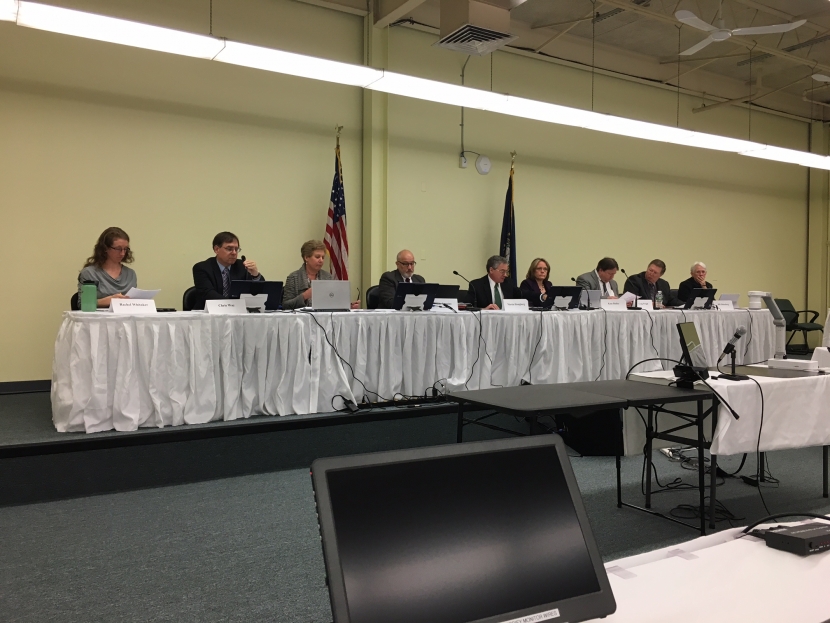 During the SEC deliberations the subcommittee members weighed about where each of them stood regarding one of the key standards the applicant must prove. The statute says “The site and facility will not unduly interfere with the orderly development of the region…”

The applicant has the “burden of proof” that the proposed project won’t unduly interfere.

All seven subcommittee members concluded individually that Northern Pass did not meet the burden of proof based on the record. Noting that this mean the project could not and would not be granted a certificate, the subcommittee ultimately voted to end deliberations. When it came to a vote, the subcommittee voted 7-0 to deny Northern Pass a Certificate based on the applicants failure to meet the burden of proof on the Orderly Development standard.

Read the Forest Society's statement about the SEC decision.

Northern Pass, a project proposed by Eversource in partnership with Hydro-Quebec, would have seen 192 miles of transmission line built, with 132 miles overhead on more than 1,000 towers and 60 miles buried. The project would need a federal Presidential Permit, a Special Use Permit from the White Mountain National Forest, and a permit from the SEC. The SEC is the New Hampshire statewide siting authority for energy infrastructure projects.

In order to issue a siting permit to Northern Pass, the SEC must find that it meets four standards as outlined by NH RSA 162-H:16:

"In order to issue a certificate, the committee shall find that:
(a) The applicant has adequate financial, technical, and managerial capability to assure construction and operation of the facility in continuing compliance with the terms and conditions of the certificate.
(b) The site and facility will not unduly interfere with the orderly development of the region with due consideration having been given to the views of municipal and regional planning commissions and municipal governing bodies.
(c) The site and facility will not have an unreasonable adverse effect on aesthetics, historic sites, air and water quality, the natural environment, and public health and safety.
(d) [Repealed.]
(e) Issuance of a certificate will serve the public interest. "

Also involved was the Counsel for the Public, who works for the New Hampshire Attorney General, and who represents the interests of the public.  Initially that was Peter Roth, hired his own attorneys to assist him, and they  hired their own experts. When Roth left the position, he was replaced by Chris Aslin.

This is the second Motion for Rehearing filed by Eversource asking the NH Site Evaluation Committee to " reconsider and vacate the Order, complete deliberations on all of the criteria in RSA 162-H:16, IV (2017) and grant the Certificate".

The SEC will meet on Monday, March 12, 2018 at 11 a.m. to consider Eversource's Motion for Rehearing in the Northern Pass docket.

This is a Motion for Rehearing filed by Eversource asking the New Hampshire Site Evaluation Committee to vacate its decision to deny a Certificate of Site and Facility to the proposed Northern Pass transmission line project. It was filed Feb. 28, 2018.