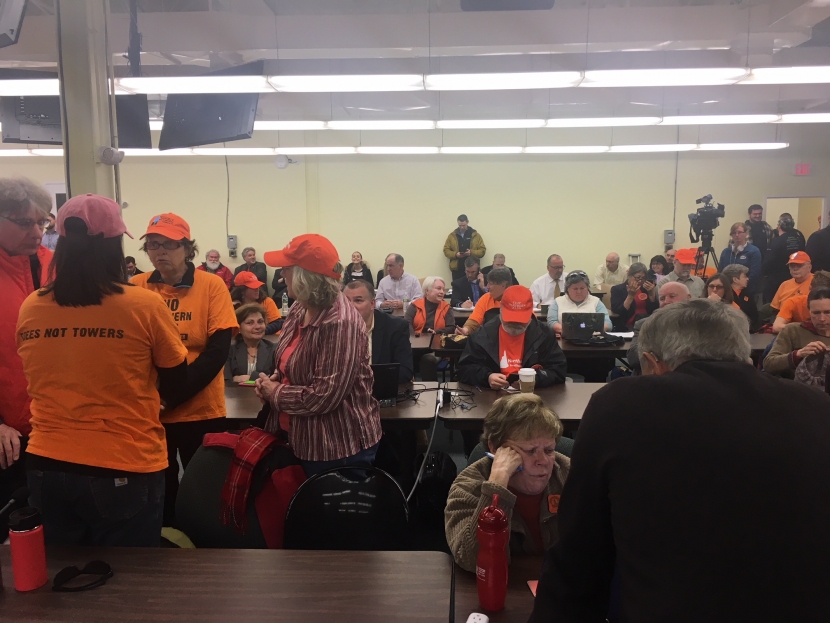 Once again Northern Pass did not get what it was hoping for from the New Hampshire Site Evaluation Committee (SEC). Asked by Eversource in a Motion for Rehearing to vacate its Feb. 1 decision to deny a Certificate of Site and Facility and then to take up deliberations anew, the SEC instead decided to take up the Motion only after the SEC issues its written decision to deny Northern Pass, which may not be until the end of March.

"I don't think we should vacate our oral decision," said SEC member Patricia Wethersby during discussion. "I'm pretty confident that decision was well-reasoned, lawful, and made in accordance with administrative rules."

The SEC subcommittee discussed whether or not to re-open deliberations on Northern Pass, as requested by Eversource. But after a brief discussion, no member of the subcommitee put forward a motion to re-open deliberations. "I don't think we're obligated to advise someone on things that are hypothetical," said SEC Chair Martin Honigberg, in response to the idea that conducting further deliberations might be "instructive" to the applicant without changing the ultimate decision to deny.

Eversource filed its Motion for Rehearing on Feb 28, which then required the SEC to respond by March 12. The SEC had three options, as explained by SEC attorney Michael Iacopino: 1. to grant the Motion for Rehearing; 2. To deny the Motion; or 3. To suspend its oral decision with conditions. They opted for the latter, voting 5-0 (two subcommitee members were absent) to suspend teh Feb. 1 oral decision.

According to Iacopino, the action taken by the SEC has "little practical effect in the short term". Rather it is a means to buy time while meeting the 10-day response requirement for a Motion for Rehearing. Intervenors, and the Counsel for the Public, believed the applicant's Motion for Rehearing was premature, as the final written decision to deny the Northern Pass project had not yet been issued.

But the March 12 vote may well be the final nail in the coffin for Eversource's hope to negotiate a contract with the state of Massachusetts for the power that would have been delivered over the Northern Pass transmission line. Massachusetts, which originally chose to negotiate with Northern Pass for the so-called "Mass RFP", subsequently began negotiations with a competing transmission project in Maine proposed by CMP/Avangrid. But Mass had left the door theoretically open to Eversource until March 27 to get permitting for Northern Pass in order. That does not seem remotely possible at this point, even if the SEC doesn't wait until the end of March to issue it's written decision.

Once the written decision has been published, parties would have up to 30 days to file a Motion for Rehearing based on that decision. Some are likely to dispute whether Eversource can file a second Motion for Rehearing. Even if they do and then file that motion quickly, intervenors have 10 days to file objections. And then the SEC has additional time to read and consider the motion and objections. The earliest the SEC is likely to reconvene to consider a Motion for Rehearing is mid-April. After today's session, Iacopino told reporters that he thought filing deadlines would push further consideration of a motion for rehearing into May 2018.