Forest Society Honors Tanya Tellman as Conservationist of the Year 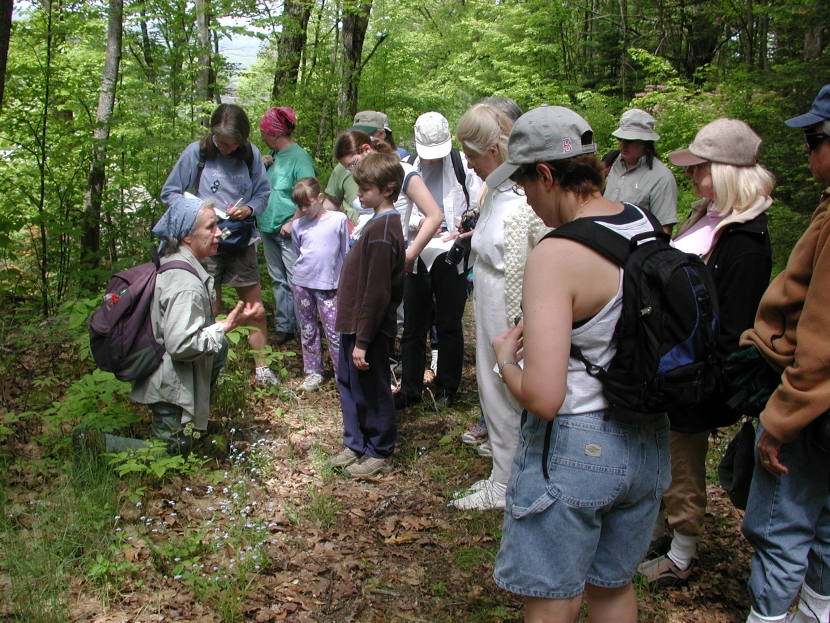 Volunteer Tanya Tellman leads a tour on Wildflower Day In Bethlehem in 2004.

CONCORD, N.H. (Oct. 9, 2020)— The Society for the Protection of New Hampshire Forests presents its Conservationist of the Year Award at its Annual Meeting, held every fall. This prestigious award honors people whose work to promote and achieve conservation is exemplary; people whose actions have made a difference not just in their own backyards, but also have advanced the protection and stewardship of land statewide. At the Forest Society’s 119th Annual Meeting held virtually in September, Tanya Tellman, longtime resident of Whitefield, was honored as the Conservationist of the Year for her 30 years of volunteering at The Rocks and Bretzfelder Memorial Park, and for a lifetime of exemplary stewardship alongside her late husband Dave.

Tellman attributes her lifelong love of nature to the influence of her mother and her mother’s cousins, along with visits to a family camp on Squam Lake, during her childhood in Connecticut. Her mother’s first cousin, John Dodge,  worked for NH Fish & Game and took her to explore many of New Hampshire’s premiere outdoor places. In fifth grade, Dodge introduced her to Les Clark, the Forest Society’s former education director. Tellman’s early childhood experiences led her to enroll in Michigan State University as the only female student in the fish and game department. She graduated in 1961 with a degree in Conservation Education.

In November 1969, Tellman and her husband, Dave, purchased 135 acres in Whitefield, so they would have a place to camp with their two sons. Summers were spent on the property with no running water or electricity, just the outdoors surrounding them. Tellman joined the Forest Society in 1970 and was also recognized this year for 50 years of membership. After her husband’s retirement from military service in 1990, the couple moved to Whitefield. Soon, Tellman began volunteering at The Rocks in Bethlehem, and after taking the docent training course became a volunteer for all seasons, serving on committees, leading the spring Wildflower Walk, hosting wagon rides at Christmas, and serving on, and leading, the Bretzfelder  Memorial Park Committee.

“Tanya’s lifetime of commitment to conservation and good forest stewardship makes her particularly deserving of this award,” said Jack Savage, president for the Society for the Protection of New Hampshire Forests. “In word, deed and generosity she has shown others how to be a conservationist.”

Tellman has brought her love for the outdoors well beyond her own backyard. The couple grew their original 135-acre camp into more than 1,000 acres of conserved farm and forest land. The couple also purchased and conserved more than 1,500 acres in Columbia and around Lyme Pond. In fact, Tellman loved the variety of wildflowers around Lyme Pond so much, the couple went to work on conserving every parcel around the pond over several years. In 2007, a parcel of land owned by the Tellmans in Bethlehem was named Tree Farm of the Year.

Tellman developed a particular affinity for Bretzfelder Memorial Park, a 77-acre community park and natural history resource owned by the Forest Society in Bethlehem  She considered Bretzfelder her pet-project, having chaired the Bretzfelder Memorial Park Committee for numerous years and worked in collaboration with the Town of Bethlehem to present the Bretzfelder Park Family Educational Series. Tellman also brought her knowledge to local schools, leading students on wildflower walks and outdoor explorations, and was a presenter on numerous topics for NH Fish & Game.

“Tanya is one of the most dedicated and knowledgeable people I have ever known,” states Nigel Manley, director of the North Country Property for the Forest Society. “In fact, I have never met someone as passionate about wildflowers as Tanya. She is an expert in geology and wildflowers, the changing seasons and natural history, and she has shared her knowledge and passion with students young and old. If you ever get a chance to take a walk with her, I highly recommend it.”

Past Forest Society Conservationists of the Year include Martha Chandler of Laconia, and U.S. Sen. Judd Gregg.