Fire Destroys Buildings at the Rocks in Bethlehem 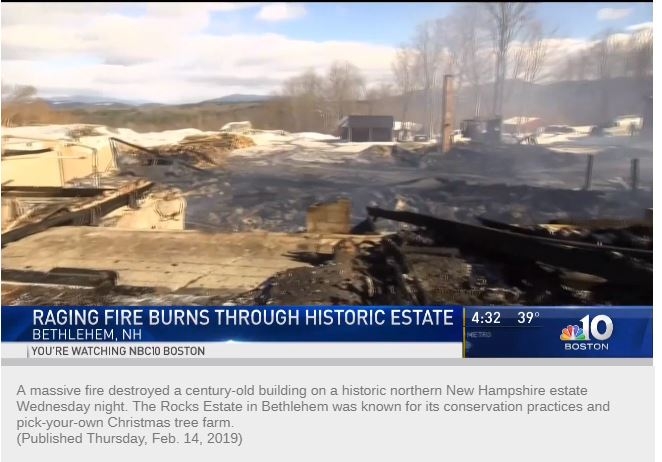 A fire has destroyed a century-old building on a historic northern New Hampshire estate known for its conservation practices and pick-your-own Christmas tree farm.

Firefighters say the fire at The Rocks Estate in Bethlehem broke out at about 6 p.m. Wednesday.

The video of a raging fire was breathtaking and the loss, for some, is heartbreaking.

Anderson said the flames quickly consumed the main building on the historic estate.

“As I crested the hill, I could see heavy fire showing from that distance so I knew we were in trouble,” he said.

Chicago millionaire John Glessner built the estate as a summer home back in 1906.

It’s now on the National Register of Historic Places.

“We lost something, and the state lost something,” said Jack Savage with the Society for the Protection of New Hampshire Forests, which has owned the estate since the 1970s.

Savage said at Christmas time, The Rocks Estate draws thousands of New England families who want to pick out the perfect tree from Bethlehem.

“This is where people come and pay for their trees, and have their hot chocolate, and a horse and wagon ride,” Savage said smiling.

The smoldering rubble is all that’s left of what also used to be a popular wedding venue and the North Country Conservation and Education Center.

Savage said people all over the world consider The Rocks Estate a prized possession.

“There was one gentleman who was in tears looking at it, thinking of his experience in this very building,” Savage said.

But Savage said they’ll rebuild and always remember – there’s one thing that can never be lost.

“This is one of the state’s greatest views of the Presidential Range and that’s still there,” Savage said.

There was also an apartment in the four-story barn that burned.

The tenant that lived there was able to make it out safely and no one else was hurt.

Anderson said they’re still trying to determine an exact cause, but they don’t believe the fire is suspicious.