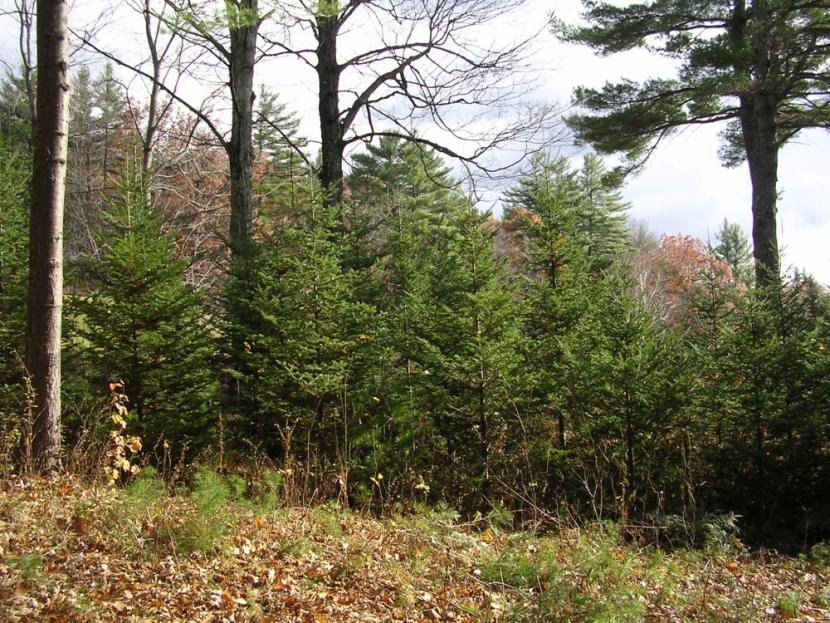 The balsams were soon left to languish by themselves, an unintentional forest of forgotten firs. Photo Dave Anderson

"May something go always unharvested! May much stay out of our stated plan,
Apples or something forgotten and left, So smelling their sweetness would be no theft."

My Christmas tree plantation is now a faded field of dreams. Five hundred balsams, row upon row, now rise to fifteen feet or more in height, overgrown and unshorn, useless and abandoned.

I remember well that passion for planting on springtime weekends. I was young, my back was strong and my children were mere toddlers. We measured-out rows and rocked the bright red planting bar into the soil. We slid bare-root seedlings into the cool earth and closed each slit and watered-them-in. The miniature forest grew well in the old pasture along a stonewall above a brook in full sun. We planted more trees each spring in gaps. I learned to split-feed fertilizer and to shear to shape the young trees. With youthful enthusiasm and naivete I confidently calculated a future profit.

Like any crop, growing season tasks – watering, feeding, shearing, weeding and thinning – require your attention in summer. But Christmas in July doesn't work. Balsams are not as sweet or immediate as ripe peaches, blueberries, melons and corn. It was too hot to be shearing five hundred balsams on summer weekends when a cold swim beckoned after mowing. 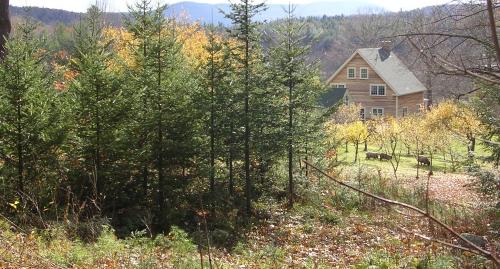 The Christmas trees grew wild, untended beyond the fields, orchard and gardens nearer the house.

At Christmastime, I watched local growers struggle to expand their "cut your own tree" business. Pre-cutting trees is too risky without steady buyer traffic. The Christmas tree business is a zero-sum game in rural areas with limited local markets. The marketing aspect proved to be as discouraging as the shearing. The balsams were soon left to languish by themselves, an unintentional forest of forgotten firs.

In autumn, fallen yellow, orange and red maple leaves adorn the trees like colorful natural ornaments. And after a first measurable snowfall in December, I invariably wander through those trees. Their dense foliage is fragrant and luminous. A lacework of mice, squirrel, snowshoe hare and deer tracks thread the maze of balsams. Dried ferns and moss are woven into bird nests perched on limbs and hidden deep against the trunks. Low boughs create sheltered ruffed grouse coverts, a pantry of sweet, dry weed seeds to eat. Fir cone scales are piled in middens left by red squirrels. Winged maple seeds and acorns cached like marbles are stashed by mice, squirrels and blue jays. The balsams bustle with as much activity in December as any city tree sales lot. My failure as a producer of merchantable Christmas trees has virtues all its own. In abandoning my trees, I've discovered they're worth as much right where they are!

Another failed New Hampshire farmer once pondered his unintentional forest of balsams. When a stranger from the city came "to look for something it had left behind and could not do without and keep its Christmas," poet Robert Frost penned a poem, actually written as a Christmas letter to friends, entitled "Christmas Trees." The poem follows his more famous poem "The Road Not Taken" in Mountain Interval (1916). As such, "Christmas Trees" is often "the poem not remembered." Frost recounts how he was asked by the stranger to sell a thousand balsam firs from the pasture behind his house.

" 'A thousand Christmas trees! – at what apiece?'
He felt some need of softening that to me:
'A thousand trees would come to thirty dollars.'

… thirty dollars seemed so small beside
The extent of pasture I should strip, three cents
(For that was all they figured out apiece) –
Three cents so small beside the dollar friends
I should be writing to within the hour
Would pay in cities for good trees like those,

…Christmas trees I didn't know I had!
Worth three cents more to give away than sell,
As may be shown by a simple calculation.
Too bad I couldn't lay one in a letter.
I can't help wishing I could send you one
In wishing you herewith a Merry Christmas."

My overgrown balsams are indeed well worth their market price for the scenery and the wildlife they bring to that former pasture behind the house.

And a Merry Christmas to you, Robert Frost!