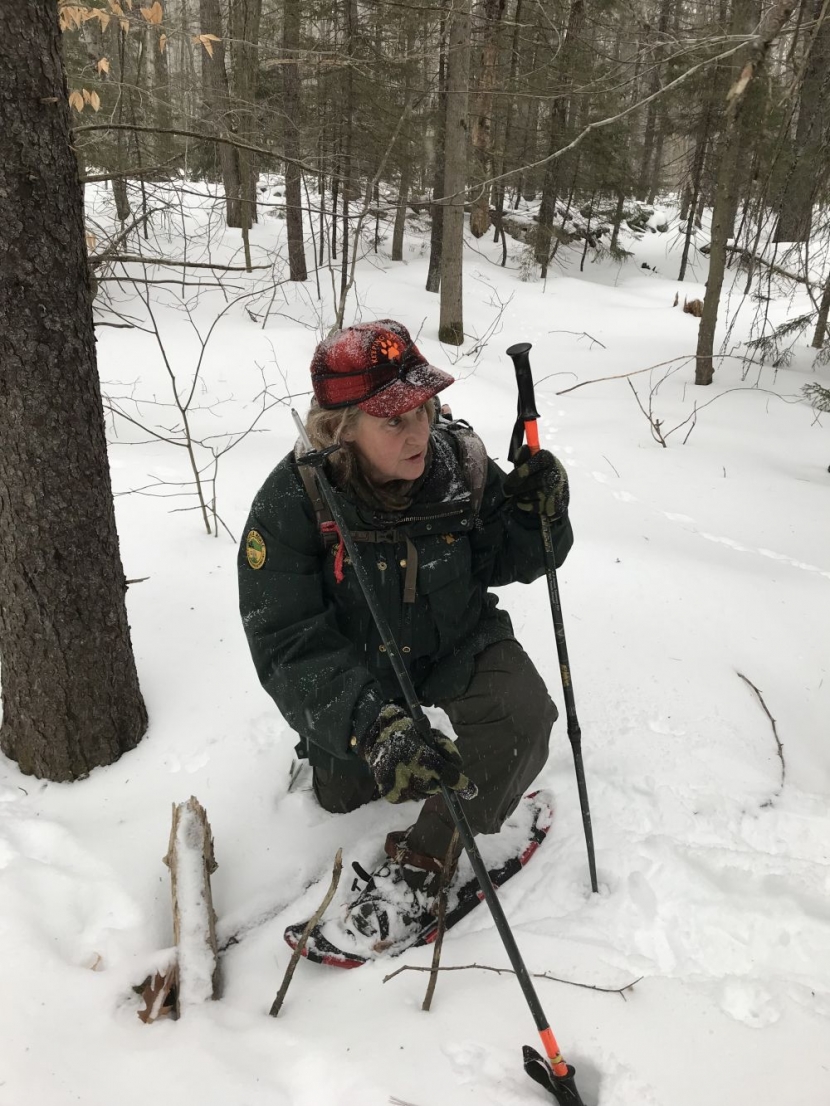 In November and December, we are offered a rare glimpse into the lives of nocturnal animals. The conditions this time of year are perfect for reading tracks before the snowpack becomes too deep and full of drifts. A fresh snowfall of an inch or two over a solid crust resets the “whiteboard,” the equivalent of shaking an Etch A Sketch.

With some patience and a keen eye, trackers can trace nightly movements of animals unlikely to be seen by day: weasels, fishers, foxes, coyotes, bobcats, and deer. The most common tracks you’ll find are diurnal species that visit backyard birdfeeders: gray squirrels, red squirrels, and wild turkeys. These hungry critters tend to retrace their steps in similar locations, for example, a gray squirrel’s tracks from tree trunk to birdfeeder.

Tracking is as much of an art as it is science. Students poring over guidebooks can be overwhelmed with track measurements of stride (length of the track) and straddle (width of the track). For newbies, it helps to learn the four basic groups of animals that register distinctive tracks:

In addition to recurring track patterns, it’s important to consider the habitat you’re tracking in, such as wetlands, dense conifers, and hardwood forests. The availability of food and water and the creation of territorial scent marks and other mating behaviors influence wildlife movements in winter, too.

Identifying tracks often requires the process of elimination. Start by determining which animals are inactive or hibernating in the winter. Think bears, woodchucks, and jumping mice. Then rule out animals that don’t live in New England, such as badgers, wolverines, caribou, and wolves.

Morse leads indoor presentations, youth programs, and field workshops for Keeping Track, a nonprofit she founded 25 years ago. Equal parts forester, biologist, conservation planner, wildlands advocate, and philosopher, Morse teaches thousands of rookie trackers and budding naturalists the art of tracking. “Half of wildlife tracking is knowing where to look. The other half is looking,” she says.  Morse also advocates for a better understanding of landscape-scale conservation planning. “Many people are first attracted to our tracking workshops because they are sucked in to the idea of following animals. They think that is what Keeping Track is all about; but the next thing you know, they are learning more about the plants and finding local game trails the animals need to survive.” For Morse, it’s her passion for a holistic understanding of wildlife habitat needs in the face of a changing landscape in New Hampshire that makes her work worthwhile in the end.

Naturalist Dave Anderson is senior director of education for the Forest Society. To learn more about Morse’s current work and publications, visit keepingtrack.org.

This "Nature's View" column originally appeared in the Winter 2020 issue of Forest Notes: New Hampshire's Conservation Magazine. Join today to start receiving our quarterly, award-winning magazine that will keep you up-to-date on the latest land conservation news and special stories of people and place in New Hampshire.