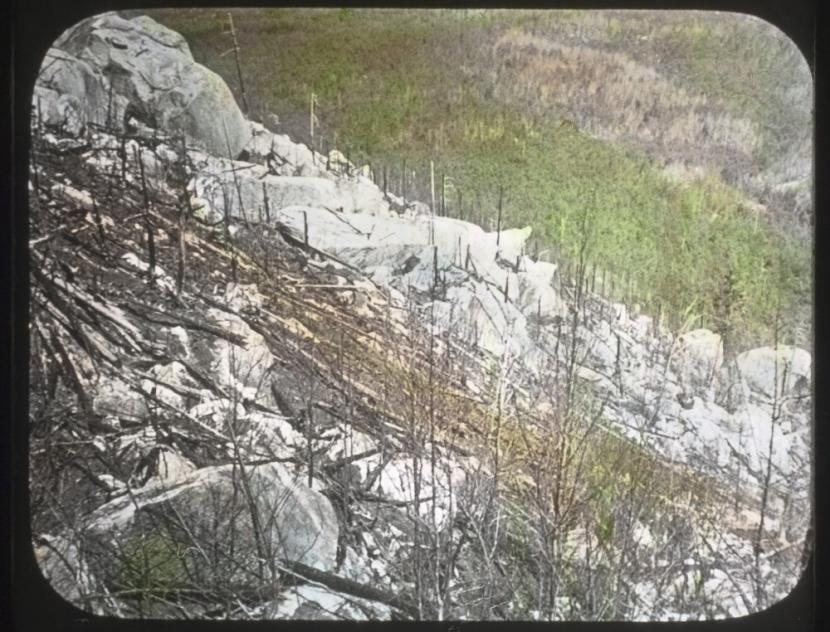 The Zealand Valley fire of 1886 roared up the slopes of Mount Oscar, the Rosebrook Range and the twin Sugarloaf peaks, charring 12,000 acres and consuming two million board feet of sawlogs. 1903 photo courtesy of Milne Special Collections and Archives Department, University of New Hampshire Library, Durham, NH.

Even to those most intimately familiar with the past century of reforestation, the raw resilience of the White Mountains’ forest cover remains miraculous.

The Sugarloaf Campgrounds are still awakening in June. A red fox emerges from dense red spruce and balsam fir forest on the banks of the Zealand River to trot along a sunlit loop road, checking campsites for red squirrels and chipmunks who regularly panhandle for food scraps. Overhead, colorfully-patterned warblers lisp amid pastel green hardwood leaves: pin cherry, aspen, red maple and white birch. The tropical migrants so recently returned from the Caribbean or Central and South America defend breeding territories in what is, to all outward appearances, a northern jungle. 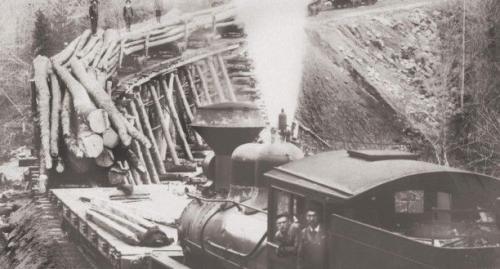 Sparks from passing locomotives like this one often landed in slash left from the previous winter’s cutting, starting devastating fires. Photo courtesy of Plymouth State University, Protecting the Forests: The Weeks Act of 1911 exhibit.

Hidden nearby in the forest are remnants of the Zealand Village. Crumbling cement and brick kilns are clearly positioned between parallel railroad grades. Sidings facilitated loading hardwood bolts and unloading cooked charcoal. Downstream, rails converged at the log pond that fed the sawmill on the north bank of the Ammonoosuc River. Steel rails had formerly connected a turn table, engine house, repair shop, and snowplow shed.

Fires devastated the late nineteenth century logging operations along the Zealand River. According to Bill Gove, author of J.E. Henry’s Logging Railroads, a fire in July 1886 started when sparks from a Baldwin locomotive landed in sun-dried spruce slash left from the previous winter’s cutting. The fire burned seven miles up the Zealand Valley, consuming three logging camps where summer crews abandoned livestock and fled for their lives. A log-scaling crew cut-off from escape and, surrounded by fire, sought refuge in a brook. The locomotive had been climbing uphill, facing backwards while pushing empty cars to retrieve loaded logs cars at a rail siding. When fire broke out in the valley below, the crew retreated hastily, “passing over the ‘dry trestle’ shortly before it collapsed in flames.”

The 1886 fire charred 12,000 acres, including $50,000 dollars worth of standing timber in 1886 dollars, and consumed two million board feet of sawlogs resting on railroad skidways or cut and piled on landings in the woods. The fire roared up the slopes and crested the ridge of the Sugarloaf peaks, Mount Oscar, and the Rosebrook Range. The fire burned hot enough to consume the soil and leave behind bare, charred rock of the steep cliffs and summit slopes.

Fire again struck the Zealand Valley in May 1897. This time, the sawmill and village itself burned when a loose pulley in the mill allegedly set a pile of shavings ablaze. In addition to the loss of the mill, sawlogs, and two million board feet of sawn lumber, company housing, a store, and outbuildings were also lost. 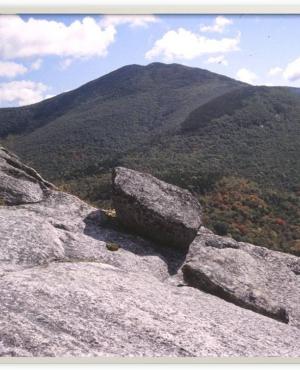 Today the once-charred granite ledges of Middle Sugarloaf provide sweeping views to South Sugarloaf and Mt. Hale at the mouth of the Zealand Valley. Photo by Dave Govatski.

In Colonial New Hampshire, these mountains were a howling wilderness clad in dark, impenetrable forests of old growth spruce and northern hardwoods. For modern hikers, the changes wrought during the most recent century make it easier to now imagine the time before the rise and fall of J.E. Henry’s logging empire, before the construction of his Zealand Valley Railroad and the devastation of raging fires.

The once-charred granite ledges of Middle Sugarloaf provide sweeping views to South Sugarloaf and Mt. Hale at the mouth of the Zealand Valley. Mount Oscar and the Rosebrook Range rise in the east below the stunning snow-clad Presidential Range.

As rightfully as any other place in the United States, Zealand Valley can be considered “ground zero” for the launch of the campaign that culminated in the establishment of the White Mountain National Forest and every other eastern national forest.

The forests of the White Mountains and the entire Appalachian Region have regenerated naturally. Soils are rebuilt with each successive year’s autumn leaf fall. The seemingly pristine wilderness is again cloaked in a deep green mantle as young trees sprout from the ashes of the Zealand Valley where forests preside quietly over rusty remnants. While change and resilience are the natural order of things, human restraint and enlightened selfinterest often seem less so.

Today it is not inconceivable that this same valley will be logged again—albeit more “wisely” than a century ago. The entire concept of sustainable forestry in the second growth of eastern national forests provides an excellent opportunity to demonstrate how political action to affect forest conservation coupled with restraint can overcome a history of human exploitation.

Time built resilience into our forests to allow them to recover from natural disturbances. In the wake of the era of ten thousand-acre clear-cuts and subsequent fires—disturbances on a scale unprecedented since the last glacier—time also wrought cultural changes. The return of forests to the slopes of the Zealand Valley is a saga of devastation, recovery, and enlightened management. In a nutshell, it’s the story of the eastern national forest system.