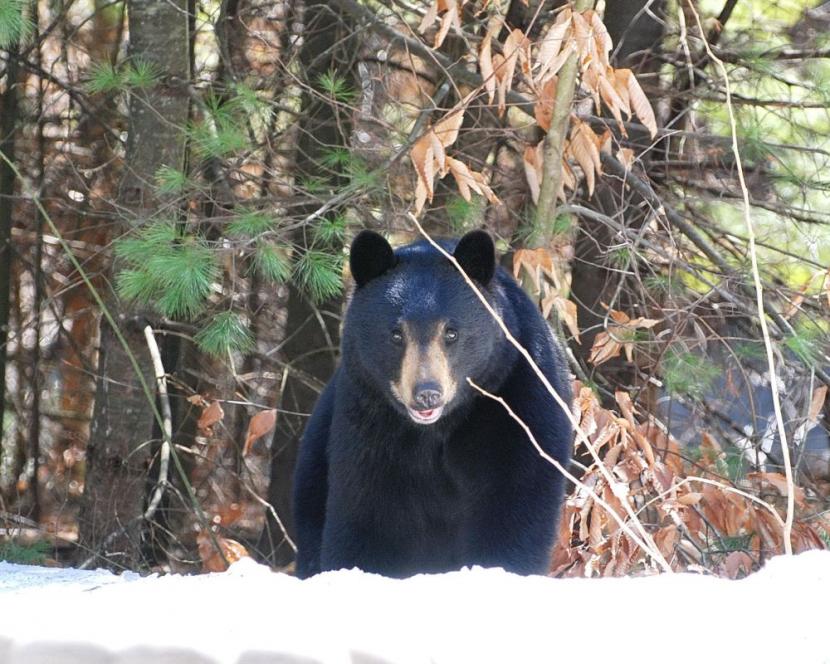 With highly developed sense of smell and limited eyesight, black bears rely on air currents flowing up forested hillsides and over ridges to provide strategic, olfactory views of their surroundings. Photo Sherri Tucker.

On the eve of the first measurable December snowfall, a time of thin ice and rattling beech leaves, I joined three colleagues on a rugged bushwhack to a remote corner of a Society-owned forest reservation. It's not often that the conservation business is as tangible as it was that early winter afternoon.

We'd come to record the precise locations of habitat features using a hand-held GPS receivers. Our goal was to delineate the boundaries of a proposed management area where we would seek to limit human influences, including recreation. The GPS receiver allowed us to plot points on a map to be connected by lines enclosing the proposed special management area. It's a place I regard as a kind of "fortress" for generations of local black bears.

U.S. Forest Service biologists studying black bear behavior have determined that, in autumn, bears feed on beechnuts in forests located on remote hillsides and ridges. They are particularly fond of locations on ridges and saddles connecting hilltops. With their highly developed sense of smell and relatively limited eyesight, black bears rely on air currents flowing up forested hillsides and over ridges to provide strategic, olfactory views of their surroundings. If there's food nearby – beechnuts, acorns, a cornfield, birdfeeders, a barbecue grill or a dumpster – bears smell it. If hunters or hikers with dogs approach a bear feeding area from one side of a ridge, a bear can flee in advance down the opposite side before people are near enough to see or hear them. Topography provides a strategic advantage because air currents are the CNN of the forest, conveying up-to-the-minute news headlines. Topographic "scentscape" is an important consideration that influences bear travel corridors and preferred feeding locations. 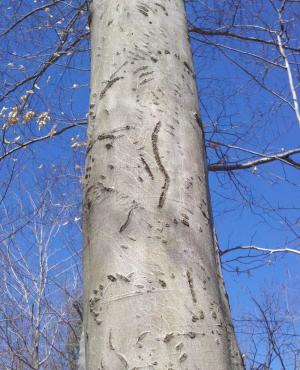 To reach the ridge of large, old, bear-clawed beech trees on Society-owned land requires a steep and arduous bushwhack through dense hardwoods with a thick spruce understory. The January 1998 ice storm shredded parts of the hardwood canopy leaving stressed and dying trees, particularly on the thin soil and steep slopes of that higher hillside elevation. Thickets of sapling striped maple and thorny blackberry vines conceal large, fallen limbs that clutter an understory renewed by sunlight in the wake of the ice storm. The beech forest on the ridge is not an easy place to access. That's the whole point! It's best for the bears to keep it that way.

The fortress is where local black bears gather annually to fatten on cyclical crops of beechnuts and also acorns. Repeated use of the area by bears is evidenced by the scars from bear claws on the beech tree trunks. Clusters of five scars show where a large bear's front paws hugged a tree from the opposite side while the bear was climbing. Long vertical slashes indicate where a bear's claws gouged the smooth, gray bark while sliding down.

While some beech trees with well-developed upper branches seem especially favored for climbing, others are completely unmarked. It's believed some beechnuts are genetically sweeter and more palatable than other beechnuts. So how do black bears on the ground select which trees to climb? Bears can either smell the quality of the ripening beechnuts overhead or they simply "read the label" and climb only those trees with existing claw marks, trees that had proven to yield tasty nuts in the past. 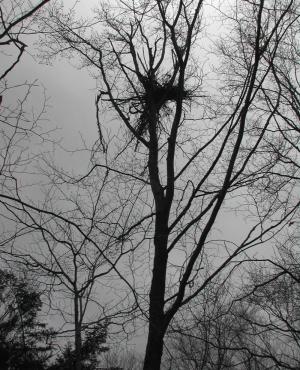 Our forest reservations are managed for multiple uses, including recreation. The bear fortress is in a region with a good network of local hiking trails. The ridge could provide the opportunity to create a new trail, linking adjacent trails and providing views of the surrounding hills and lakes. Local trail advocates proposed constructing just such a trail through the fortress. But the presence of both people and dogs regularly hiking through the area would diminish the integrity of the feeding area for generations of black bears. Once constructed, it would have been impractical to enforce temporary closure of the trail during the season when the bears are present. A proposed alternative trail located a few hundred yards outside the core 40-acre bear management area would have still introduced a human presence in the remote area.

The best management practice for the location likely prohibits construction of new hiking trails. It might paradoxically include careful logging to selectively release or renew the growth of individual beech trees. The delineation of the proposed special management area will be included in the property-specific forest management plan for the tract. The goal is to ensure the ecological integrity of that beech fortress for future generations of black bears. Long-range conservation planning doesn't get much more tangible than that!