When is a Tree Smarter than a Squirrel? 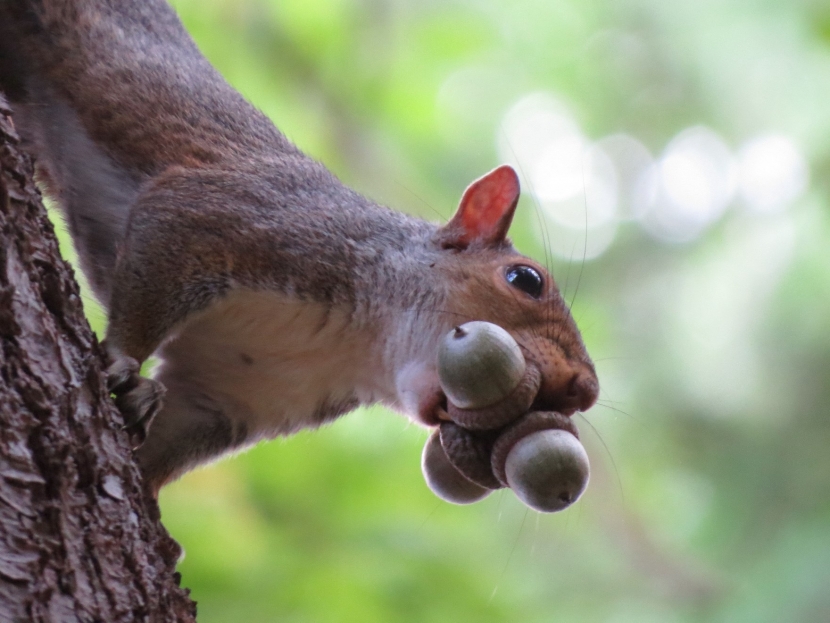 On my way to work, I often stop along a section of dirt road and roll down my window to chat with a retired gentleman who takes a daily walk there.  We exchange observations about the weather, the lack or overabundance of mosquitoes, deer flies or ticks depending on the season, and when the leaves might turn in the fall or how well or poorly the sap might be running in the spring.

The road passes along the Forest Society’s Jennings Forest in New Durham, a wonderful little woodlot that probably welcomes more bears than human visitors. My morning conversationalist is a keen observer of wildlife, and often tells me what he sees along the road.

This week we discussed acorns, and we agreed that the fall 2016 crop is a whopper. We may not have had much rain, lately, but the acorns are raining down.

“The other day I walked along the edge of a field ringed by oaks and needed a hardhat,” he laughed.

We’re not the only ones to make the observation. Across the state people have been astounded by this year’s superabundance of acorns, and at the Forest Society, we’ve been fielding the obvious questions:

2. Does a so-called “mast year” mean that we’re in for a tough winter?

3. Has Donald Trump taken credit for the bumper acorn crop or is this instead a Hillary Clinton/Bernie Sanders plan for free food for squirrels?

The first question has the most interesting answer.

Oak trees, including the Northern Red Oak and White Oak that we come across most commonly in New Hampshire, do periodically produce extra large crops of acorns. And they do so synchronously, meaning all together at the same time, as if they were texting each other—‘ok, everybody, 2016 is the big year, so make sure you’re ready’.

It’s logical to think that weather may influence this behavior—if the conditions are ideal for promoting seed production in a given year, there will be more seeds, right?

But there may be more to it than that. It may well be that the oak trees are outwitting the squirrels, mice, chipmunks, deer and turkeys that seek out acorns for food.

As others have pointed out, acorns are the cheeseburgers of the woods, providing nutrition for a wide variety of wildlife. The more cheeseburgers that are out there, the bigger the bumper crops of critters (there’s some evidence that mast years will yield more twins among deer the following spring).

But while that might be good for the critters, it’s not particularly good for the oak. An acorn eaten is one less potential oak tree.

In response, oak trees vary annual acorn production, thus controlling the population of acorn-munchers. Then, in a year like 2016, the trees put out so many acorns that there aren’t enough critters to eat them all—leading to more oaks. The fancy word for this is “predator satiation.” I call it tree genius!

I’ve watched squirrels outwit my dog when chased, reaching the safety of a tree by rivaling the “route efficiency” of Red Sox centerfielder  Jackie Bradley Jr. But as clever as a squirrel may be, it’s not quite as smart as an oak tree.

So is “masting”, as this phenomenon is sometimes called, a way to predict a long, cold winter? Well, it’s a way, but not a particularly accurate way. Just as weather inputs don’t adequately explain the overproduction of acorns in a mast year, the data doesn’t suggest that those years are accurate predictors of severe winters. You’ll have to keep relying on Aunt Ida’s rheumatism, which I hear has yet to be wrong.

And we’ll let you figure out the answer to question number three. Suffice it to say that in 2016 there are a lot of nuts out there. For more than one reason you might want to keep your hardhat handy.

Jack Savage is the executive editor of Forest Notes: New Hampshire’s Conservation Magazine published by the Society for the Protection of New Hampshire Forests. He can be reached at jsavage@forestsociety.org, or follow him on Twitter @JackatSPNHF.