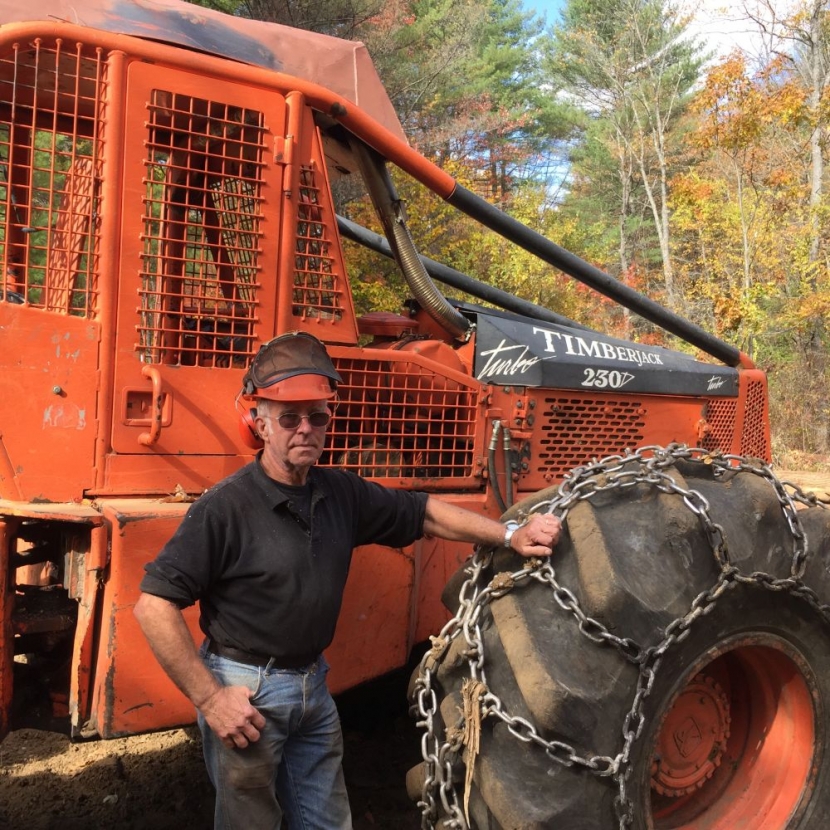 I first met the logger “Brad” back in May during a pre-timber harvest hike with the forester for my neighbor’s woodlot. The pines and hemlocks to be cut were marked with blue paint slashes by the forester, Brooks Weathers.

“I didn’t catch your last name” I said to the elder logger when we stopped to look at the proposed location for a skid trail.  He wheeled around and in a classic gravelly, New Hampshire accent replied: “It’s ‘Butcher!’ Hell of a name for a logger ain’t it?”

I got to know and respect Brad Butcher better as the logging job next door has proceeded. You could set a watch each morning to the sound of gravel crunching under the tires of Butcher’s pickup truck and the diesel engine of the skidder starting-up at 7 a.m. sharp.

Ten minutes of greasing fittings and couplings and Butcher and his skidder would be heading uphill into the woods for some of the most rugged and often dangerous work you can imagine. 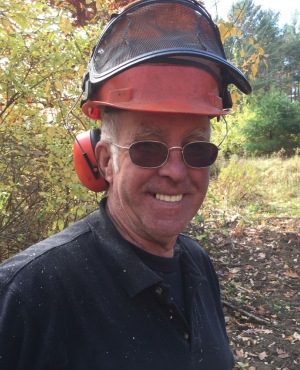 Butcher is now 68 years old. He’s been logging his entire life - or at least since age 14. It’s difficult work even for a young man. Felling and limbing trees using a chainsaw and wedges is referred to as “hand-felling” as opposed to using mechanical, hydraulic harvesting equipment. An older model skidder with rubber tires and steel ring chains is used to winch the long logs to a steel arch at the back of the machine and then drag “hitches” of several logs down narrow, rocky skid trails. It’s labor intensive, skilled work that requires a methodical approach with intense attention to safety and technique.

The timber harvest is relatively small, less than 100,000 board feet. That is maybe 16 truckloads or roughly one load per week: pine, hemlock and mixed hardwood logs cut from a 25-acre woodlot. It’s a perfect job for Butcher’s specialty: traditional hand-felling timber using a chainsaw and a faded orange Timber-Jack, model 230 skidder. Both have twitched a lot of logs over many years.

Butcher confesses he could be hot-headed when he was a younger man. He preferred working alone at an independent enterprise. I asked if he had ever other hired other employees to speed-up production. His earnest reply was “every time I hired someone to work for me, it ended up being worst 15 seconds of my life!” 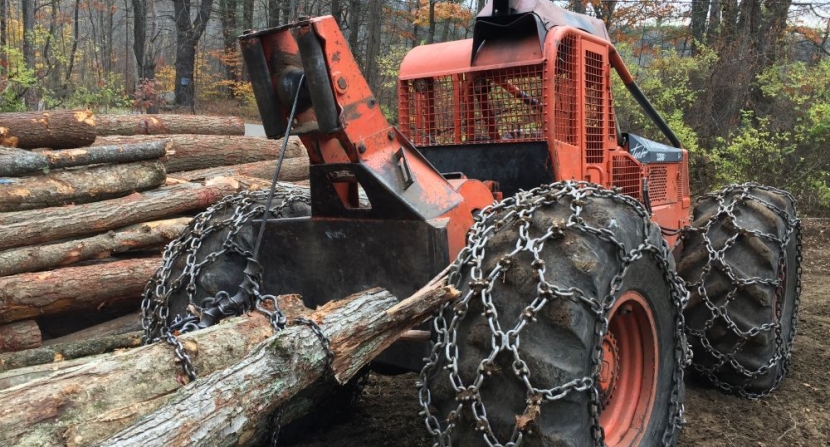 I told Butcher perhaps more people should have the opportunity to meet an old school, grizzly NH logger like him and think about where their daily consumption of both wood and paper products begins. “Most people don’t want to ever meet someone like me!” he replied.

Butcher acknowledges that people use forest products every single day but prefer not to see trees being cut down. “People hate loggers” he says and then adds “but loggers are among the nicest people I know. They would do anything for you.” Butcher describes a cooperative, tight knit community where logging families care for forestlands and care for one another.  “Loggers will give you the shirt off their back if you need it.”

People criticize logging based on its appearance. It’s a rapid change when large machines cut and remove logs and leave a jumble of branches, limbs and non-merchantable wood called “slash” amid cut stumps. Butcher takes extra time to lop the slash low to the ground so it will rot faster and the logging job looks cleaner overall. “A good reputation will carry you along, a bad reputation will beat you home” he says.

On a 90-degree Friday in August, I walked toward the sound of his chainsaw and found Brad near the skidder. He was rigging choker chains to keyhole sliders of the winch cable to create a hitch of gnarly hemlock logs, high up in the back of the lot. He shut off the skidder shimmering in the heat and offered to show me the area he had finished cutting the previous week. I said I’d go look myself. I didn’t want to slow his production or delay the end of his working week. Butcher said “I like to walk my jobs with people. I’m happy to show you. I don’t care if people like it. I do what I do.” 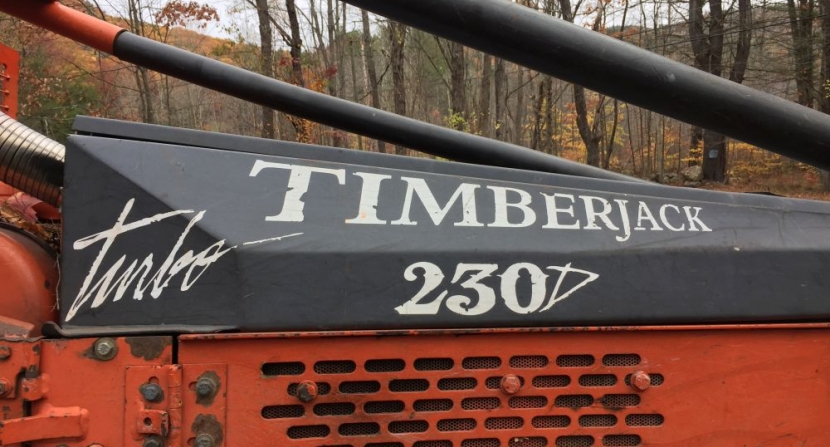 It’s quickly obvious Butcher cares how the woods look after his logging. Designated bumper trees help pivot logs being cable skidded and prevent wounding the bark of remaining, standing trees. Butcher’s work regenerates new seedlings, releases younger trees into sunlight and increases growth rates of residual timber that will comprise the next harvest in 15 years… and hopefully the next harvest after that.

Sustainable, long-term forestry provides periodic revenue to cover carrying costs of land ownership including property taxes. Logging can be the most important tool to help keep forests growing trees instead of parking lots.

Beneath his gruff exterior, Butcher is rightfully proud of a career spent working alone in the woods, against steep odds including fickle wood markets and harsh weather. Loggers work during hot, humid summers and deep snow and bitter cold each winter and endure an annual spring “mud season” layoff that shuts down logging operations statewide in March. Mechanical breakdowns are a certain daily reality. In addition to maintaining the aging skidder, Butcher maintains at least four chainsaws including his best chopping saw for felling trees. I ask if he uses different saws for lopping slash vs bucking whole trees into shorter merchantable lengths after they’re skidded to the landing. Nope, he replies, the other saws are all backups for when something breaks.

Perhaps the most daunting obstacle loggers face is economic headwinds. Small scale logging is low production relative to larger mechanized equipment harvesting whole trees and chipping the slash for biomass energy. Mechanized “cut to length” machinery operators rarely leave the cab while processing wood into logs in the woods and carrying logs (rather than skidding) to a timber landing for trucking off-site. 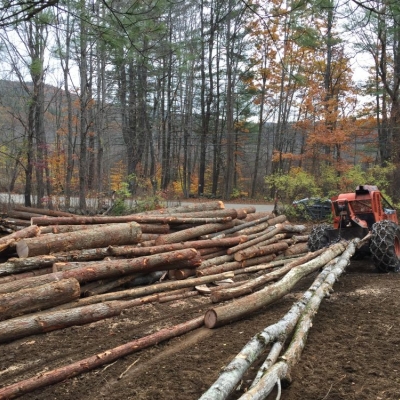 “I guess I’m a dinosaur”

Butcher tells me cable loggers have become a vanishing breed. “I guess I’m a dinosaur” he says.

Brooks Weathers is log yard manager and procurement forester for Durgin and Crowell, a pine sawmill in Springfield NH. Weathers offers cable logging has become a specialty niche, meeting wood markets not every landowner or every tract of land lends itself to.

However, Weathers adds “there’s an overwhelming sense of pride to know you have touched every piece of brush, limb, log and leaf once the job is completed. I think that is why guys like Brad Butcher enjoy the old way of logging. You leave a bit of yourself on every job. Production isn't everything. Small payments and low overhead allow time for discussion, debate and good planning. Whether it's walking a potential job or going over multiple ways to buck up an oak tree. There is rarely a feeling of 'let’s just get this done’.” 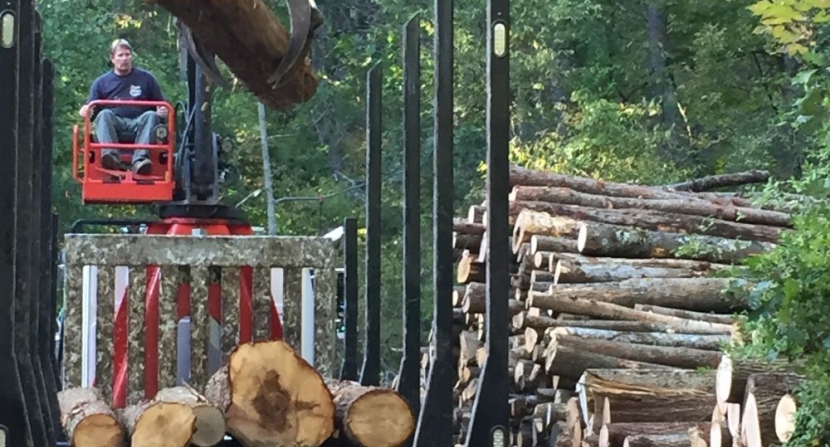 Weathers respects Butcher’s lifelong logging experience. “I’m aware he has forgotten more than I'll ever know about the art of hand-felling. There is never a need to question his way of doing things, it's been proven to be the most efficient yet careful method to achieve the best results.”

Independent log truck driver Todd St.Cyr hauls logs for Butcher. He agrees. “He’s a master logger. He’ll never call for a truck when he has less than a full load. He never leaves a landing until a truck is fully loaded. He’s the ultimate family man. He takes good care of the people who take care of him.”

I ask St.Cyr about Butcher’s reputation to never suffer fools. “Oh there are probably a few good stories, but you can’t really print those in a family friendly newspaper!”

For his part, Butcher sums up his life’s work saying “logging has never been a get-rich-quick kind of career. It’s chicken one week, and then feathers the next.” I ask how much longer he expects to be working alone in the woods in a rugged occupation.

He shrugs and dismisses the question with “I guess we’ll find out.”