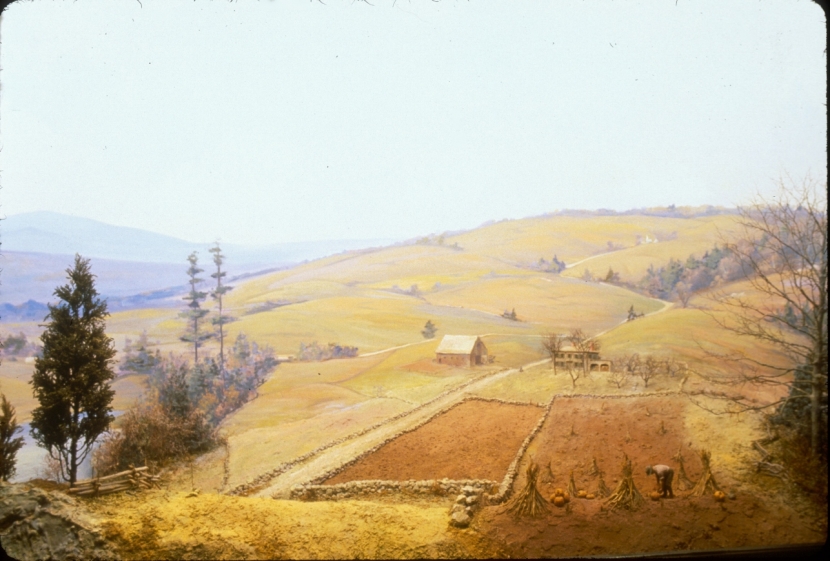 This diorama shows what New Hampshire looked like during its sheep-farming days. Image courtesy Harvard Forest.

Two centuries ago, New England forests were in the midst of significant change. European settlement up to that point had already led to widespread deforestation, for heat, timber export, homebuilding and agricultural clearing. But when William Jarvis introduced the Merino sheep from Spain around 1811, he launched a sheep boom. By 1840, there were an estimated 4 million sheep in New England (more sheep than people)—the care and feeding of which fueled even more extensive forest clearing.

It’s estimated that by 1850, as little as 25 percent of New England was still forested.

But with the opening of the West, New England farmers moved away. Cleared farms, no longer cultivated nor grazed, slowly began to revert to forest. For more than a century, New England forests recovered.

Today that trend has reversed. According to an updated report called "Wildlands and Woodlands" issued recently by Harvard Forest, New England has been losing an average of 24,000 acres of forest a year. Much of this loss is what Harvard Forest’s David Foster refers to as “hard conversion”—commercial or residential development that is more or less permanent. Unlike sheep grazing lands, a new convenience store or housing subdivision will not be reverting to forest any time soon.

Given the substantial ecological and economic benefits of forestland—and the increasing realization that it’s a finite resource—this might seem alarming. Like a Rock-Paper-Scissors game, Development Sprawl beats Intact Forest every time.

But there is good news. Even with the development booms of the last few decades, New England is 80 percent forested today. Add in farmland, and 88 percent of New England is arguably growing trees, crops or livestock. Reports like "Wildlands and Woodlands" provide important perspective on such resources. As Foster pointed out at the public release last month, even with a population of 15 million, New England is one of the most heavily forested parts of the United States. As such, the report maintains, our forests represent a globally important resource.

Author/activist Terry Tempest Williams was also on hand for the release of the report, bringing her unabashed western perspective (she’s from Utah) to the discussion. In her view, the American West is not just on fire, but suffering overall from ecological devastation. New England gives her hope, she said, precisely because of the region’s recovery from the deforestation of the 18th and 19th centuries.

But Wildlands and Woodlands is more than a status report, it’s really a vision, not unlike the Forest Society’s New Hampshire Everlasting, that calls for action. "Wildlands to Woodlands" urges conservation of 70 percent of the 30 million acres of existing forest cover in the region.

New England has conserved about 26 percent of forestland thus far. (Approximately 30 percent of New Hampshire’s 5.9 million acres are conserved, much of which is the White Mountain National Forest.) Achieving the Wildlands and Woodlands goal by 2060 would require tripling the pace of conservation, according to the report.

Is that doable? Is it desirable? Is it economically sustainable? Will regional and global wood markets continue to help keep forests as forests, conserved or not? Initiatives like Wildlands and Woodlands are put out there to engender those conversations. The report notes the recent decline in federal and state funds available for land conservation, and calls for initiatives to reverse that trend.

Importantly, it also calls for smarter growth. Efficient use and re-use of developable land can help meet demand for growth and reduce the pace of farm and forest loss. Ideally, conservation and development need not be in conflict.

The real goal is not necessarily about acres conserved but about making sure we have the ecological and economic benefits that our globally important forestlands and productive farms provide. In the 19th century, during the sheep boom, it would have been difficult to measure the impact of farmer after farmer clearing his forestland for sheep.

Today we have far better tools to measure how our actions affect the natural resources on which we rely. And that then gives us choices—hard though they may be-- in how to respond.

To read the report, visit http://wildlandsandwoodlands.org/. You can watch a youtube video introducing the Wildlands and Woodlands report at www.youtube.com/watch?v=dKFuExOg7yk

Jack Savage is the executive editor of Forest Notes, the quarterly publication of the Society for the Protection of New Hampshire Forests. He can be contacted via email at jsavage@forestsociety.org, or follow him on twitter @JackatSPNHF.