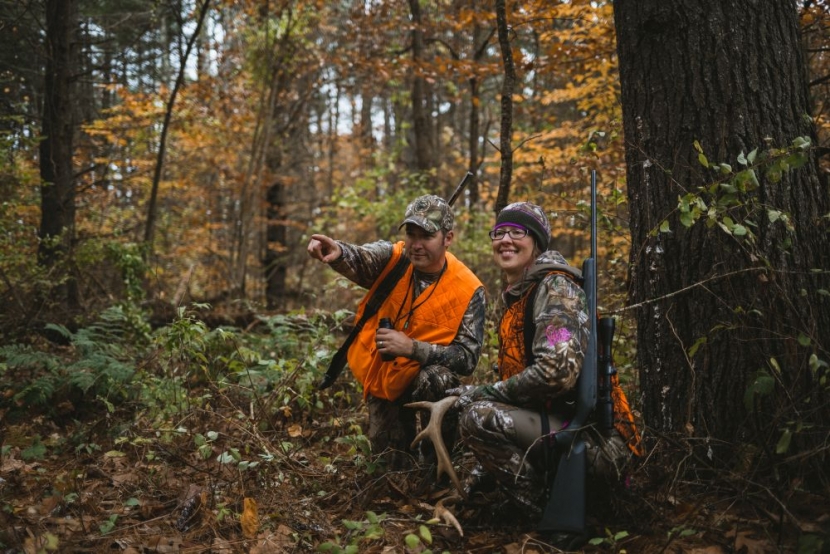 Wear blaze orange clothing – a vest, hat or bandanna easily distinguished from any other color in the woods. (Photo: Courtesy of NH Fish & Game)

Fall foliage season ends abruptly when the brightest leaves fade on the forest floor. Devoid of color and warmth, many hikers leave the spare beauty of the late autumn woods to hunters. According to the NH Fish and Game Department, white-tailed deer are the State’s most popular game animal with an estimated population over 100,000 deer statewide. Archery season started September 15 and continues into December. This past Wednesday began the busy rifle season for deer, following the 11-day muzzleloader season.

I’ve heard non-hunters grumble “we can’t go in the woods during hunting seasons.” Some resent sharing their favorite woods and trails with people wearing camouflage and blaze orange clothing while carrying compound bows, muzzle-loaders or rifles.

The presence of hunters can offend or even frighten some hikers unaccustomed to hunting activity.

How safe is it to be in the woods during hunting season?

Comparative risk statistics for hunting accidents involving non-hunters don’t necessarily align with fears regarding the risks of hiking during hunting seasons. According to NHFG records, there have been a total of two incidents in the past thirty years involving non-hunters. One in 2015 when a non-hunter out of sight of a shooter was hit by a pellet from a bird hunter’s shotgun and a second incident in 2017 when a deer hunter did not identify what lay beyond his target.

According to NH Hunter Education Coordinator Joshua Mackay, New Hampshire’s excellent record for hunter safety is attributable to effective education. The average number of hunting-related incidents per year has gone down every decade since hunter education classes began in the 1960s when an average of 21.4 incidents occurred per year. Since hunter education became mandatory for all first time hunters in 1977, incidents declined steadily from an average 6.5 per year in the 1990’s to 3.3 per year after 2000. Hunter education classes train hunters to identify the target and to know what lies beyond it before pulling the trigger. The average for the past decade has been 2.9 incidents per year with 55% of incidents being self-inflicted due to careless firearms handling or falls from tree-stands. The chances of being involved in a hunting incident are low, just .0048% of hunters since 2000 were involved in an incident. Deer hunters, who far outnumber hunters of other species, were involved in 45% of the total incidents recorded and upland bird hunters (grouse, woodcock and pheasant) are a distant second with 24% of the total since 1977

According to the National Safety Council, you are more likely to be injured playing sports or using exercise equipment than while hunting. The rate of injury for 100,000 population for hunting is low compared to 129 for cycling, 65 for basketball, 39 for swimming and 16 for golf. The comparative risk analysis of sports and recreational injuries reveals hunting to be one of the safer outdoor recreation activities.* 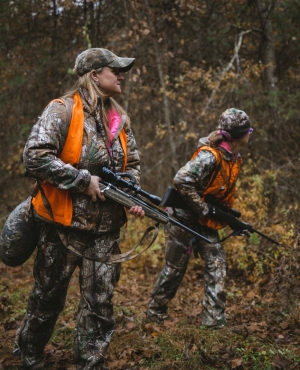 The 2021 muzzleloader season for deer opened October 30. The regular firearms season opened Wednesday November 10 and runs through Sunday December 5. Season end dates and either-sex deer hunt days vary by wildlife management unit. Typically, the latter majority of deer season is designated for antlered-only. By that time, there are far fewer hunters in the woods. A summary of hunting seasons is found here: https://wildlife.state.nh.us/hunting/hunt-dates.html

Hunting is an essential wildlife management tool that has helped to fund permanent protection of thousands of acres in NH for wildlife. Since passage of the “Federal Aid in Wildlife Restoration Program” (WR) commonly referred to as the "Pittman-Robertson Act" in 1937, New Hampshire has received nearly $80 million dollars for habitat management, purchase of lands for wildlife, research and for hunter education. The Pittman-Robertson funds derive from a federal excise tax on the sale of hunting and fishing equipment including firearms and ammunition, essentially a sales tax paid primarily by sportsmen and women. In 2006, the total to NH was nearly $3 million. During the last 15 years, there has been a spike in sales of archery equipment, firearms and ammunition with many of these sales fueled by recreational shooters rather than traditional hunters. The Wildlife Restoration Act funds allocated to NH in fiscal year 2021 totaled $4.1 million.

According to the US Fish and Wildlife Service website “the Wildlife Restoration Program provides grant funds to the states and fish and wildlife agencies for projects to restore, conserve, manage and enhance wild birds and mammals and their habitat. Projects also include providing public use and access to wildlife resources, hunter education and development and management of shooting ranges”

The WR funds also provide for NHFG land acquisition and management. According to Jim Oehler, NHFG Habitat Program Supervisor, NHFG now owns more than 60,000 acres in over 100 Wildlife Management Areas, properties focused on wildlife and habitat conservation and wildlife-based recreation, and holds an additional 25,000 acres in conservation easements. Most were acquired using federal funds. A state lands management team including Fish and Game biologists and foresters at the Division of Forests and Lands work cooperatively to plan, implement and influence habitat management on those and an additional 178,000 acres of State Forests and State Parks.

State hunting license sales dollars in the wildlife habitat dedicated accounts conserve habitat through land acquisition and help manage private and public lands. $40,000 is allocated annually from the habitat account for an average of 25 small grant projects each year to reimburse private landowners for pre-approved habitat management projects. This work is funded by a $2.50 contribution beginning 1998 with the creation of a law that required purchasers of hunting and trapping licenses to contribute $2.50 to a dedicated wildlife habitat account. Since its inception in 2001, the Small Grants Program, invested over $1 million in 928 habitat improvement projects on public and private lands.

“Hunters have contributed tens of millions to wildlife conservation in NH,” says Oehler.  “Their contributions help sustain wildlife populations and conserve lands that are enjoyed by all of NH’s outdoor recreationalists - whether they are hunters, hikers, or others.”

There are a few simple steps to safely enjoy hiking during hunting seasons:

1) Wear blaze orange clothing – a vest, hat or bandanna easily distinguished from any other color in the woods.

2) Avoid wearing white socks or gloves that could be mistaken for the flash of a deer's white tail. Obviously, don't appear like a deer in tan, dark brown and white colors.

3) If you hike with dogs, keep them leashed. Blaze orange dog vests, leashes and collars are available or tie an orange bandanna around your dog’s neck during hunting seasons.

4) Get a free copy of the NH Hunting and Fishing Digest at a local sporting goods store, tackle shop, hardware store or deer checking station to learn dates of local hunting seasons including the busiest “either sex” firearms season for deer in your local wildlife management unit. There are a limited number of days when does can be hunted. Peak numbers of hunters are in the woods during the early “either sex” portion of deer season. The NH Hunting and Fishing Digest is available online: https://www.eregulations.com/newhampshire/hunting

5) Stay on designated hiking trails; avoid bushwhacking. If you remain concerned about sharing the woods with hunters, consider walking roads or visit parks or areas posted against hunting.

6) Be courteous and respectful to hunters and non-hunters alike. Respect the rights of others to share the woods.

When conducted responsibly, hunting reconnects people to the land. A successful hunter must be wise in woods lore, learning the habits and preferred habitats of their quarry. The culling of individual animals from a regional population helps strengthen the overall herd. It takes experience with annual deer population fluctuations and available food supplies and winter severity to appreciate the role hunting plays in maintaining a healthy regional population.

The killing of animals for any reason remains distasteful to some people who remain opposed to hunting for ethical reasons. But the black crepe of public safety shouldn’t drape underlying anti-hunting sentiments based on personal, moral or ethical values.

Hikers need not fear the woods in November or perpetuate a myth that it’s unsafe to hike during hunting season.

Hikers and hunters share a mutual love of NH forests and could work to understand shared values rather than accentuate differences regarding consumptive vs. non-consumptive sports. Outdoors people are on the same team when it comes to responsible use and permanent conservation of public and private land in New Hampshire.