Homeless in the Woods 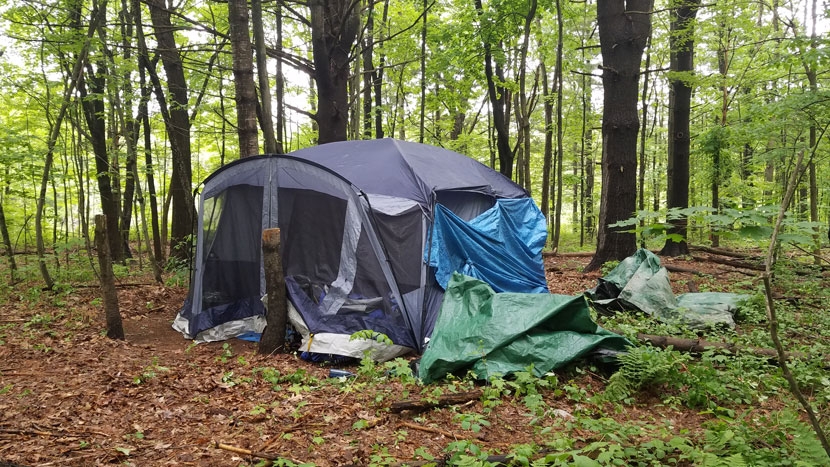 Conservation meets a harsh reality of modern society with the discovery of a homeless campsite in the woods in Concord. Abraham Ames/Forest Society Photo.

One thing I love about working for the Society for the Protection of New Hampshire Forests (Forest Society) is the variety of situations that I encounter. As a conservation easement steward, I spend a lot of time in the woods or behind a computer screen, but I never know what to expect. It's great when a problem comes along with a nice clear answer, but it often falls somewhere between black and white.

One issue I didn't expect to engage with as a conservationist is homelessness. It might seem like a big city problem, but it’s right here in small-town New Hampshire. I’ve been surprised at what's tucked away just out of sight.

My job as a steward takes me to many such places that the Forest Society conserves on behalf of private landowners who voluntarily give up certain rights to develop their land. In order to ensure their fields or forests remain protected as open space, landowners work with land trusts like the Forest Society who require stewards to monitor the lands and document any misuse.

One property in particular is closer to your backyard than you might think — in the middle of Concord, but tucked away just enough to be tempting to someone looking for a discreet place to camp. It might be one thing if someone stayed for one night and practiced Leave No Trace, but the volume of trash I observed being left behind decidedly pushed this situation out of the gray and into a problem that needed solving.

For this conserved land, camping and trash dumping are considered violations of the conservation agreement between the private landowner and the Forest Society. At the request of the landowner, my co-workers and I arranged a volunteer work day to clean this area up and resolve the violation.

It’s easy to be unsympathetic when all you see is the mess that’s left behind. But it was not lost on us that this space was filling a societal need—one which people don’t want to see, much less acknowledge its magnitude. Our clean-up day would get us up close and personal with problems which are all too often swept under the carpet.

Half of what we cleaned up were things often dumped in places off the beaten path: beer cans, soaking wet sleeping bags, torn-up tarps and tents. Yet, the fresher campsites told a different story.

The first truly somber moment was at a site I’d found already abandoned just a few weeks before. In the time since, the tents’ contents had been scattered about. But these weren’t the personal effects you might expect. These items once belonged to a respectable young person. They were things that any young adult might stuff into a backpack — Twilight novels, art supplies, coloring books of ornate animals, Celtic knots, professional looking clothes, paperwork for a driver’s license, makeup and Burt’s Bees lip balm — all strewn about the forest floor and slowly becoming one with the leaf litter.

Each item was a trapping of a responsible, ordinary person. I could tell this hit home for more of my colleagues that day than just me.

“This is kind of depressing isn’t it?” I said.

“This is definitely depressing,” replied a volunteer helping out for the day.

Who was this person? What happened? Where are they now?

The mood changed. We’d gone there to clean up a piece of nature, but there we were, bagging up someone’s life. Any pragmatic apathy we’d brought with us was gone. Unfortunately, as we learned one bag at a time, this person’s situation was not unique. 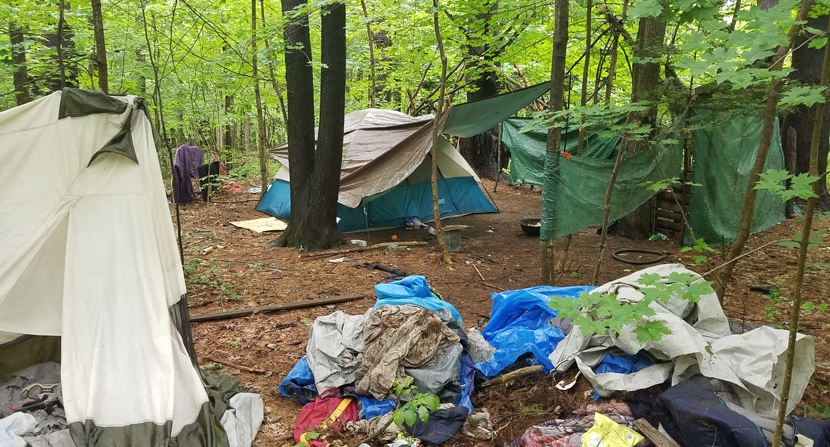 New Hampshire is the second most forested state in the United States (behind Maine). Forests occupy 81%, or 4.8 million acres, of the state. Source: NH Division of Forests and Lands

The last campsite was different. It was neat, thoughtfully constructed, and comprised high-quality camping gear. Its occupants did not have the landowner’s permission to camp, and were in an area marked “No Trespassing,” but they were going out of their way to be respectful. It was a nice, family-sized tent with a baby stroller tucked away in front. They had an expensive portable propane heater and cat food dish with fresh kibble. They’d taken the time to bring along their snowshoes. People had been there that morning. Here again, it looked like they had had to vacate an apartment with all they could carry to find a new place to sleep.

Our “get it done” attitude made us want to start tearing it down, but the kibble and outdoor recreation equipment gave us pause. We were looking at all that was left of someone’s stuff, and they were coming back. I didn’t want to be responsible for throwing away all the earthly possessions of someone down on their luck, much less leave them with nowhere to stay that night.

After talking it over, everyone agreed. For all we knew, they were at work and would be coming “home” cold and tired. We decided to leave a note, telling them that we’d cleaned the area, and would give them a week to vacate on their own terms.

We wrapped up the rest of the trash and headed out of the woods. The volunteer crew parted ways after a job well done, and I stayed behind to leave a note on our camper’s tent. Perhaps it was lucky that I had to walk back to my car for pen and paper.

As I turned back, composing the note in my head (“Which is friendlier: ‘Hi’ or ‘Hello’?”), I saw what looked like two bedraggled Appalachian Trail hikers pass by. I held back a moment and tried not to be obvious that I was watching. They took the turn toward where we’d been working, and then disappeared down the trail we’d just cleaned out.

“OK, so this is good, right?” I thought as I considered my options. They had to be talked to, but it was too late for a nice anonymous note. What is the risk here? I didn’t think I’d be in danger, but I also wasn’t enthusiastic about giving these people an eviction notice—perhaps their second in a short time.

This was happening in the forest, but it was not my world. I called the police to see if there was anyone nearby and to get some advice. They strongly suggested that I hang tight and let them handle the confrontation. Officers arrived within a few minutes, and they apparently have the routine down. I was glad to see they were disinterested in hassling these people in any way. I didn’t want to feel responsible for any further misfortune in their lives.

They had a nice talk. They’d signed a lease and were moving into an apartment on Monday. They were very thankful that we hadn’t dismantled and bagged what was left of their lives. The police were glad that we were giving them time to relocate.

I breathed a sigh of relief. We’d made the right choice, to leave this violation be. I’ll have to go back and check on it soon. But I hope to find a nice, neat, empty space that people used for a short while to get their lives back on track.

Post Script: I visited the area a week later, glancing over my shoulder to see if anyone took notice. All evidence that they had been there was gone. Our campers clearly understood the tenets of Leave No Trace.

I’m grateful for the respect they showed for this land.

Abraham Ames is a senior easement steward for the Society for the Protection of New Hampshire Forests. Forest Journal runs every other week in the New Hampshire Sunday News. Reach Abraham at aames@forestsociety.org.