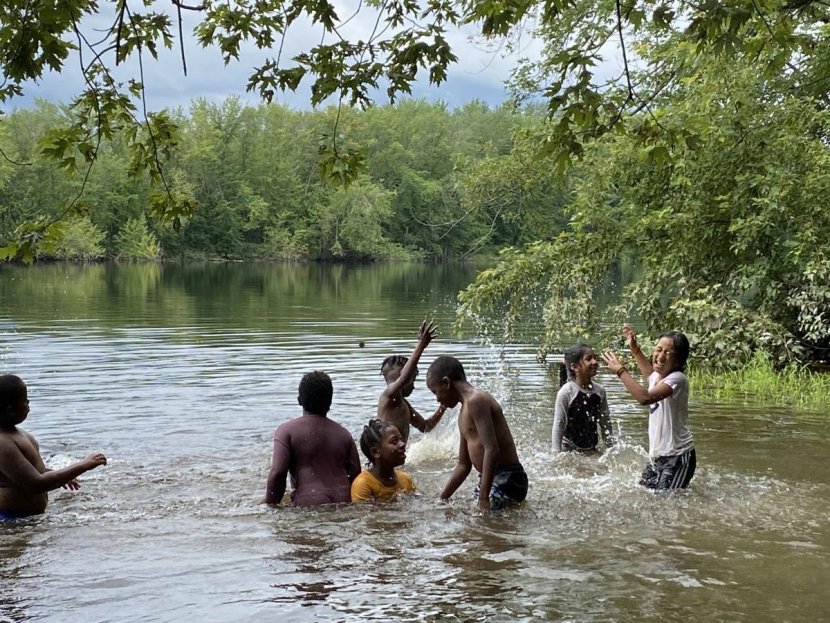 Campers from a summer program at Concord’s Broken Ground School play in the water at the Forest Society’s Merrimack River Outdoor Education and Conservation Area in Concord. (Photo: Dave Anderson)

This summer provided a stunning reversal in fortune — from a prolonged drought and elevated brushfire danger by June to record rainfall during July.

Wild weather whiplash was a welcome drought-buster: We haven’t had to water our gardens or lawns for a month. Friends with home solar panels commented July was a poor month for energy generation from sunlight despite the longest day length of the year.

At the end of July, Concord recorded its second-wettest month ever (since 1868) with over 13 inches total rainfall. Our hilly little village of South Sutton received 17.2 inches, following Hopkinton at 17.3 and Keene at 17.6 for the most sodden New Hampshire locales in July. A friend in Salisbury recorded 5 inches in her rain gauge from the July 29 downpour alone.

The serious downside in all this included flash flooding, washed-out roads and damaged culverts and driveways in the hilly terrain of western New Hampshire. The Monadnock Region highlands extend north to mounts Sunapee and Kearsarge and to Cardigan Mountain at the southern edge of the White Mountains.

Normally placid mountain brooks in the headwater regions of the Ashuelot River, Sugar River, Blackwater River, Warner River and Contoocook River typically dry up in mid-summer. But these feeder brooks are “flashy” — prone to rapid rise during heavy summer thunderstorms and then rapid ebb to normal water levels when a pulse of heavy rain moves downstream.

This year, saturated forest soils and brim-full wetlands of the upper headwaters have sustained a prolonged flow, a slower release of groundwater over days and weeks following the heavy rains.

The flashy feeder brooks jump their banks in the uppermost headwaters, while in the lower reaches of rivers, the communities face potential for urban flooding of impervious surfaces like roads and parking lots.

Rural and suburban landscapes that retain a high percentage of intact forests and wetlands are spared the worst of the flooding. The severe weather alerts of impending thunderstorms with a potential for flash flood problems are typically ‘business as usual’ for forests unless these events have become more frequent and severe.

The lower valleys of major rivers — the Connecticut and Merrimack — are spared serious flooding because of forest that covers the hills of the headwaters upstream and acts like a sponge.

The lower watershed of the Connecticut River includes productive agricultural soils and active farming where heavy runoff can spread across the floodplain.

The lower Merrimack River — south of the farmland of Boscawen, Canterbury and Concord — has a rich history of industrial mills and burgeoning cities. Pavement and building infrastructure cover a higher percentage of land area in Manchester, Nashua, Lawrence, Lowell and Haverhill, where heavy rains temporarily flood urban and suburban streets and parking lots.

According to the Merrimack River Watershed Council July featured “massive rainfall events, and unfortunately that has led to numerous combined sewer overflows going into the Merrimack River. Climate-change effects, along with increased regional population growth and urbanization have exacerbated the problems of the Merrimack Valley’s aging sewage infrastructure.”

Contrast the Merrimack Valley cities with more undeveloped floodplains of farms and wetlands where forests function like a vast sponge — absorbing and storing volumes of water and providing flood attenuation services we may take for granted.

Summer on the river

I recently joined campers from a summer program at Concord’s Broken Ground Elementary School. Our plan — as always — was to see what the river might share and teach us during a morning of unstructured play at the Forest Society’s Merrimack River Outdoor Education and Conservation Area in Concord.

The access trail leads from a parking lot through white pine woods to a unique silver maple floodplain forest. The bank-full wetland forests were largely dried up by mid-June.

In addition to the flood attenuation role, the open space along the river here is “green infrastructure” for learning and sharing and simply exploring.

These campers reminded me that splashing, swimming and playing at making mud pies along the river’s banks are also essential services provided by a river that has shaped New Hampshire and its residents for centuries.

Naturalist Dave Anderson is Senior Director of Education for The Society for the Protection of New Hampshire Forests. Contact him at danderson@forestsociety.org.