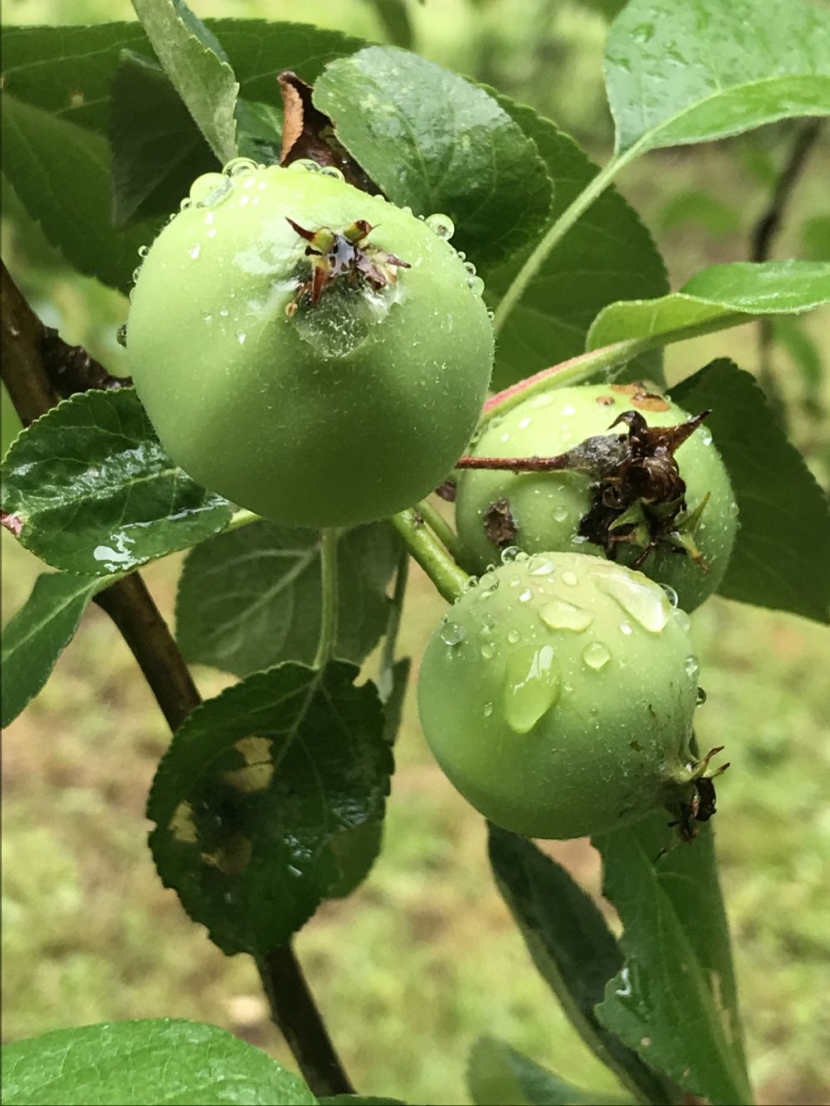 A strong apple crop — along with acorns and beech nuts — are ripening into the most critical wildlife food sources for the coming autumn.

The flowers of deciduous hardwood trees are small and inconspicuous: ash, maple, birch and oak. More people notice the pollen count as an allergen in May for those who suffer pollen allergies. Rainy, cool weather in April transitioned through a cool May to a hot and dry June – perfect for pollinators. Foresters, wildlife biologists and homeowners are watching a strong year for the development of the forest foods that will ripen into autumn apples, acorns and even a good pine seed crop in New Hampshire forests.

Fruit trees and oak forests with acorns are THE supermarkets of the forest.

The success of autumn foraging to fatten for winter survival is correlated to heavy fruit and acorn seed years. Sometimes the connection is less direct: fruits and seeds ripple up the food chain from small rodents to feed adult populations of larger predators including hawks, owls, weasels, foxes, coyotes and bobcats preying on mice, voles, squirrels and chipmunks. Seed years eventually translate to higher spring birth rates and survival of offspring including predator pups and kits. The chipmunk population rapid rebound in 2020 is partially due to more seeds available in autumn 2019. 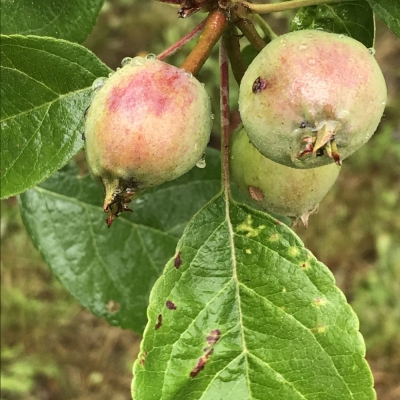 Fruit trees have showy blossoms in May. Proper pruning in late March and early April allows sunlight into the boughs of gone-wild apple trees and fruiting crabapples and wild blueberries to produce more blossoms which yield more food for wildlife.

Step One working with wild apples and blueberries often includes “releasing” fruiting trees and shrubs by removing overtopping trees that shade them. Step Two involves careful pruning to cut away dead and diseased branches and those shaded beneath the canopy. It can be labor-intensive using ladders to reach the upper-most branches. Pruning stimulates new growth of leaves and flowers by increasing sunlight and air circulation in the foliage.

Dave O’Hearn and his wife, Karen of Exeter operate their business “Field of Dreams Mowing.” O’Hearn participated in the Forest Society’s annual late-winter workshop on pruning wild apple trees. O’Hearn hunts and works with tractor and chainsaw to reclaim overgrown fields for customers in the Seacoast Region. He clears field edges and old stonewalls to cut competing brush and bittersweet vines and to release and prune wild apples for wildlife.

Do you remember the “squirrel apocalypse” of 2018?

Autumn 2018 was a no-acorn-autumn driving the peak squirrel population to mass migrate, swimming across lakes and crossing roads statewide. Other rodent populations had also peaked following strong seed crops in 2016 and ’17. Mice were entering homes looking for food that was scarce to non-existent in the forest.

Wild apple trees were heavily-damaged that autumn by foraging bears. With few wild apples available as a sole food source, bears climbed and broke down branches, snapping off limbs. O’Hearn found damaged apple trees that did not produce fruit in 2019 and pruned them. They flowered again this spring. 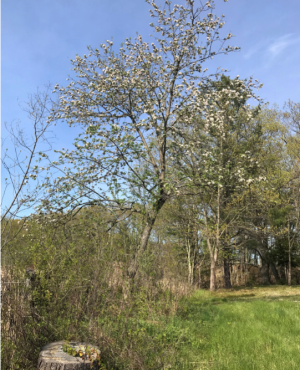 O’Hearn wrote in May:

“In 2017 we took down a large pine because it was shading the field. We found an apple tree under its towering limbs. Yesterday it was full of honeybees and bumblebees. It almost hummed. Yesterday, the apple blossoms were in full bloom. I took a ride around the farm to count apple trees. The blossoms made the apple trees recognizable. I counted 67 apple trees and 1 pear tree in approximately 10 acres. Two had severe bear damage. I pruned them hard and they did flower again this year. We are going to have a good apple crop this fall.” 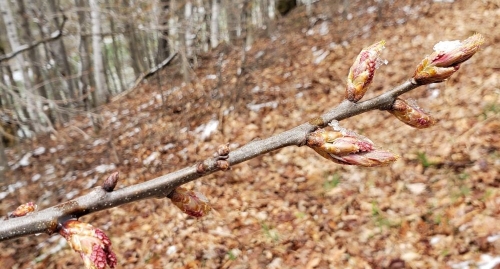 “It's not an easy thing for trees to put out a whole bunch of seeds every year. A tree needs to try to reproduce but also keep itself alive by storing energy for its own growth and survival. Trees are not ‘selfish.’  There is a balancing act: if trees produced tons of food for wildlife we would also have an overabundance of wildlife which would consume all of that food. Seed crop cycles introduce balance. A large seed year overwhelms the critters available so there will be a greater chance that some seeds will sprout. And in off years, the lack of seeds lowers the seed predator populations in preparation for a next big seed year.”

Junkin’s recent photos show developing acorns along a fresh green oak twig in May. It looks like another solid acorn crop year and will represent strong back-to-back acorn crops. There is a roughly 4-year cycle of boom and bust in acorn production regionally.

Pine seed crops are important for birds, mice, red squirrels and to foresters. The conspicuous yellow haze of pine pollen coating cars and puddles each June comes from small male pollen producing parts that fall off by early July. You find them now casting a golden honey-brown tinge to lawns and the forest floor. Female cones take two summers to mature. Last year, female cones were small and inconspicuous. This year, longer, second-year sticky green cones are becoming more visible amid the needles. These cones will ripen and open in autumn to release wind-blown seeds. It can take 3 to 5 years before the next white pine heavy seed crop.  Look up into the highest boughs of White Pine this summer and you will see the green cones which will open this autumn.

Timmons shared with forester, Steve Junkin the mast survey data set for the 22-year period of 1997 to 2019 and explained the “data provides annual trends in acorn production. The survey primarily tracks production of red oak as other oak species (i.e. white oak, black oak) have a limited distribution in NH… We collect mast data for 11 different species and provide a mean production score by Wildlife Management Unit. We find this mast survey data very useful and I’m glad to hear others may as well.” 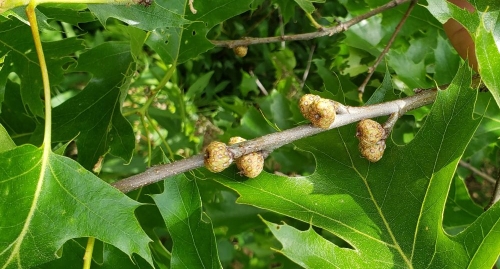 Tiny inconspicuous green oak flowers are now yielding green apples and green acorns in July. These ripen into the most critical wildlife food source for the coming autumn and winter.

Pofessional wildlife biologists and foresters are encouraged that 2020 appears to be shaping up to be another good acorn and apple crop year. I would guess that squirrels, porcupines, bears and deer will also begin to check apple trees and beech and oak forests as summer proceeds.