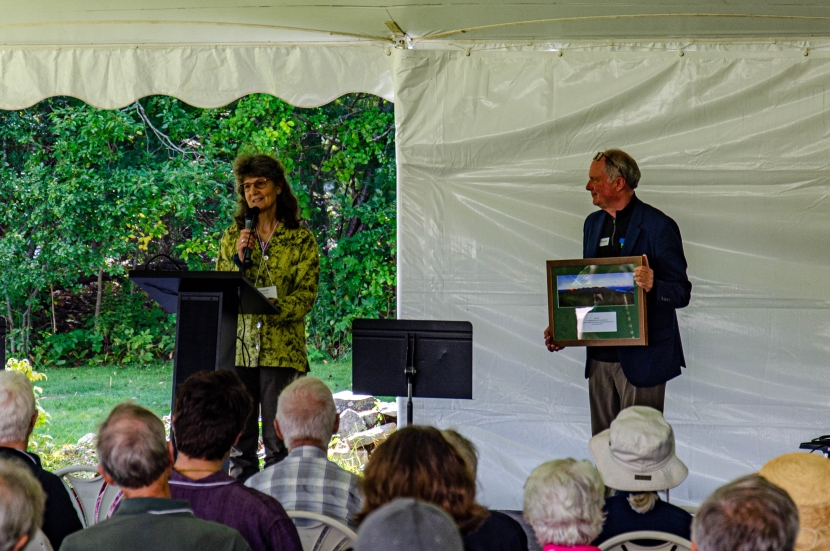 Sarah Thorne, wife of the late Tom Howe, accepted the Conservationist of the Year award, for Tom, from President Jack Savage on stage at the annual meeting.

After going virtual in 2020, the Forest Society’s annual meeting returned to the outdoors on September 25 when nearly 150 people visited Creek Farm for field trips, picnic lunches, and the traditional business meeting that marks the beginning of a new year. This year’s program also included a special conversation with Dr. Carolyn Finney, author of “Black Spaces, White Faces: Reimagining the Relationship of Black Americans to the Great Outdoors,” about identity, land, and belonging. Finney is the Environmental Studies Professor of Practice at Middlebury College's Franklin Environmental Center.

(See a compilation of photos and video from the meeting below, with special thanks to volunteer photographers Kate Wilcox and Johanna Pastoriza and staff member Frank Allen for videography.)

Finney gave attendees a taste of her latest project, called "The N Word: Nature, Revisited (an imagined conversation with John Muir)," where she examines what it means to "be Black and be Green" in a moment of racial reckoning. She aims to call out Muir, the "father of conservation," in order to call viewers into a new relationship with nature and each other with her performance piece.

Finney also answered questions from attendees about how to widen the lens through which we experience natural spaces that often have deep, complicated histories.

"There's a way we could reframe what it means to provide facts about a place," she said.

For example, signage for a particular property could note that the history of the land is a story, not the only story.

President Jack Savage also addressed the theme of land and belonging in his remarks, highlighting a new collaboration with the Black Heritage Trail of New Hampshire:

“Last weekend I had the privilege of joining JerriAnne Boggis,of the Black Heritage Trail, at our Welch Family Forest and Farm in Hancock New Hampshire, where we celebrated bringing to light the story of a free black family who settled that land in the late 18th and early 19th centuries,” Savage said. “It has been a forgotten story. We feel an urgency to tell that story now as part of our effort to make conserved lands welcoming to all.”

Awards presented during the meeting included:

The Forest Society also presented its 120th Annual Report at the meeting. Read all about our accomplishments over the last year here.

Print copies are available upon request. 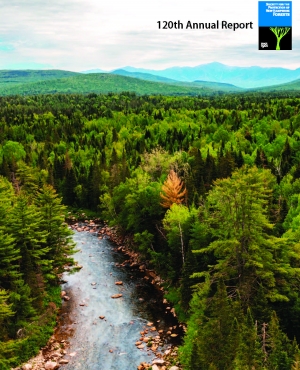