Stairs Give Way to Nature at Madame Sherri Forest 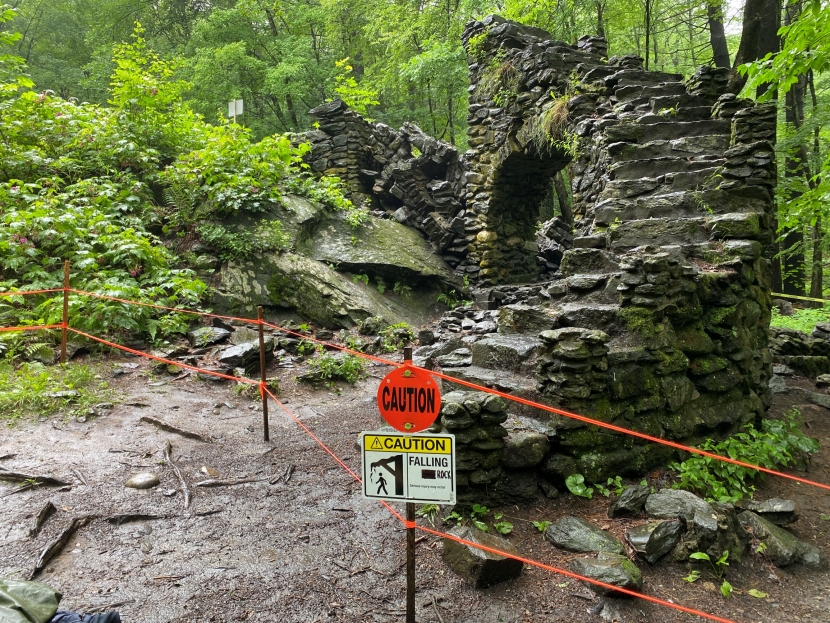 After days of heavy rain following Hurricane Elsa, visitors to Madame Sherri Forest discovered on July 11 that part of the ruins of the historic castle had collapsed as the mortar between the stones disintegrated. No injuries were reported.

The top roman arch of the stone staircase that once graced Madame Antoinette Sherri’s forest chateau in Chesterfield, which had been in poor condition for many years, was reported fallen by Lynne Borofsky of the Chesterfield Conservation Commission, which works with the Forest Society to manage trails on the reservation. Visitors had long been cautioned not to climb on the ruins. 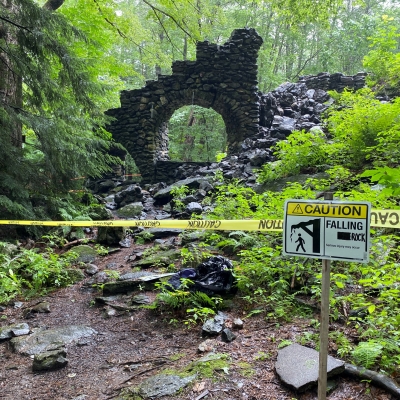 Visitors should not climb on the ruins and should respect the restrictions for this property.
The remains of Madame Sherri’s castle are currently roped off as the Forest Society continues to assess the situation. The trails remain open across the 513-acre property.

The Madame Sherri Forest is named after a former owner, Madame Antoinette Sherri, a Paris-born theatrical costume designer who worked in New York City during the early 1900s. She and her husband built a French-inspired chateau summer house in Chesterfield that featured extensive stonework including a roman arch stairway, ornate interior, and designed landscape gardens.

There, they lavishly entertained their New York City friends at parties during the Roaring 1920s. Madame Sherri became famous — or infamous — for her wild parties. Her chauffeur-driven Packard, her fur coat, and her fast crowd of friends made the townsfolk talk whenever she appeared. However, in time Madame Sherri’s fortunes declined, and her castle fell to ruin and vandalism.

After a long separation, she returned to the house in 1959 to find the interior badly vandalized. She left, heartbroken, never to return again and passed away in 1965. The house burned down completely in 1963 except for the stone foundation, stairway, and a large empty fireplace tapers to a freestanding chimney.

It was thanks to Ann Stokes, who loved the property and its theatrical legacy, that the property was permanently protected. Anne purchased it shortly after Madame Sherri passed away in 1965. Over the next several years, she hosted several concerts and parties, using the foundation and stairway as a stage for elaborate sound and lighting displays. 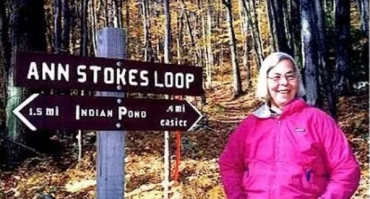 Carrie Deegan, reservation stewardship and engagement director for the Forest Society, spoke to the Keene Sentinel about the partial loss of the stairs at Madame Sherri Forest:

"It surprised us as much as anyone,” she said. “It’s a cool and much beloved site in New Hampshire, but it is a 90-year-old stone ruin — this was always a possibility that we knew might happen.’”

Today, the 513-acre reservation, situated on the eastern slope of Wantastiquet Mountain, also known as Rattlesnake Mountain in Chesterfield, abuts the larger, 847-acre Wantastiquet State Forest. Trails on the Madame Sherri forest are linked to the larger Wantastiquet – Monadnock Trail, which stretches from the Connecticut River east to Mount Monadnock.

But, it was the ruins of Madame Sherri's castle that has drawn thousands of visitors to the Forest Society reservation each year. 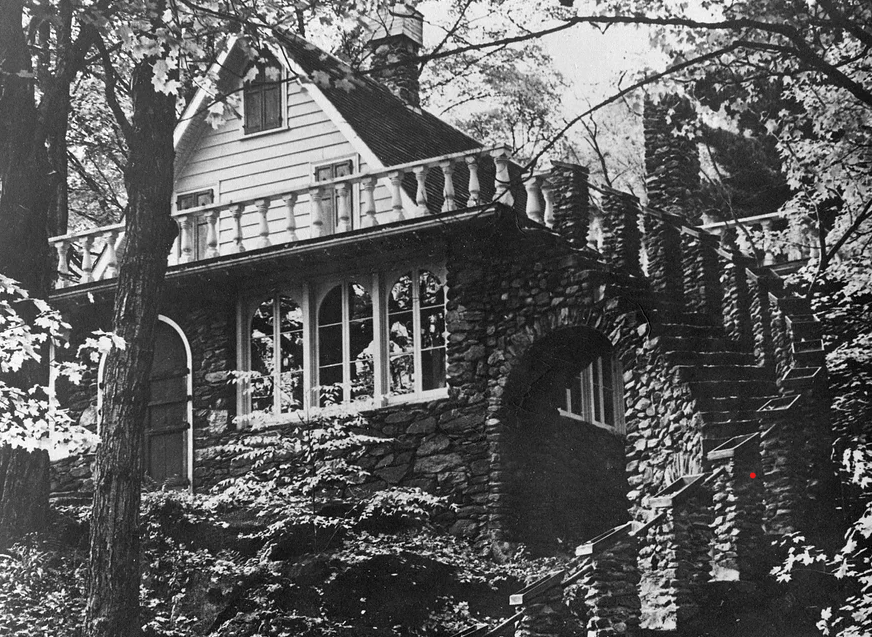 A photo of Madame Sherri's summer house. (Courtesy of the Chesterfield Conservation Commission and Historical Society)
Over the last decade, the site was highlighted by the online magazine Atlas Obscura, and featured in in Haunted Hikes of New Hampshire, a book by Marianne O’Connor. It became one of the most visited (and photographed) destinations among the Forest Society’s 190 protected reservations, attracting around 10,000 visitors a year. The Forest Society guide to the reservation is still one of the most-viewed pages on the organization’s website today.

“Gravity is constantly at work, and this is a ruin, so it’s no particular surprise that pieces fell down. This is about the passage of time, and about the immutable force of gravity, I suppose. I’m sad and sorry for those people for whom it’s a particularly special place, but it’s not to be unexpected.

It’s really captured people’s imaginations and attention, so when part of it falls down it’s no wonder that people are sad to hear about that and care about it. There’s a story attached to it.” 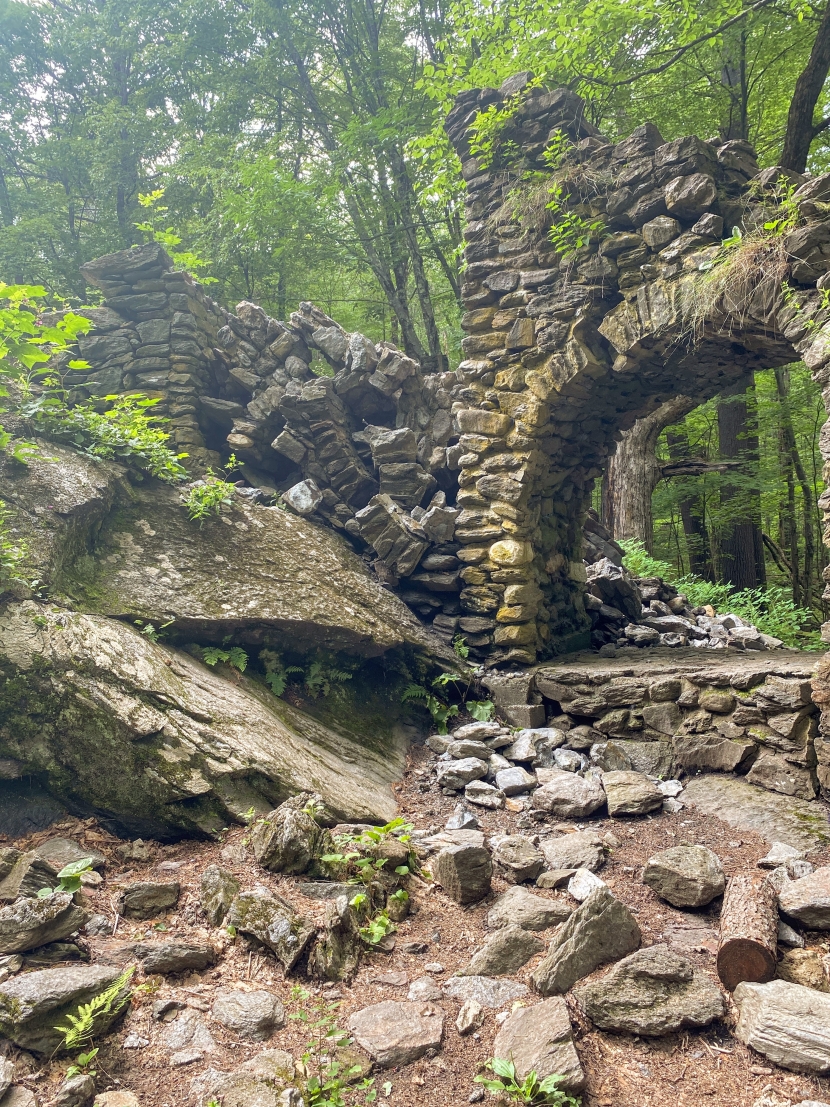 Although the arch that collapsed last weekend is no longer, many memories remain. Do you have a favorite photo of the ruins you've taken at Madame Sherri Forest? Share it by tagging us (#ForestSociety #MemoriesofMadameSherriForest) on social media and include the year! We'll compile a selection that reflects the years — and seasons — of change that this historic site has seen. **Please, NO photos of anyone on the stairs.**​

Watch a Visit to the Partially Collapsed Staircase at Madame Sherri: