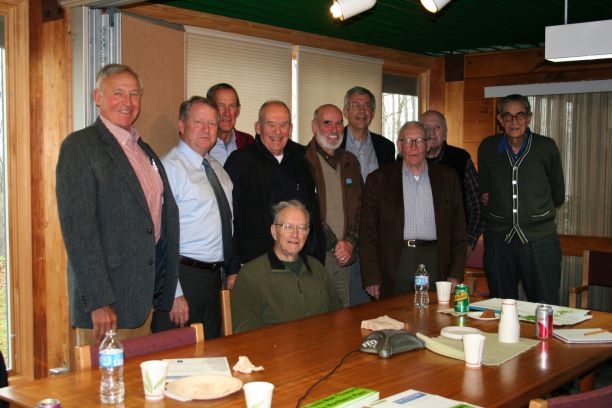 Harold Janeway, standing third from left, was a member of the President's Foresters Council, pictured here.

Harold Janeway, of Webster, New Hampshire left an indelible mark on the Granite State as a conservationist.

At the Forest Society, Harold was a member, a mentor, an advisor, an inspirer and a possibilist.

His dry wit kept us grounded. His ability to cut to the chase kept us focused. His soft-spoken leadership made big ideas attainable.

In the 1980s Harold served on the Forest Society’s Board of Trustees. During his two years as Chair (1986-88) he helped then-President Paul Bofinger establish the Trust for New Hampshire Lands (TNHL), one of the most creative land conservation initiatives the Society has ever launched. The private, non-profit TNHL partnered with the State in 1988 to create the public Land Conservation Investment Program (LCIP). 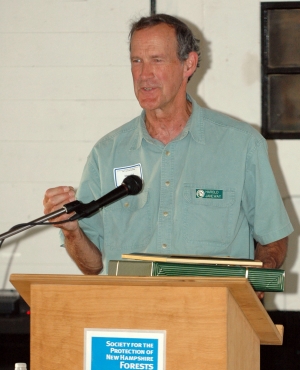 Harold Janeway was instrumental in establishing the Trust for New Hampshire Lands.
Over its six years this partnership permanently conserved more than 100,000 acres of land statewide. The Trust raised private funds to pay for the staff and operating expenses of both the Trust and the LCIP; the State invested $50 million in public funds to acquire land and conservation easements on privately owned land. Harold’s leadership skills were key to raising private funds to support the work of TNHL and to building the strong bi-partisan support needed to move this idea into action at the State House, enacting the state law that established and funded LCIP.

This was one of many significant contributions Harold made over his lifetime to make New Hampshire the special place it is.

Harold died on August 20, 2020. His friendship, his humanity, his humor and his legacy as a leader in the conservation of New Hampshire’s natural resources live on.

Read more about Harold Janeway in the Concord Monitor and read his obituary here.