In Praise of Muskrats 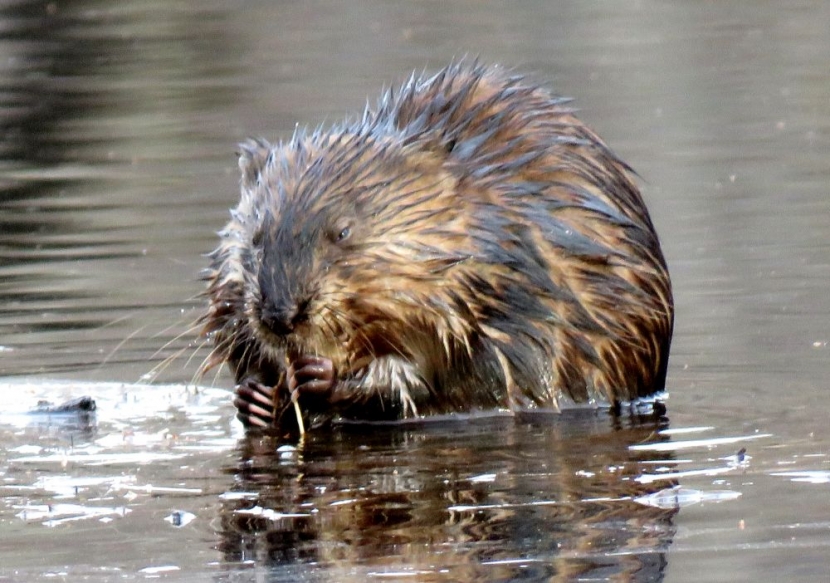 Muskrats were once prized as food - a meat as acceptable as fish to eat Friday during Lent.

Passover on the Jewish Calendar, Holy week on the Christian Calendar, Muskrat Week on the Floodplain Calendar.  This weekend, with the last of the ice melting away, muskrats were out and about in the marsh, in the Mill Brook and in the Eastman cove at the Forest Society "Merrimack River Outdoor Education and Conservation Area" (MROECA) along the Merrimack River.  I find plenty of opportunites to take muskrat pictures, but I find daily, there’s always an even better muskrat!

These photos here show off the tail and coat.  Some other photos sharper and show off their amazing forepaws and squinty eyes. 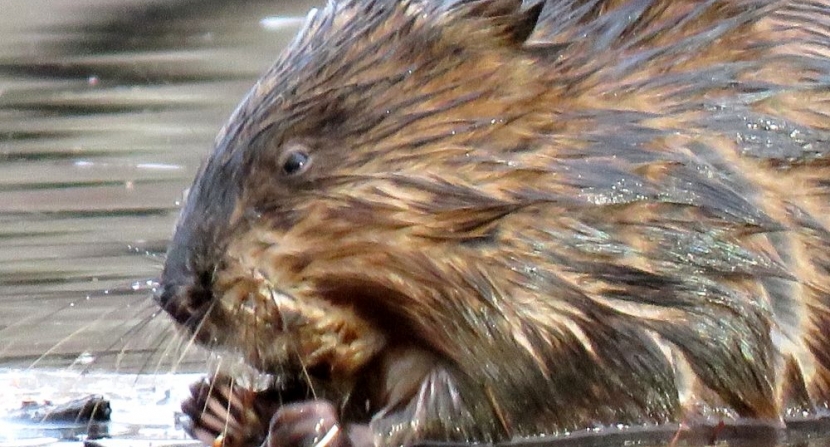 I always feel like muskrats are underrated, ignored even, because our area’s other aquatic animals are flashier--- otters, who always look like they’re having a blast, beavers, who take down trees and  alter landscapes when no  one is looking,  and the mink with its high-end wardrobe.  Muskrats don't seem to get as much respect.

According to an acccount by Author John Holusha in The New York Times entitled "Wyandotte Journal; Where the Muskrat Is a Delicacy for Lent"  muskrats occupied a unique culinary niche for Catholics:

"Muskrats are the moral equivalent of fish for otherwise observant Roman Catholics in this blue-collar town just south of Detroit. Every Friday in Lent, when church rules call for abstinence from meat, these Catholics gather in family kitchens, fraternal halls and a few restaurants for meals featuring the little swamp rodent as the main dish.

Although the Archdiocese of Detroit can find nothing in its archives, generations of residents in the Downriver section of Michigan believed they had a dispensation from the church to eat muskrats on meatless days. The notion was that since muskrats (always pronounced MUSH-rats here) live in the water like fish, they should be considered the same. 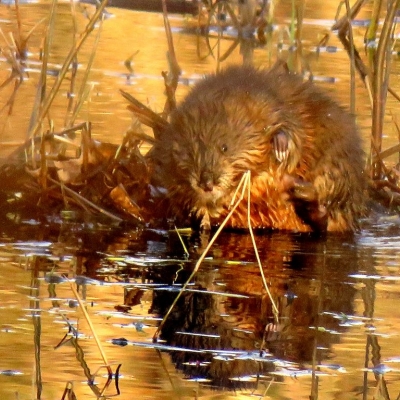 Muskrat with vegetation by Ellen Kenny

''I was raised as a Catholic and we always knew it was O.K. to eat mushrats on Friday,'' said Craig Johnson as he dug into a plateful of muskrat and potato patties at Kola's Kitchen restaurant here. ''My mother served it on Fridays for years.''

To outsiders who express some repugnance at the thought of eating rats of any variety, Downriver residents have ready answers. Muskrats live in the water and wash the plants they eat before eating, they respond. ''They're cleaner than chicken,'' is a typical comment.

The taste is reported to resemble that of duck.

Muskrat eating is deeply ingrained in the customs of the swampy region along the Detroit River between the Motor City and Toledo, Ohio. According to historians, the roots extend all the way back to Detroit's founding in 1701 by Antoine de La Mothe Cadillac as a French fur trading post on a narrow part of the Great Lakes waterway. He named it La Ville d'Etroit, the city on the strait, later anglicized to Detroit. Settlers lived off the land then and muskrat was one of the few sources of meat in winter."

EDITORS NOTE: There is no word on muskrat response to discarded plastic water bottles... or any plans to record a sequel to the 1970's Pop Rock classic Captain and Tenille song: "Muskrat Love."   Perhaps that's a good thing? 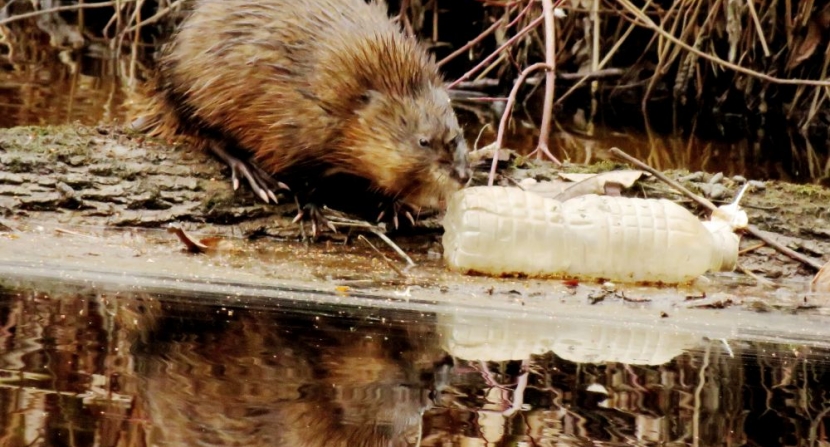 So here is all I know about muskrats and why we should hold them in the highest regard:

Like their beaver cousins, muskrats are rodents, but they’re the only member of their genus, Ondatra.

Hunkered up on a log, nibbling a twig held between surprisingly delicate forepaws, you wouldn’t think this animal was aquatic.  It looks rather like a furry dumpling.  In the water though, it’s vertically flattened tail whips from side to side and , along with its webbed hind feet, propels it up a stream amazingly fast.  They can apparently remain underwater for 12 to 15 minutes. 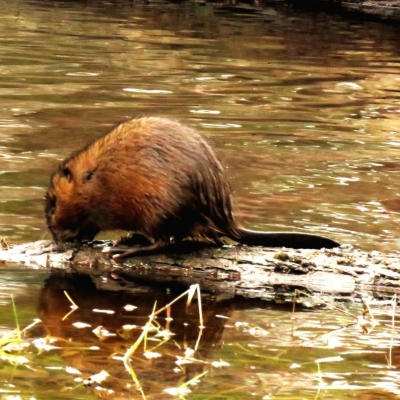 Over the past 3 or 4 days, I’ve watched them swimming purposefully up and down the Mill Brook, bringing face-fulls of leaves and vegetation to a hidden secret spot tucked up and beneath the bank--- householders going about their Spring renovations.

I’ve seen these peaceable little guys share a log with turtles, and sit  on a beaver lodge within a foot or two of  a nesting  Canada goose.    This morning I watched one foraging in a shallow weedy area where the millbrook spills into the marsh, right beside a pair of mallards. 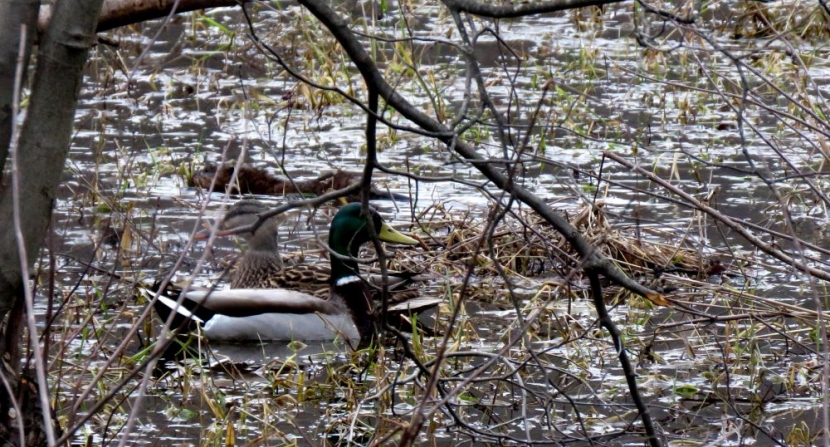 Mallards with muskrat by Ellen Kenny