Not Your Typical Vacation to Mount Monadnock 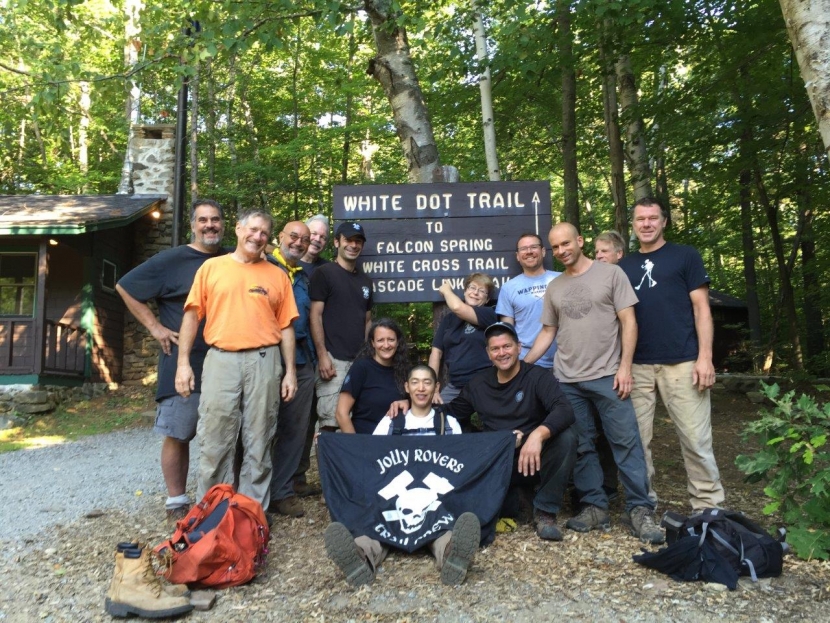 The Jolly Rovers Trail Crew is as hardcore as the name suggests.  This all-volunteer group from New York’s Hudson Valley recently spent 10 days working on a project halfway up the slopes of Mount Monadnock, on the heavily traveled White Cross Trail.  They built a rock staircase, 32 steps long, out of what was previously a complete jumble of boulders ranging in size from 2-year old toddlers to Volkswagen bugs.  A staircase of that length is an incredible amount of work in such a short span of time, but the Jolly Rovers are really well organized, really experienced and well, really hardcore.

Each summer, the Jolly Rovers mobilize a crew of 20-30 highly skilled volunteers to tackle a large trail project somewhere with publicly accessible trails that are in need of help.  Their specialty is rock work, front country and backcountry masonry, and they’re very good at it.  To join the Jolly Rovers Trail Crew is no small matter- new prospective members must complete a series of training workshops focusing on tools and leverage, rigging to move rocks, and stone splitting, shaping and setting.  Following that is a year of apprenticeship in which dozens of hours of work with the crew are required, and finally the apprentice must be voted in as a full member of the crew by unanimous vote.  And then, members have to keep their skills up by committing to a certain number of hours and projects each year.  Director Chris Ingui says 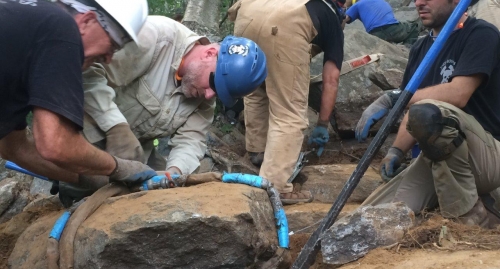 The crew at work on the White Cross Trail. Photo by Jolly Rovers.
that commitment isn’t usually a problem.  “Most crew members volunteer upwards of 10-15 days each year on trail projects,” he says, “they’re happy to spend their weekends and vacations doing this work.”  The Rovers are dedicated to fostering a “positive culture” among volunteers, making the trail crew experience as safe and enjoyable as possible.  “The camaraderie is the best part” says Chris, “it’s really why we’re all here.”

When I visited the project site on Mount Monadnock’s White Cross Trail, the Jolly Rovers’ highly structured approach was immediately evident.  Chris was acting as the overall Crew Leader, and the other members on site that day were assigned to smaller groups of 3-4 people, each with its own Project Leader and each responsible for a different task or section of staircase.  The small work teams were all absorbed in solving different problems, shaping a large rock so it could be set as a step, hammering large rocks into crushed gravel for use in setting, or moving an enormous rock out of the way using only iron bars and old-fashioned muscle.   They were having fun, teasing each other and laughing, but also genuinely captivated by the puzzle of building something deliberate and amazingly enduring out of nature’s chaos. 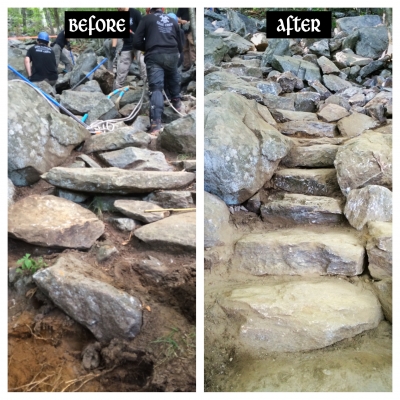 Before and after on one section of trail. Photo by Jolly Rovers.
“For every rock [that we want], we have to move eight others” laughs Chris.  “With this particular step,” jokes Project Leader Alicia Mandelkow, looking down at the huge rock her group had just wedged into place, “I think it’s more like twelve.”

The Jolly Rovers admitted that this project on Monadnock was one of the most difficult they’d ever tackled, in part due to the incredible  amount of jumbled rock and in part because schist, a metamorphic  rock prevalent on Monadnock, doesn’t tend to split easily and cleanly.  And, they were halfway up a very busy mountain, with a near constant stream of hikers passing by.  As their black “skull and crossbones” banner and t-shirts piqued some interest from hikers, the Rovers were happy to pause and answer questions about their work, hand out business cards and invite people to check them out online and on facebook.  After all, part of their mission is improving the region’s most heavily trafficked trails, where their work can benefit the most people and have the greatest impact.  Monadnock doesn’t disappoint, in that regard, and we’re very thankful that the Jolly Rovers chose this iconic New Hampshire landscape to be the beneficiary of their expertise and 720 hours of hard work.  We hope they continue to do this good work for a very long time, and if their t-shirts are any indication, they will.   A line on the back 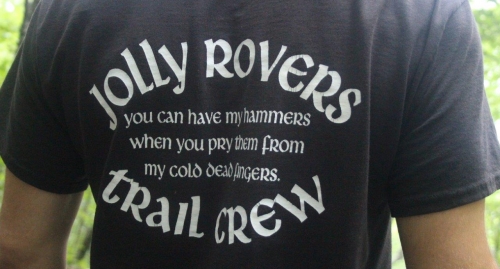 Crew members earn the right to wear this "uniform." Photo by Carrie Deegan.
reads, “You can have my hammers when you pry them from my cold, dead fingers.”  If that isn’t hardcore, I’m not sure what is.

You can find out more about the Jolly Rovers Trail Crew at their website www.jollyrovers.org, or find them on facebook.