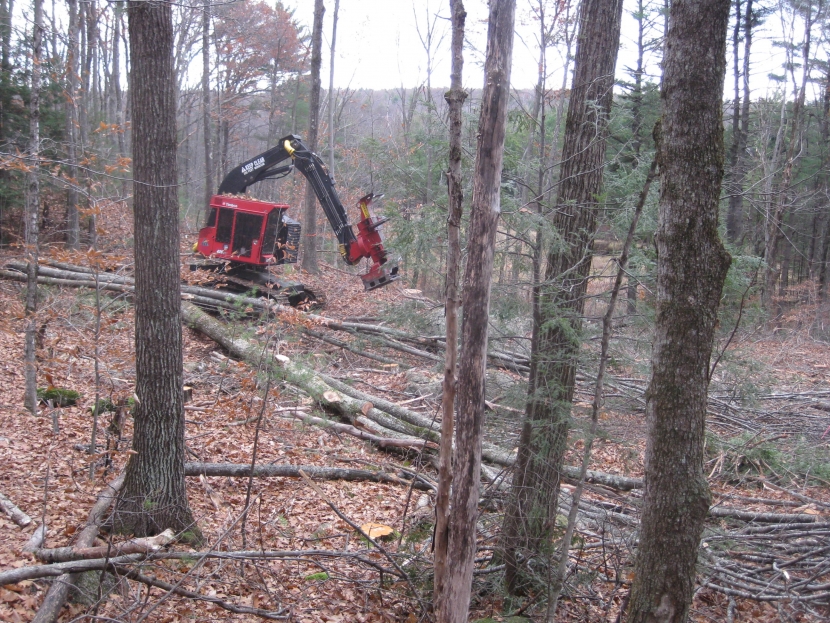 The Open Journal of Forestry published an article last week that examines some of the effects that whole-tree harvesting has on northern hardwood forests.  It just so happens that this research was done by me during my time as a forestry student at UNH, before I began as a forester for the Forest Society.  Part of the role of a researcher is to explain your research to others, and part of the role of a forester is to keep up-to-date on the latest research, so I thought I’d summarize the research here as a way of felling two trees with one axe.

Whole-tree harvesting is the practice of cutting the entire above-ground portion of a tree and removing it from the forest.  The different parts of the tree are used for different purposes – the trunk is often sawn into dimensional lumber, while the tree top and limbs can be chipped and sold to a biomass energy plant.  This harvest method can be contrasted with “conventional harvesting”, which uses the tree trunk in the same way, but leaves tree tops on site to decompose.

The advantage of whole-tree harvesting is that it provides another forest product and income source for landowners.   It also produces electricity by using a renewable product (tree  tops and limbs) that can be harvested locally.  Biomass chips are not very valuable (one or two dollars a ton usually), but they can provide a financial incentive to cut unhealthy, low-value trees that may not otherwise have a use.  By increasing the utilization of the trees that are cut, a harvest designed to improve the health and vigor of a forest may be more economically feasible.

However, concerns about whole-tree harvesting have existed since the 1970s, when machinery that first enabled its practice was developed.  This concern was centered on the idea of the potential for soil nutrient depletion.  Since whole-tree harvesting removes nutrient-rich branches that would otherwise remain on site to decompose, wouldn’t this lead to soils that were less fertile?  And over time, wouldn’t this lead to a decreased ability of the forest to support vigorous tree growth?  This is a major concern to foresters, whose job is to sustainably manage forestland.  Studies by others over the past few decades have examined the soils to look for nutrient depletion, but have found mixed results.

For the research, I measured the natural regeneration in clear-cuts that had been whole-tree or conventionally harvested 10-15 years prior.  These young forests were thick with fast-growing trees about 15 feet tall and an inch or two in diameter.  Over the course of two summers, almost 7,000 individual trees were measured.  As opposed to studies by others which measured soil nutrient content, this study measured tree growth and composition directly.

Measuring a tree in a 12-year-old clearcut.

So what were the results?  This recently published paper reports that the tree species that grew following whole-tree harvesting were not statistically different from those that grew following conventional harvesting.  An earlier paper based on the same research showed no difference in the tree heights or diameters.  In other words, the young forests that naturally regenerated following the two different harvest methods were fundamentally the same.  There was no discernable difference.

There are many caveats to every scientific study, and this one is no exception.  The first and foremost is that these are short-term results after a single whole-tree harvest.  This study didn’t look at long-term impacts to tree growth or composition after repeated whole-tree harvesting.  The second caveat is that this study only focused on a certain type of harvesting (small clear-cuts) in a specific forest type (northern hardwoods) within a limited geographic area (north-central NH and western Maine).

This study suggests that a single whole-tree harvest has no observable impact to these types of young regenerating stands, but does not rule out the possibility of long-term effects.  Many other studies have examined this question from different angles and have found mixed results.  Some find cause for concern from whole-tree harvesting and others find none.

The Forest Society practices and strongly advocates for the wise use of forestland.  Staying current with the latest scientific research is an important way that foresters know what’s wise.

If you’re interested in learning more about whole-tree harvesting, the full text of the article can be found here.

Gabe Roxby began working for the Forest Society in 2012 after graduating from UNH with an M.S. in Natural Resources and a focus in Forestry.  He previously worked for the Student Conservation Association building and maintaining trails in Massachusetts and educating elementary school students about the joys of science.  Gabe’s undergraduate degree is in Astronomy and Physics, but a summer job working for the National Park Service in Yosemite National Park convinced him to pursue a career in which he gets to spend time in the great outdoors. He can be contacted at groxby@forestsociety.org