Field forester Gabe Roxby writes about a day in the woods looking for female ash trees, as a part of a project aimed at giving the species a better chance at surviving an emerald ash borer invasion.
Gabe Roxby
Forestry
Working Forests
Invasives and Pests 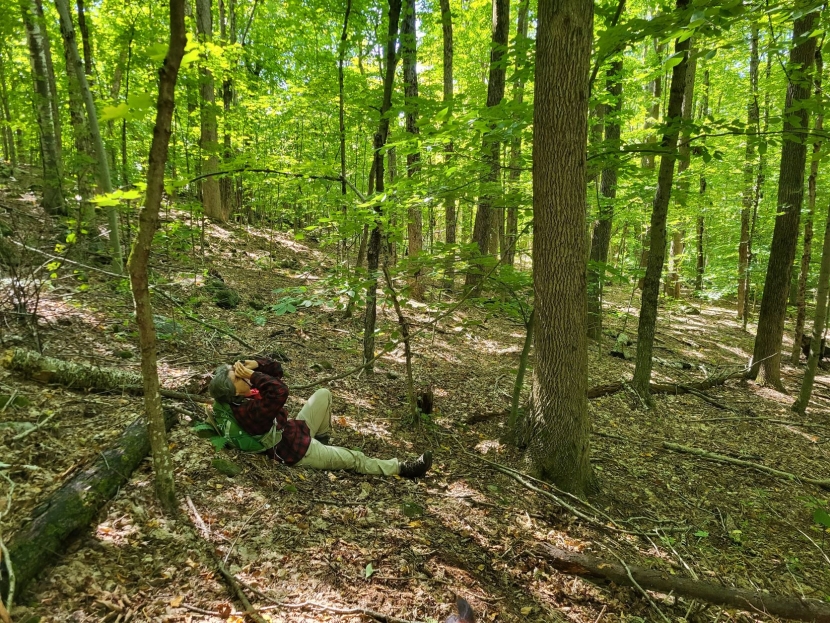 On a beautiful Friday in mid-September, five of us, armed with binoculars and flagging, set off in a line across the lower flanks of Mount Monadnock at the Forest Society's Monadnock Reservation. Our goal was to find female ash trees and flag them in one of our most spectacular stands of white ash — a stand that has not yet been impacted by the emerald ash borer, an invasive insect which will likely arrive here in the next few years. It was slow going, our necks were starting to hurt, and at least one of us (me) hadn’t found a single female ash tree yet. Morale was dipping. 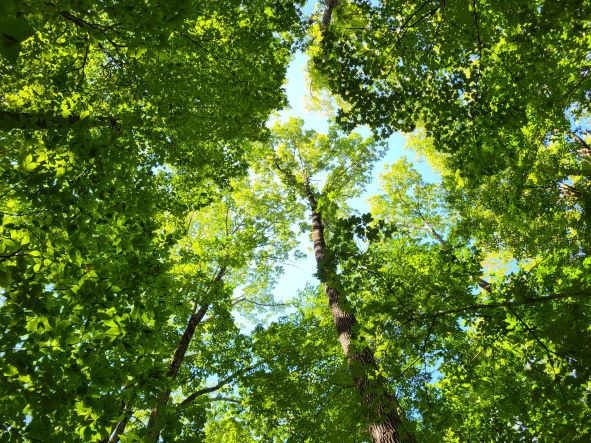 Crown of an ash tree. The seeds are way up there! (Photo: Sarah Thorne)

To understand what prompted this initially-fruitless search for female ash trees, we need to understand more about the plight of ash in our forests. The emerald ash borer (EAB) is an invasive forest pest that has been decimating native ash tree populations across North America since it was first detected in Michigan in 2002. The first sighting in New Hampshire was in 2013, and since that time this invasive insect has spread rapidly to nine of the state’s 10 counties. At the moment, there is little chance that we can prevent the near-complete loss of all of our mature ash trees (Fraxinus spp.) in our forests. More information about ash, why it is an important species, and some of the research currently underway to learn more about emerald ash borer, can be found in this recent Forest Notes article.

Currently, the best hope to retain ash on our landscape is through the introduction and establishment of biocontrol insects. The hope is that these introduced insects, which parasitize emerald ash borer eggs and larvae, will control EAB populations so that they can co-exist with ash, similar to the way many of our native borer beetles behave. However, EAB has a head start, and the biocontrol insects do not have much chance of stopping the initial killing front of EAB before most of our large ash trees are wiped out.

This all sounds pretty bleak, but there is a glimmer of hope. EAB does not seem to kill seedling and sapling-sized ash trees, which provides an opportunity for foresters to manage ash stands in a way that may help retain ash on our landscape. The thinking is that if we can establish young ash trees in the understory of our forests, they will be able to survive the initial wave of EAB, which will kill almost all the mature ash trees. 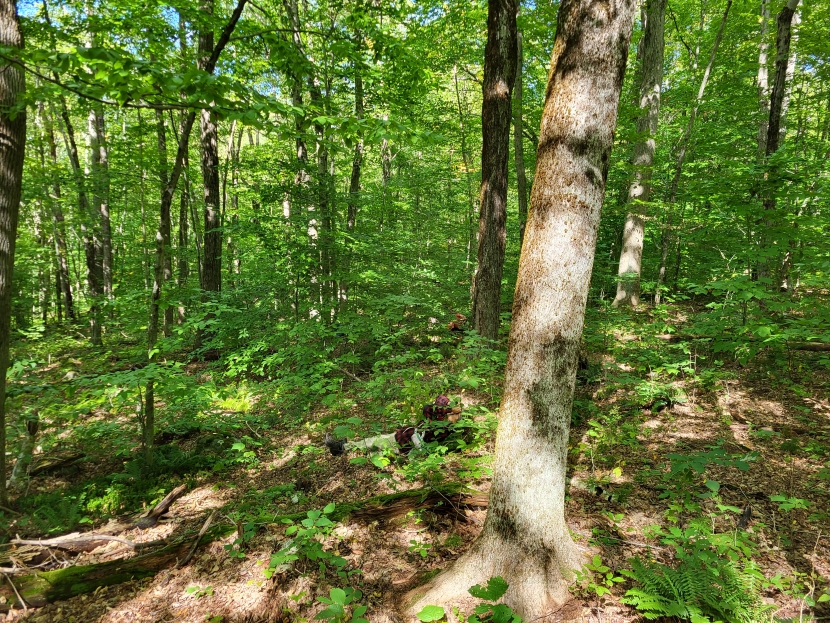 Can you spot three ash seed searchers on the ground looking up into the canopy?

As these young ash trees grow up, it is possible that the biocontrol insects that are being released now will have had time to become better established, and may afford some protection as the ash trees grow larger. Additionally, if there is some genetic resistance in some ash trees to EAB, stands with thousands of small ash are more likely to contain a tree sapling with this resistance than a stand with only a dozen large ash trees. More ash trees per acre gives us a greater chance that one of those trees might contain something important in its genetics that could help us retains ash in our forests. 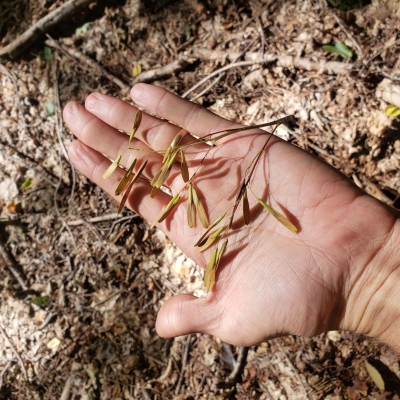 In the next few years, we are hoping to implement a timber harvest on one of our best ash stands on Mount Monadnock, with the goal of regenerating a blanket of white ash seedlings. Since a single ash tree is either a male or a female (in some tree species this isn’t the case and a tree may have both male and female parts), it will be important to make sure we leave some of each uncut during the harvest, to provide the species an opportunity to pollinate and set viable seed. This is the reason for the binoculars and the cricks in our necks.

Females are quite a bit less common than males, and some estimates put the ratio at only one female tree for every 7 male trees.  During our harvest, we want to make sure we leave enough female trees so that we provide the opportunity for ash to regenerate.

But how do you tell if an ash tree is male or female?  Well, it can be pretty difficult during some years, because on average, female ash trees only produce large amounts of seeds every three years. The fall of 2022 has been an excellent seed year for white ash across our region, and this is the reason we were out flagging female ash trees.

Our initial strategy was to just walk in a line and look at the crowns of each ash tree we saw to see if there were any seeds. This was brutally slow, and it was fairly difficult to see the seeds up in the crowns of these impressively tall trees, especially with the leaves of other nearby trees obscuring the view.

After about an hour, we settled on a much better strategy. Walk right up to each ash tree, and do a quick survey around the base of the tree for ash seeds that have fallen. If you find any ash seeds, then back up and lay down on your back and search that particular tree for seeds in the canopy.

It turns out, at this time of the year at least, many of the ash seeds don’t fall far from the tree, and so this method allowed us to refine our search and focus our binocular searching in trees most likely to have seeds. 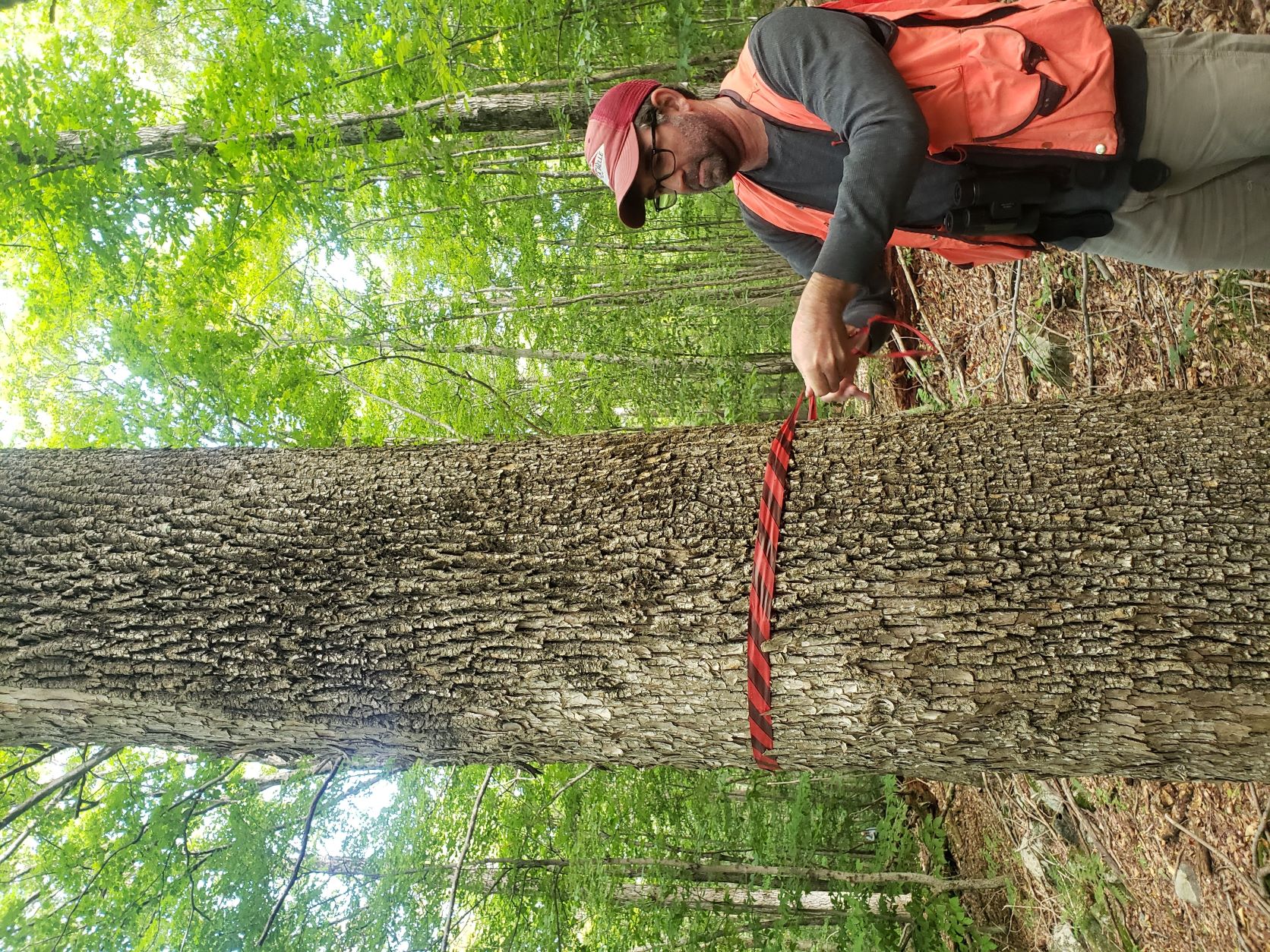 The strategy of laying down on our backs and looking straight up saved us from neck injury (and provided a nice couple seconds of rest!). We lucked out in timing this field day, as ash seeds were both on the ground and in the tree. A month earlier or a month later would likely have make this task more difficult.

With the knowledge of where the female ash trees are in this stand, we can make better choices on which trees to leave uncut during the harvest. We still have more to figure out on the timing of the harvest, and the pattern and density of the trees we will leave uncut, but this felt like a good first step.

Stay tuned in the years to come to hear more about this ash-focused harvest!