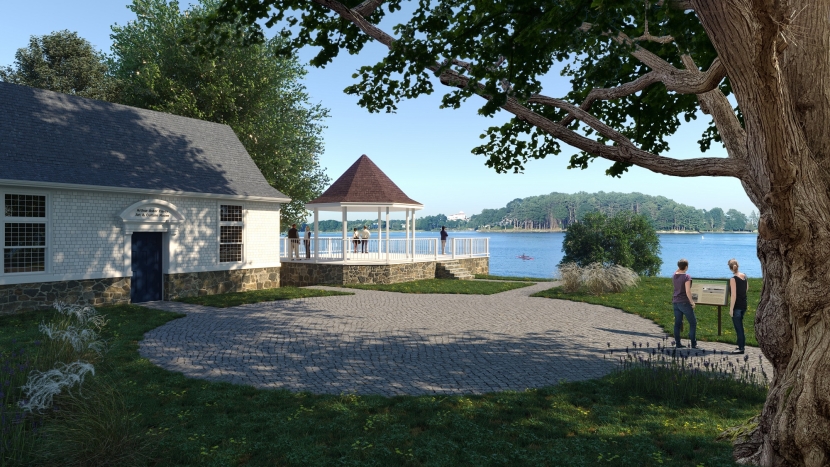 A restored Music Room at Creek Farm could host small educational events and gatherings with public restrooms in the former Kitchen Yard portion of Carey Cottage. The courtyard, looking out over Sagamore Creek, would be open to the public.

Since acquiring the 35-acre property known as Creek Farm in 2000, the Society for the Protection of New Hampshire Forests (Forest Society) has worked to implement donor Lillian (“Billie”) Noel’s vision to have Creek Farm “maintained in an undeveloped state except as necessary for providing access and facilities for the use of this property by the citizens of the City of Portsmouth and the State of New Hampshire for their use and enjoyment.”

To that end, the Forest Society has added walking trails and signage, upgraded parking, established a kayak/SUP launch, partnered with the Gundalow Company to host summer camps for children, partnered with the Center for Wildlife and other groups to offer programming, and welcomed local residents and visitors to come explore the property. A Creek Farm Educational Coordinator hired by the Forest Society is on site during the summer coordinating programs. 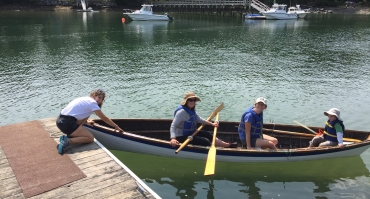 More challenging has been finding a suitable tenant for Carey Cottage, a sizeable building on the property built by Arthur Astor Carey in the late 19th century. When the Forest Society acquired Creek Farm, the deed specifically required demolition of the building. In deference to historic preservation interests, Noel allowed the Carey Cottage to stand under certain conditions, and assigned a Trustee to oversee the Forest Society’s consideration of potential uses and lessees of the building.

In 2006, Cornell University leased Carey Cottage for use by the Shoals Marine Lab for educational purposes. However, citing changes in that program, Cornell gave notice in January 2014 and vacated the premises in the fall of 2016. 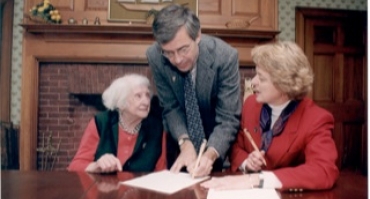 Lillian Noel (left) at the closing with Jamey French and Jane Difley in 2000.
Since 2014, the Forest Society has actively been searching for a new partner for Carey Cottage at Creek Farm, working with multiple Realtors to market the property and solicit proposals to restore the building and make use of it compatible with the donor’s intent. The organization was close to signing leases on two different occasions, with financial backers withdrawing support at the last minute. With no lease partner in sight, the Forest Society is looking at the future of Carey Cottage and the Creek Farm Reservation.

“Following five years of searching, extensive negotiations with two different potential lessees, we do not see any light at the end of that tunnel,” said Jane Difley, president/forester of the Forest Society. “As a result, we are actively looking at our other options, one of which could be restoring the Music Room to use for programming, adding public restrooms, and fulfilling Billie Noel’s vision by making the entire property open to the public.”

The Music Room was built in 1892 after Arthur Astor Carey took up the cello, and features carved linen-fold interior paneling, exposed beams, and large central fireplace. As a programming space it could seat approximately 35 people, with parking available in the adjacent lot. 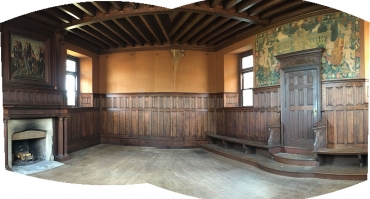 Restoring the Music Room would come at a cost estimate of approximately $750,000, which would need to be raised in the local community. Early conversations among some donors have suggested there is interest in pursuing that option.

The Forest Society is working with Portsmouth architect Brian Murphy of Manypenny Murphy Architecture and a structural engineer to determine the feasibility of renovating the Music Room while removing the main part of the Carey Cottage. The original Kitchen Yard could then serve as a small office space for support of educational programs including the Gundalow Company’s summer camp, as well as public restrooms. The public courtyard space could include interpretation of the site through history, including when it was a part of the Benning Wentworth estate, the purchase of the property in the late 19th century by Arthur Astor Carey, and the site’s role in the 1905 Portsmouth Peace Treaty.

“We are actively talking with potential donors about the Music Room renovation,” said Jack Savage, vice president of communications/outreach. “While some of those conversations are encouraging, we have a long way to go.”

Savage acknowledged that there are also stakeholders who continue to hold out hope that the entire Carey Cottage structure could somehow be saved.

“We understand the sentiment, but at this point I think we have to acknowledge that the likelihood of finding someone willing to contribute $3-4 million for a use consistent with the intent of the donor is very low,” Savage said. “After nearly 20 years of ownership of Creek Farm, our board of trustees has concluded that it’s time to move forward.”