Although it is difficult to see with the shadows, the brush fire came quite close to the entrance sign at Webster Wildlife & Natural Area. (Photo: Dale Wisler) 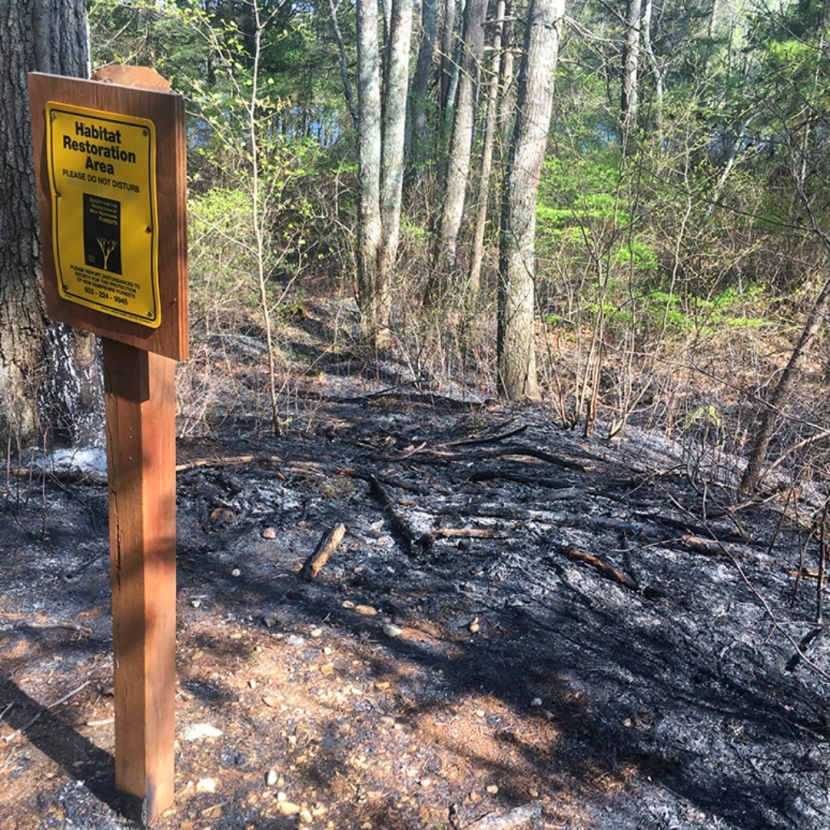 It looks like the fire burned hottest here and could have started by a brush pile near this sign. (Photo: Dale Wisler)
The fire took place near the parking lot, mostly along both sides of a now-unused side trail that used to access Cedar Swamp pond. The cause of the fire is still unknown.

Thanks to our volunteer land steward, Dale Wisler, for sharing his report and photos.

With larger fires capturing the headlines recently — including the Bemis Fire in Crawford Notch, which had scorched over 175 acres as of May 16, including part of the Appalachian Trail — it's easy overlook the many other wildfires across the state during times of fire danger like this spring.  (See updates on the AT conditions from the Appalachian Mountain Club here.) That's why it's important to practice fire safety wherever you travel outdoors! Remember that campfires are not allowed at Forest Society properties and fireworks are prohibited.

Fires at Other Forest Society Reservations

Did you know that other Forest Society reservations have been damaged by wildfires in the past? In 2018, a fire at Lost River Reservation caused the early closure of the Lost River Gorge & Boulder Caves attraction, and burned 75 acres.

As Dave Anderson reported, "The fire started on October 3 and burned for five weeks until it was officially declared out. The Dilly Cliff fire consumed 75 acres of steep terrain located on the White Mountain National Forest and on the Forest Society’s Lost River Gorge. After a flare-up of hot spots on October 17, the wind-driven heavy rain on the pre-Halloween weekend dampened the blaze for good. Soon after, snow returned to Kinsman Notch. Lost River Gorge had closed one week early to ensure public safety and provide a staging area during successful efforts to contain a fire burning on near-vertical terrain."