Wake of the Fire 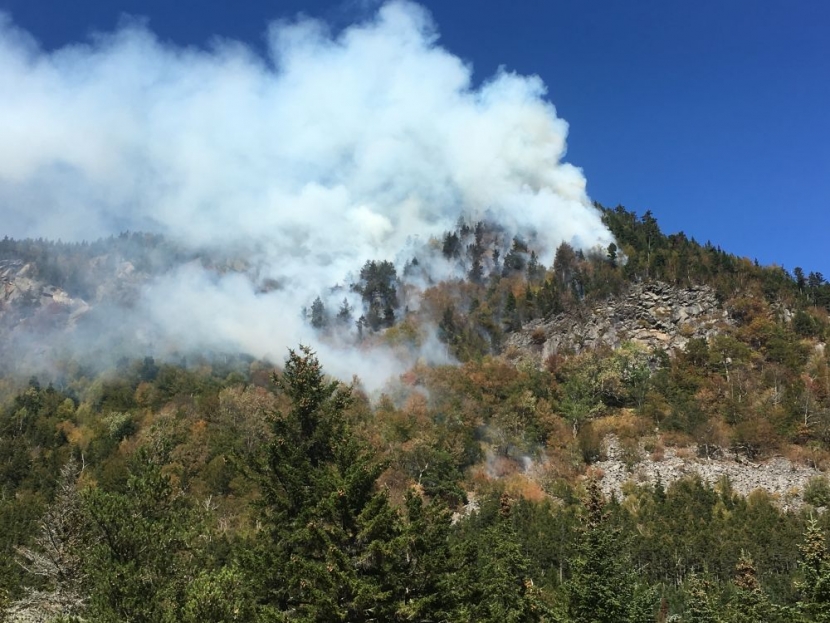 Spring arrives late in the mountains. Lost River is located in a particularly cold pocket: rugged Kinsman Notch. The jumbled boulder caves are famed for a subterranean river – the “Lost River” - whose rushing waters disappear and reemerge in a spectacular natural gorge. Kinsman Notch was originally formed by a glacier that seems poised to return each year in late autumn. In summer, the natural air conditioning and natural beauty of Lost River has attracted generations of explorers for more than a century to this cool natural oasis during hot weather. 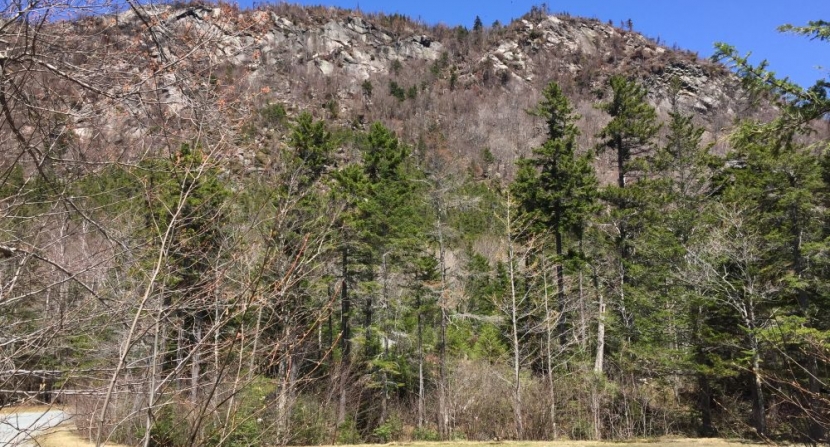 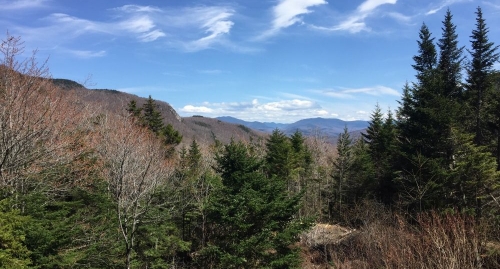 Things got really HOT last October with just a week to go before the busy Columbus Day weekend and fall foliage tourism peak. Lost River was forced to close early. It’s almost hard to recall after the long winter that a raging forest fire had scorched the steep ledges of the Dilly Cliff overlooking Kinsman Notch and Lost River Reservation in North Woodstock.

The fire started on October 3 and burned for five weeks until it was officially declared out. The Dilly Cliff fire consumed 75 acres of steep terrain located on the White Mountain National Forest and on the Forest Society’s Lost River Gorge. After a flare-up of hot spots on October 17, the wind-driven heavy rain on the pre-Halloween weekend dampened the blaze for good. Soon after, snow returned to Kinsman Notch. Lost River Gorge had closed one week early to ensure public safety and provide a staging area during successful efforts to contain a fire burning on near-vertical terrain. 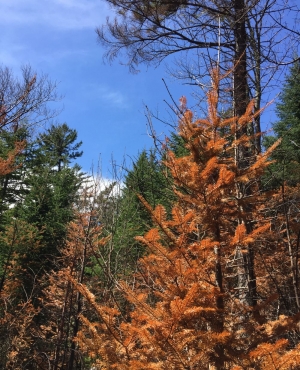 The firefighting effort was as spectacular as the fire itself. In addition to federal and state resources from the US Forest Service and NH Division of Forests and Lands, more than 29 agencies including 19 municipal fire departments from both NH and Vermont fought the fire alongside the NH Division of Forests & Lands Forest Rangers, Patrols & Special Deputy Forest Fire Wardens, the WMNF Fire Fighters and Law Enforcement, JBI Helicopter Service, a NH National Guard helicopter, the NH Homeland Security and Emergency Management Civil Air Patrol, the Grafton County Sheriff's Department and the Woodstock Police Department. The first week of the fire required 355 firefighters on the ground with helicopters overhead dropping water scooped from the Beaver Pond at the foot of the Beaver Brook cascades. 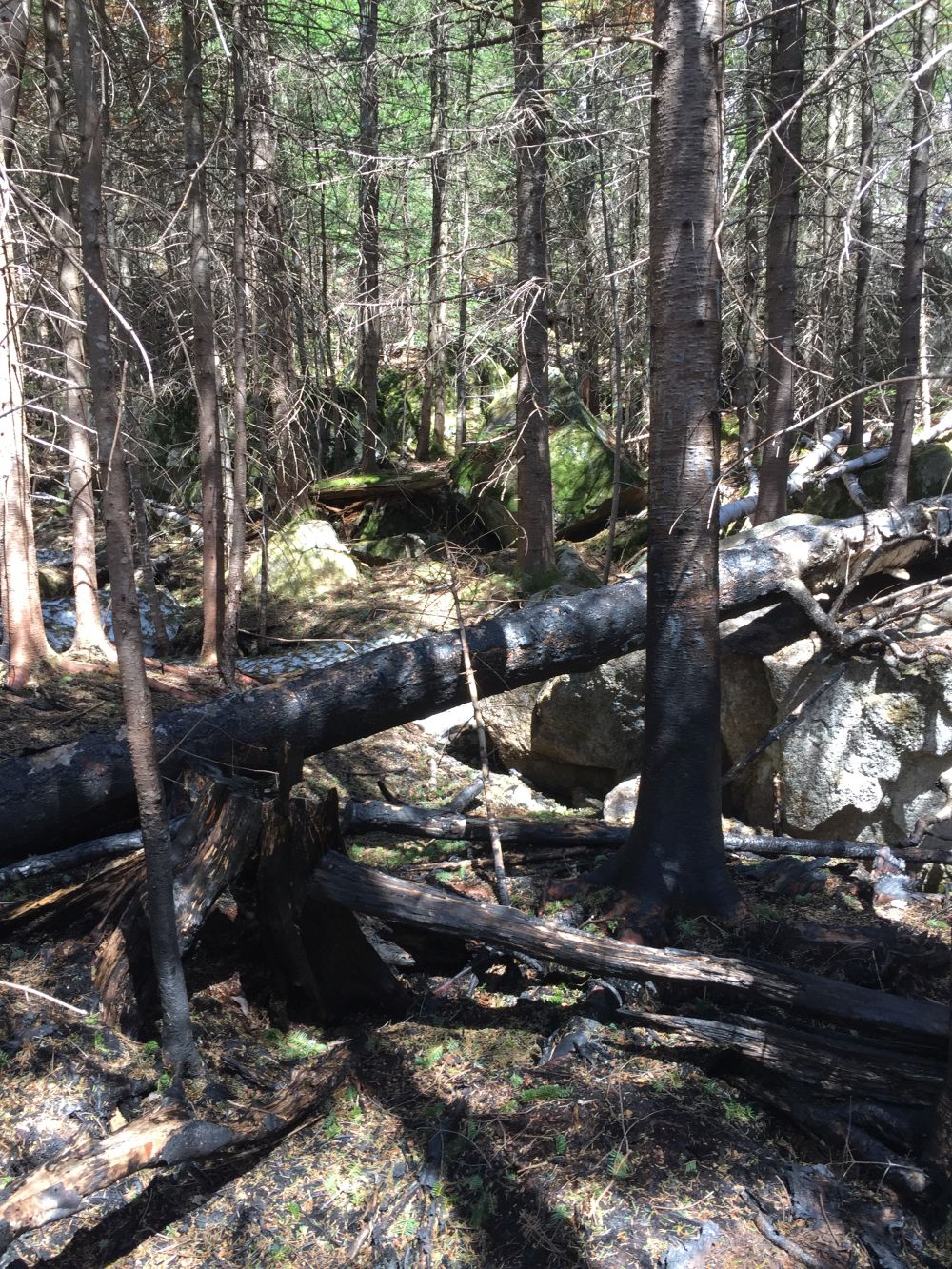 NH State Forester, Brad Simpkins says that after October 8, State, federal and Woodstock fire personnel remained in smaller numbers on fire mop-up duty while monitoring hot spots until November 7th when the fire was finally fully extinguished. While there have been larger fires in the past decade, none have burned for as long as the Dilly Cliff fire due to the steep terrain and inaccessible recesses of cliff and slopes of loose talus- boulders and loose rock.

Six months later, colorful migrant songbirds are returning to forests surrounding the burned area. Warblers sing from the canopy of dark spruce trees mixed among the northern hardwoods: yellow birch, beech and red maple on the valley floor. At the foot of the cliffs, heat-scorched needles of balsam fir trees glow rust-red in the understory where the firefighters lit a controlled “burnout” to clear the thick understory and keep the fire from moving down slope toward the buildings, bridges, boardwalks and staircases at Lost River. It worked: the fire and aftermath had no direct impact on the facilities and attractions.

The former Dilly Cliff Trail is permanently closed. Forest Society staff and volunteers recently closed the trailhead. The trail had always been steep but the fire has rendered it unsafe due to unstable footing and the potential for loose rock tumbling from the steep, burned-over cliffs. The best view of the cliffs is seen from Lost River and the parking lot which is now open for the season.

The perimeter loop trail, the Kinsman Notch Ecology Trail is open during daylight hours. The Forest Society is working to create a new map and sign for the trailhead kiosk including information about the October fire. 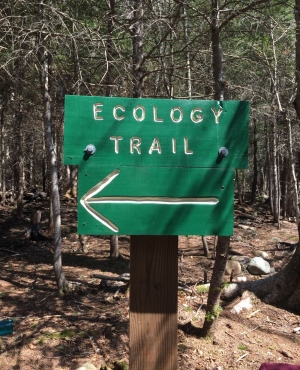 The forest will recover starting with lush spring growth in areas with increased sunlight. The spruce trees growing beneath the cliffs remain green but their trunks are charred. Other evidence of the fire includes heat-scalded needles of the conifers: balsam fir and spruce. The hardwoods may fare slightly worse depending on heat damage to their thin bark. The bark of northern hardwood trees is not well-adapted to fire, even a fast moving ground fire intentionally set as a burnout. Charred trunks of yellow birch, beech and maple evidence more damage than would the thick corky bark of more fire-adapted trees in southern NH: pine and oak which do not grow in the higher elevations and northern latitudes. Forests in the interior of the White Mountains are an environment where fire is exceedingly rare, particularly a crown fire with flames burning into the tops of the forest canopy. The forest is resilient and recovery will proceed rapidly such that in a few years, evidence of the fire will be hard to recognize.

Kate Wetherell is manager of Lost River for White Mountains Attractions.  As she and the staff prepared for opening day on Friday May 11, the fire is history. “We're super psyched to be reopening, especially after the season was cut short last October. We just want to emphasize to visitors that Spring arrives rather stubbornly in Kinsman Notch. Waterfalls are rushing and the river is running high with the recent snow melt and rainfall. Visitors can expect to see snow along the river and ice filled boulder caves. It is nice to see vegetation starting to turn green again.”