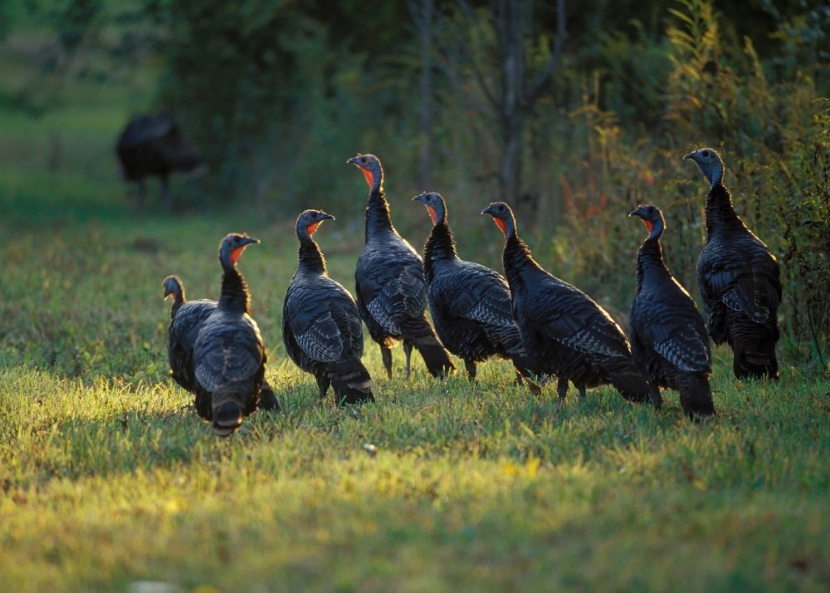 After breeding, male Toms are hunted while females hens lay eggs and then tend broods of poults. (Photo: Henry Zeman)

*This post is one of the Forest Society's most popular- ever! We would appreciate your donation to support our continued efforts to advance land conservation, education, advocacy and forestry and recreation across the state and beyond. Want more "Something Wild" episodes (we love Dave Anderson too!)? See here.*

Why must talking turkey always be the topic du jour only in November?

Talk of turkey is usually relegated to the month of November when we stuff ourselves with eating yams and cranberry jelly, and watch college football. And the misperception that Ben Franklin had once proposed the wild turkey as our national bird, is usually not far behind. 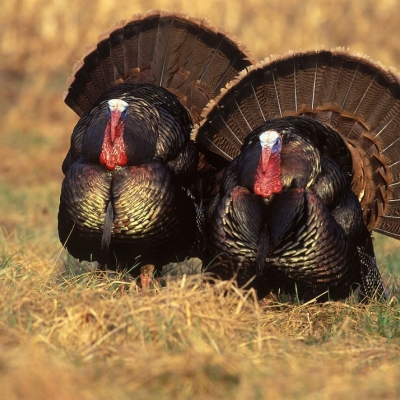 But the fact remains, unless you hunt turkey, you probably don’t think about them as much in the springtime. But this is a crucial time of year for New Hampshire’s 40,000 turkeys. After mating in April and incubating eggs in May, turkeys are now hatching chicks and rearing broods of young poults in June.

A turkey hen lays one clutch of eggs per year, these clutches can as small as four to as large as 17 eggs per nest (that's a big clutch and that's cool fact #1)! The hen lays only one egg each day, so if she lays 14 eggs it takes two full weeks to lay the entire clutch. So even though egg 14 arrived two weeks after egg number one, they will all hatch at the same time, often within an hour of one another; it’s called “synchronous hatching” (cool fact #2)!

The hen doesn’t incubate the eggs (sitting on them to keep them warm) until she’s laid them all. Hens travel in a females-only flock, but they become more solitary and secretive in May when it comes to nesting. She’ll hang out with the flock and feed until she needs to lay an egg. Then she might hop over a nearby stone wall or move to some such remote place where she’s hidden her clutch on the ground. She lays the next egg, then gets up and returns to the flock. 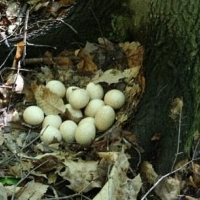 But they keep a close eye on their nest. If someone or something gets too close, the hen will make an alarm call and make a big display of fleeing, this draws the intruder’s attention away from the location of the nest. So cold eggs in a turkey ground nest are uncovered and unheated. But unlike un-fertilized chicken eggs in your fridge, the embryos in these eggs will begin to develop once the hen starts incubating them. And four weeks later the eggs hatch. 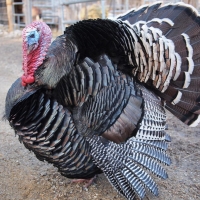 But what walks out of those eggs aren’t chicks. Newly hatched turkeys are called poults, and here’s the difference. “Chicks” are hatchlings that are not yet mobile. Most birds, like songbirds and raptors, nest in trees. When their eggs hatch, the chicks are “altricial.” They are featherless and blind, squawking for food and warmth.

Poults, on the other hand are “precocial,” ready to run (cool fact #3). Turkeys and other ground nesters hatch-out with fuzzy feathers, open eyes and they soon can run. This is useful because turkey flocks often cover a lot of ground in a day while foraging, and the poults have to keep up with mother hen as she leads them thorough her territory in search of food and while avoiding predators.

Where are all the male turkeys during all of this? After the mating season, “Toms” and younger “Jakes” retreat to a separate males-only flock, wandering around separate from the hens. By late summer females with fully grown poults feed in open fields on crickets, grasshoppers, ticks and weed seeds.

In autumn during acorn and beechnut crop years, mixed flocks of males and females combine while feeding in forests as they fatten for the winter months.  In winter, flocks roost in tall white pines or in dense hemlocks and fly down to scratch in snow to reach buried seeds or visit backyard birdfeeders. By late March, Toms begin to strut and gobble to attract female hens once more.