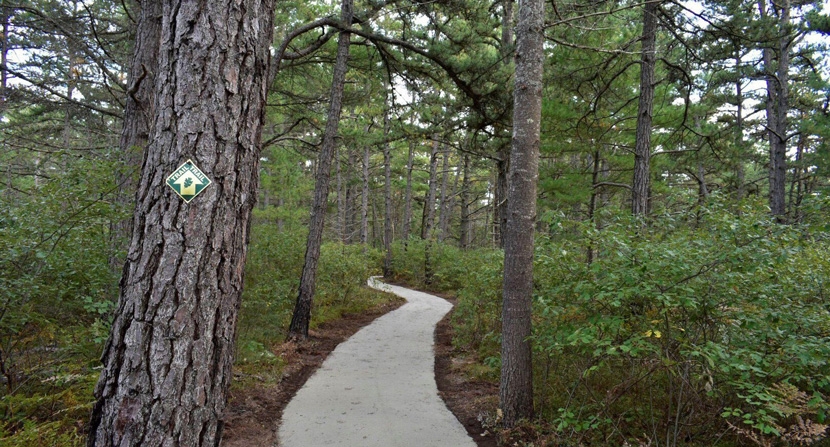 The diversity of New Hampshire’s habitats is staggering, as we’ve mentioned in the past there are more than 200 natural communities within our borders. This week, in another edition of New Hampshire’s Wild Neighborhoods Something Wild, again visits a rare habitat type.

We’re going to visit the pitch pine scrub oak woodland, more commonly referred to as “pine barrens.” There are a few examples of this habitat in New Hampshire, but globally it’s pretty rare, too. To understand why pine barrens are so rare in the northeast we need to talk for a moment about forest succession.

The default landscape in New England in general and in New Hampshire, specifically is forest. If you left your back yard, you’d have a forest before your lawn mower could rust out. And there is a well-established succession of tree species that our forests follow. You can actually tell how old a forest is by what types of trees you see. Pine barrens one of many forest types that are often in turn succeeded by taller trees. Geddy Lee was right, there is unrest in the forest…those taller trees hog all the sunlight, and the shorter pitch pines and scrub oaks that make up barrens, die off.

One reason pine barrens have managed to survive is because they thrive on disturbance, particularly fire. As Jason Mazurowsky, a field naturalist at the University of Vermont explains, “they’re not only fire-adapted, they’re fire dependent.” So the pitch pine is classified as a semi-serotinous species. “Serotiny is a term that refers to a cone that can only be opened by fire. Only heat will cause that cone to open up and release the seeds within.”

As long as a wildfire is low to the ground, it will feed on the underbrush comprised of competing vegetation like white pines that would otherwise outgrow the pitch pines. Additionally, the fire leaves behind lovely mineral rich soil that is the perfect nursery for pitch pine seeds.

Pitch pine is one of a number of fire-tolerant plants that make their home in barrens. Another strategy used by species, like the scrub oak, to survive fire is to store a large amount of resources in their root system. That way when a fire incinerates the exposed plant, the stores in the roots can quickly regenerate the plant.

And there are many insects that only feed on vegetation found in this wild neighborhood. “We know there’s an unusually high amount of endangered moths and butterflies in the pine barrens,” says Mazurowski, “and they’re feeding on scrub oak and blueberry.” Insects like our state butterfly – and the nationally endangered – Karner Blue, as well as the Phyllira Tiger Moth.

The combination of these insects, dry sandy soil for ground nesting, and scrub for cover adds up to a perfect location for certain aerial insectivores, like whippoorwills and nighthawks. It’s uncommon to find whippoorwills and nighthawks at all, but it’s even more unusual to find them together. Mazurowski was doing some research at New Hampshire’s own Ossippee Pine Barrens (the state’s largest) and captured a truly rare recording.

It was night, and the moon was full, “and whippoorwills are tied to the lunar cycle. So if it’s a full moon they will call all night long.” Amidst this chorus of whippoorwill calls, “I had two nighthawk males diving. And when they dive through the air they turn at the last minute, just before they hit the ground and do this upward inflection and air rushes through their feathers and makes this booming noise.”

Listen to the Something Wild feature here at NHPR