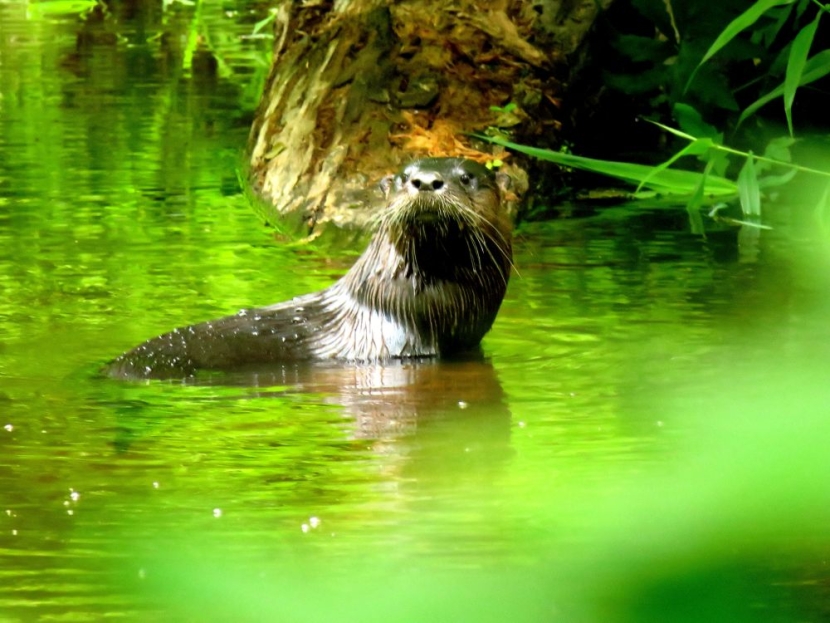 An otter on the river. (Photo: Ellen Kenny)

"Something Wild" is joint production of NH Audubon, The Society for the Protection of New Hampshire Forests & NHPR. We recommend listening to it in its original format on NHPR(link is external) but a transcript of the show is also below.

River otters live in ponds, streams and wetlands, and also in tidal salt marshes. They are more than 4 feet long and can weigh up to 25 pounds. They are streamlined with dense brown fur that’s water-resistant – which is handy, since they spend a lot of time in the water, in all four seasons!

They use their large, webbed back feet when they swim, and their dexterous front feet to handle food. And all four feet come equipped with five sharp claws.

Young otters play together – chasing, rolling, wrestling, grabbing – to learn how to be good hunters and to establish their social status.

“I once watched an otter family on top of the ice on the Lane River, playing pond hockey using a frozen perch as the puck – uncanny. And they were obviously having fun!,” says Dave Anderson of the Forest Society.

They begin life tiny, eyes closed and naked, as many as six wiggly “pups” weighing just 5 ounces at birth in early March. The female creates a cozy den in an abandoned beaver lodge or under an overhanging riverbank beneath tree roots — never far from water — where she’ll nurse the pups for weeks.

The male otter isn’t welcome at this stage. Males sometimes travel together in small groups and they aren’t especially territorial.

The female otters raise the offspring within a core home range that includes that natal den. Vulnerable pups don’t venture far from a den for the first few months. But by June, pups are swimming and learning to catch minnows, frogs and crayfish.

An otter clan may use 25 miles of river shoreline and can cross a small stream valley or lake in a short time. 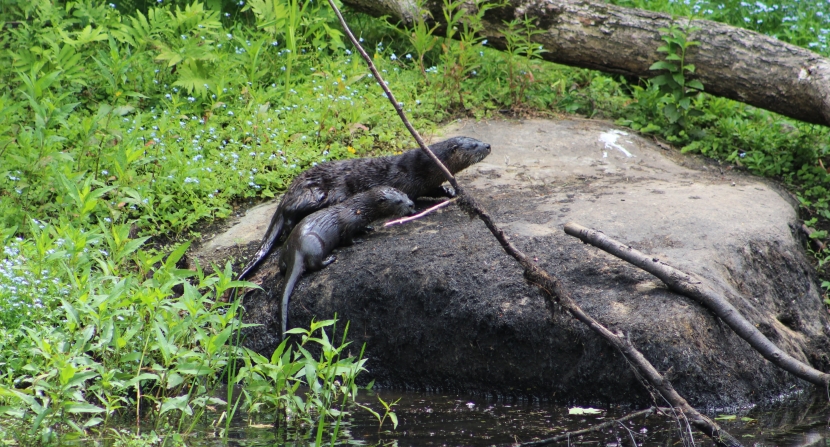 Otters at the Forest Society's Clay Brook Forest. (Photo: James Kibler)
You don’t see otters very often in the warmer months. They spend much of their time underwater, and they’re also concealed by leafy vegetation, and they are somewhat nocturnal.

It’s in winter, when ice forms on ponds and along rivers’ edges, that they suddenly become visible. They scoot and slide along on their bellies, leaving trails in the snow that look like mini-toboggan runs.

Their long whiskers are highly sensitive to water movement. Below the surface, this helps otters pinpoint prey in dim light at night and under snow-covered ice. They can stay submerged for up to 8 minutes.

Like bald eagles, otters reside at the top of the aquatic food web. They have few natural enemies. But just like eagles, they’re vulnerable to increasing toxins of mercury, lead and PCBs as you move up the food web.

The presence of otters is an excellent indicator of good water quality in a healthy, intact aquatic ecosystem.

Otters may enjoy watching people as much as we like watching them! They are reported to be curious about folks swimming, kayaking or paddle boarding on ponds. Sometimes their heads barely break the surface, nose, eyes, and ears on alert, barely visible. Other times, they pop right up out of the water, like a furry periscope.

Take a walk around a river, pond or salt marsh and see if you can spot an otter.

Thanks to Brett Thelen of the Harris Center for Conservation Education for sharing her otter enthusiasm and videos of river otters she’s observed in Hancock N.H.

Something Wild is a joint production of New Hampshire Audubon, the Forest Society and NHPR and is produced by the team at Outside/In.