Something Wild: A resolution to go owling in the New Year 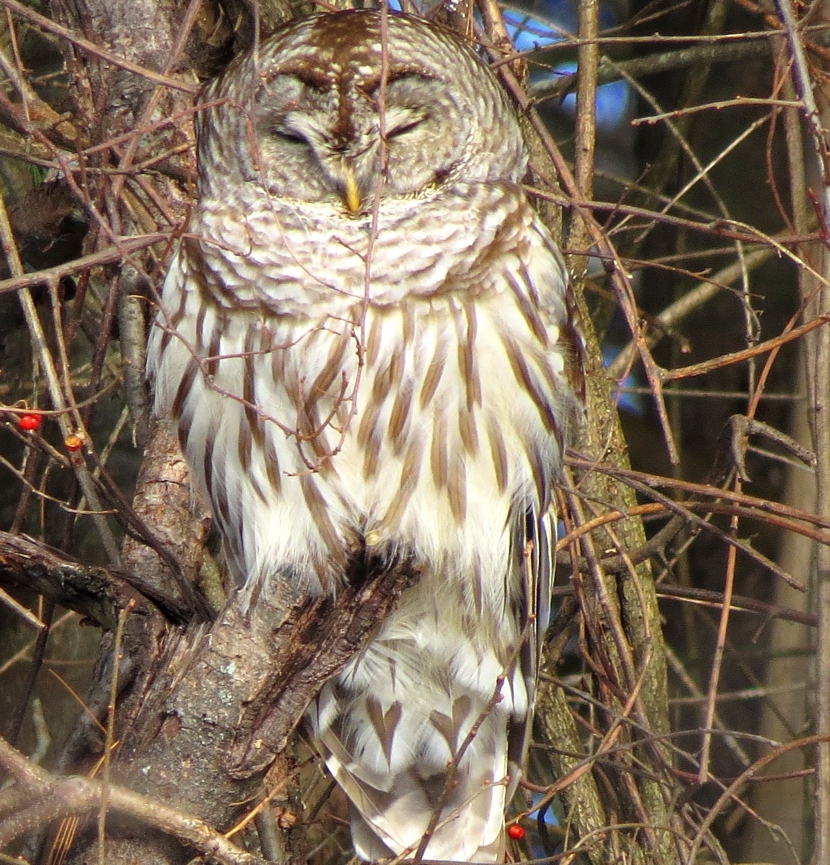 "Something Wild" is joint production of NH Audubon, The Society for the Protection of New Hampshire Forests & NHPR. We recommend listening to it in its original format via NHPR but a transcript of the show is also below. (Originally aired Dec. 31, 2021)

In the new year, resolve to get outside, be still, listen and observe. And revisit Jane Yolen's Owl Moon for inspiration to go owling.

The natural world doesn’t observe New Year's Eve. Nature’s seasonal calendar is circular and ever-turning, not linear. For wild creatures, December 31 is not the end, nor is January 1 the beginning. But the date does serve as an opportunity to remind ourselves to get outside, be still, listen, and observe.

We take inspiration from Jane Yolen's classic children's story, Owl Moon, to learn about New Hampshire's most common owl species, the barred owl, and how you can go owling. In Owl Moon, a girl describes how she walked with her father late at night in winter to search for an owl. 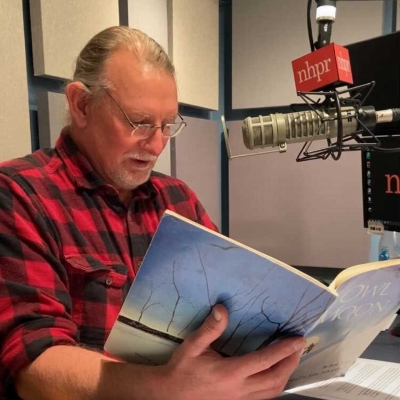 Dave Anderson reads a well-worn copy of "Owl Moon," by Jane Yolen. (Courtesy of NHPR)
The story’s narrator is correct when she observes that owls are easier to hear than they are to see. In Owl Moon, they are seeking a great horned owl, a species that also lives in New Hampshire but is harder to find than other kinds of owls.

Barred owls live in damp woods, often not far from where people live. They are tannish-gray in color, with a 4-foot wingspan, and a head-to-tail length of about 20 inches. They only weigh a pound and a half, but they appear larger because of their poofy feathers as well as their flattened facial disk and dark brown eyes that look like two big black marbles.

Barred owls eat a wide variety of prey, including chipmunks, mice, and small birds, which you might expect, but also salamanders, small frogs and even cicadas.

Most owls are crepuscular, active at sunrise and sunset, as well as at night. But you don’t have to go owling at night to see a barred owl. They are often seen during the day, too.

"In a tough winter, one sometimes sits on a branch near my birdfeeder, waiting to catch a junco, or more likely a red squirrel," says Chris Martin of New Hampshire Audubon.

Hearing their call is one of the best ways to know owls are around because it’s very hard to hear them flying.

Owls have special comb-like serrations on their flight feathers that cut through the air without making much noise. Silent flight helps owls surprise their prey, and also lets the owl hear tiny mouse noises during a final approach.

If you do catch sight of one, be sure not to disturb them. Courtship takes place in the winter months for barred owls. Since they are permanent residents in our woods, they begin nesting earlier than most birds.

As early as February, the female lays 2 to 3 eggs in a hardwood tree cavity, usually about 30 feet up, and she incubates them for a month. Young barred owls may remain around the nest area with their parents for up to six months.

This New Year’s, resolve to get outside, be quiet and brave, and go owling. And make time to read Jane Yolen’s Owl Moon to the special kids in your life.

Have a wild New Year!