Something Wild: A rare Siberian eagle camps out in Maine - is it lost or is it exploring? 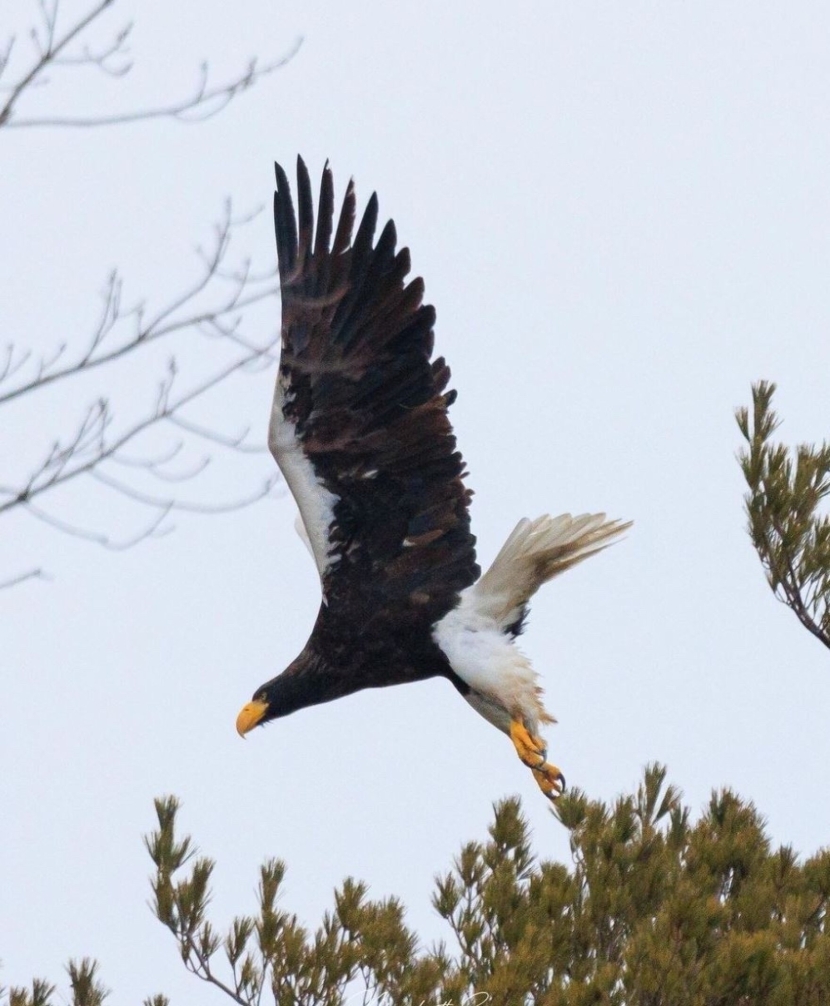 The Steller's sea-eagle in Maine, captured by John Putrino, on Instagram @manbythesea, whose excited voice you can hear on Something Wild as he captures an image of the raptor.

"Something Wild" is joint production of NH Audubon, The Society for the Protection of New Hampshire Forests & NHPR. We recommend listening to it in its original format via NHPR but a transcript of the show is also below. (Originally aired Feb. 25, 2022)

Recently, an ultra-rare Steller’s sea-eagle turned up in New England. The raptor is rare because there are so few, only about 4000 in the world. This bird is literally on the wrong side of the globe; it’s half a world away from where it ought to be in far Eastern Siberia.

The surprise appearance of this massive bird, one of the world’s largest raptors, electrified birders, sending them flocking to midcoast Maine when it was sighted on Dec. 31, 2021 (and to Massachusetts a few weeks earlier). It’s appearance raises some interesting questions about how birds navigate, colonize new areas, and find mates.

With an 8-foot wingspan and weighing in at nearly 20 pounds, the Steller’s sea-eagle makes our bald eagle look puny by comparison. It has distinctive white stripes across the top of its dark brown shoulders, white tail, and an imposing bright orange beak. 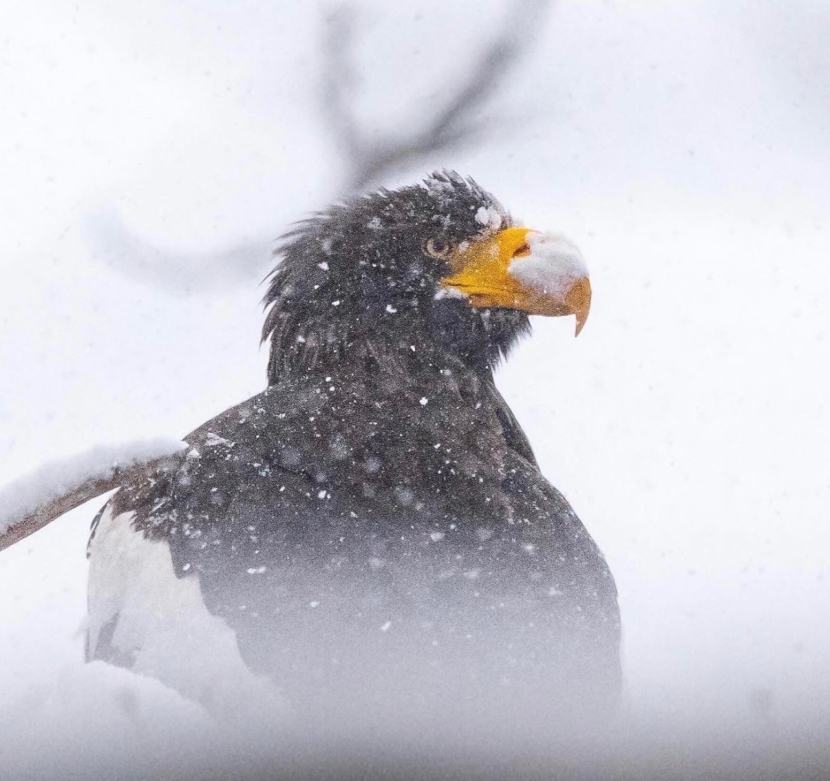 The Steller's sea-eagle is covered in snow and enjoying the weather in Maine. (Photo: @manbythesea)

The Atlantic coast from Maine to Newfoundland is roughly the same latitude as where it came from. So the Maine coast seems like a good choice, with lots of tall trees to perch in to look for the fish it prefers to eat.

What’s really amazing is that this massive raptor worked its way across the continent since it was first identified in Alaska in 2020. A distinctive feather pattern confirms that it is the same bird.

When birds behave like this, wandering far far from home, are they actually lost - or is it exploring?

Some individual birds do hatch with impaired navigational abilities. When it’s time for them to migrate, they set out in odd directions.

And youngsters on their first autumn migration can get pushed around by strong winds and weather systems. Tropical storms tracking northeast from the Gulf Coast can carry many smaller birds hundreds of miles, resulting in a “bird fallout,” when lots of birds suddenly descend in strange locations.

Out-of-place cave swallows and the rufous hummingbirds often show up in late Fall near Hampton and Seabrook. If they’re lucky, they’ll find enough insects to survive on until they can get their bearings and head out again.

But the truth is, most really aren’t hardy enough to cope with harsh New England weather, especially the cold nights, and many die.

The official term for this phenomenon of displaced birds is “vagrants.”

We have many examples of off-course birds. Folks who bird in New Hampshire might recall the painted bunting at a feeder near Conway or the sage thrasher found along a rail trail in Hinsdale, well outside their normal ranges.

But like Tolkien wrote, “not all those who wander are lost.” Some species colonize new places as a result of their wanderings. Around Great Bay, a small colony of nesting Mississippi kites has developed over a decade, presumably from the same individuals returning year after year.

A similar situation in Bear Brook State Park involves a pair of red-headed woodpeckers. Both the kites and the woodpeckers are far outside of their normal breeding range, but have successfully produced young, so their off-beat strategy seems to be paying off.

The striking plumage of the Steller’s sea-eagle tells us it is an adult bird, several years old at least. It’s using its skills and experience to survive. Just imagine if a second sea-eagle of the opposite sex showed up and together they formed a new pair. Would they try to set up a territory and breed half a world away from where they “”should” be?

The odds of that seem pretty slim. But the one in Maine has been hanging out with bald eagles. And they’re actually in the same genus, meaning that they’re pretty closely related.

And this time of year is the start of eagle breeding season. Could it mate with a local bald eagle?

It’s not impossible! Mixed pairs of these two species have been seen nesting together in coastal Alaska. And in 2004 in British Columbia, a unique-looking young eagle with features of both a bald and a Steller’s sea-eagle was documented.

Perhaps the appearance of the Steller's sea-eagle in Maine will help bring awareness to its vulnerability as a species. In the meantime, we get to marvel at it as long as it decides to stay in New England!

Something Wild is a joint production of NH Audubon, the Forest Society and NHPR.