Something Wild: Ouch! What Just Stung Me? 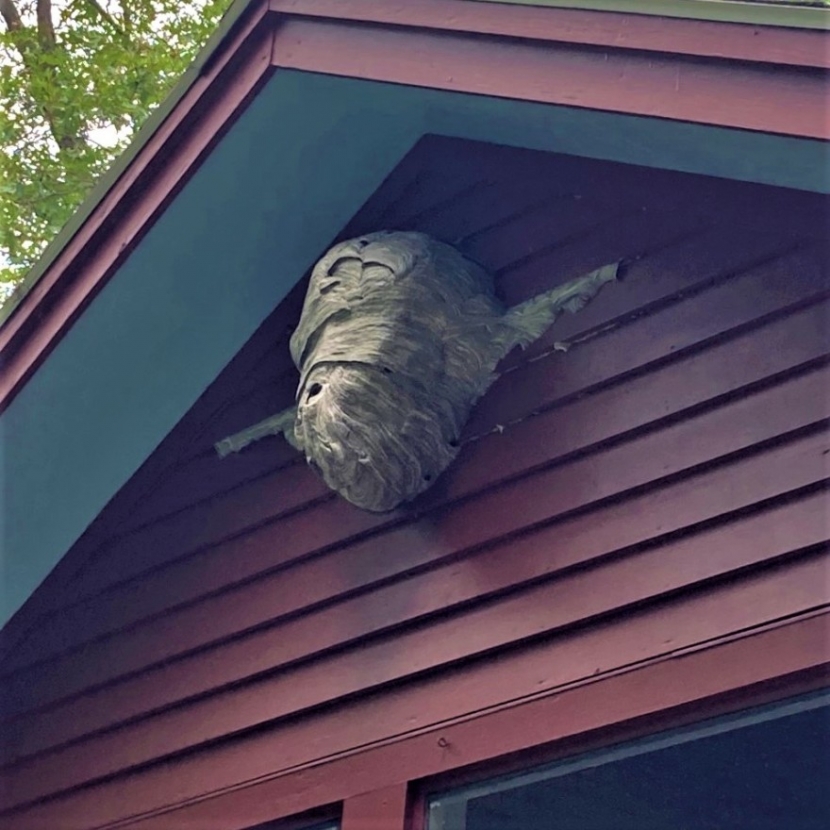 The owner of this house is holding out until winter before dealing with this bald-faced hornet nest. (Photo: Jane Difley)

"Something Wild" is joint production of NH Audubon, The Society for the Protection of New Hampshire Forests & NHPR. We recommend listening to it in its original format via NHPR but a transcript of the show is also below. (Originally aired September 10, 2021)

In the autumn, wasps and hornets are really aggressive, because that’s when their nests are full of babies — their larvae.

Quick lesson: all hornets are wasps, but not all wasps are hornets. It’s difficult to distinguish the differences — especially when you're trying not to get stung — but there are three common wasps that can be identified by looking at their nests, and how they overwinter.

Paper wasps build open-cell papery nests from chewed-up wood pulp or plants. They build flat, open nests under porch roofs, or along the eaves of buildings. 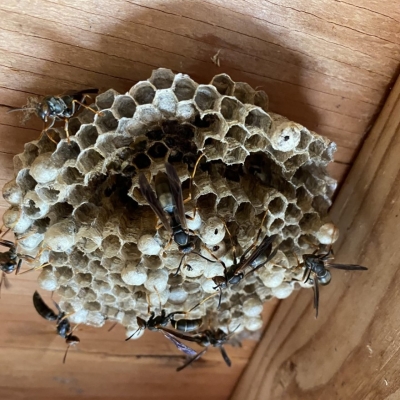 Paper wasps make open-celled, flattish nests. The photographer did in fact get stung in his efforts to get a photo with his phone! (Photo: Dave Anderson)
Paper wasps are pretty solitary. They build their own single nest or they join with a few others in building a small colony.

They don't overwinter in their nest and they don't reuse the previous year's nests; they build a new one each spring after emerging from underground.

And as far as wasp’s nests go, paper wasp nests are on the smaller side.

Those intimidating basketball-sized nests hanging from trees are likely made by bald-faced hornets. You’re right to be wary of them; they pack a painful sting and they can sting multiple times without losing their stinger.

Bald-faced hornets can even remember faces! They have been known to fly past some people in order to sting an invader to their nest.

Hornets tend to be highly social and they can have hundreds or even thousands of individuals working together.

The nests are rendered inert when the adults all die off in a hard freeze, usually by November. That is when nests can be safely removed. Don’t bring an inert nest inside a warm building or car if there is any chance there are still living adults in the nest.

Ground-nesting yellowjackets are likely the culprit if you’ve been stung while mowing the lawn, or even when just walking by a stone wall. According to UNH, there are at least nine different species of yellowjackets in the New England area, and they’re all aggressive. 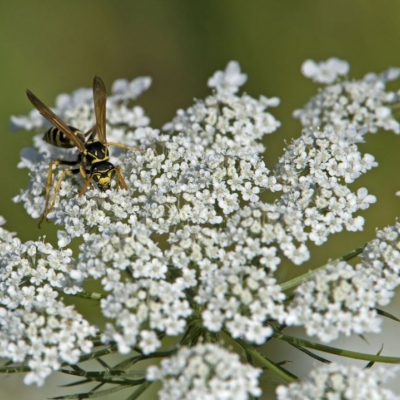 Yellowjacket ground hornet. James Boardman / Dreamstime
Yellowjackets are hornets that nest underground, although they also build paper nests the size of a soccer ball. They can be found in abandoned chipmunk burrows or in tree cavities and woodpiles.

Bears can smell the underground nest, and feed on yellowjackets extensively in early fall by digging the nests out of the ground. The young larvae are very nutritious right when bears are trying to build up their fat reserves in autumn.

Something Wild’s Dave Anderson recalls N.H. bear rehabilitator Ben Kilham describing one of his famous study bears digging out ground hornet nests at a rate of 10-20 nests per hour. That is one nest every 3 minutes!

The yellowjackets attack the marauding predator, of course, but the bears seem to tolerate the stinging as a trade-off for the food obtained.

You may have been deceived by the image of Winnie the Pooh eating honey from bees nests — which they will do if they can find a honey bee colony.

But more typically, bears and skunks in the forested landscape are foraging for ground hornet nests that do not contain honey or pollen, just those fat-rich larvae.

The yellowjacket workers die, and the queens overwinter alone underground. Nests succumb to a hard freeze and are not reused the next year.

How can we co-exist with wasps and hornets?

“The number one mistake people make is messing with active nests — people try to knock them down or spray them with insecticide. This is toxic to the environment and ignores their ecological role,” says Anderson.

Wasp and hornet stings can cause life-threatening symptoms, such as anaphylactic shock due to allergies. Usually, though, stings usually result in pain, swelling, and redness around the sting site and sometimes more extensive swelling, according to WebMD.

If a wasp nest is near your door or in a place that is making it impossible to co-exist, contact an exterminator. Anderson recommends, if at all possible, to tolerate the nest until winter, when you can safely knock it down and marvel at the intricate architecture created by the wasp.

Something Wild is a joint production of N.H. Audubon, the Society for the Protection of N.H. Forests, and NHPR.

Something Wild: Ouch! What Just Stung Me?