Something Wild: In Maine, will fewer moose mean healthier moose? 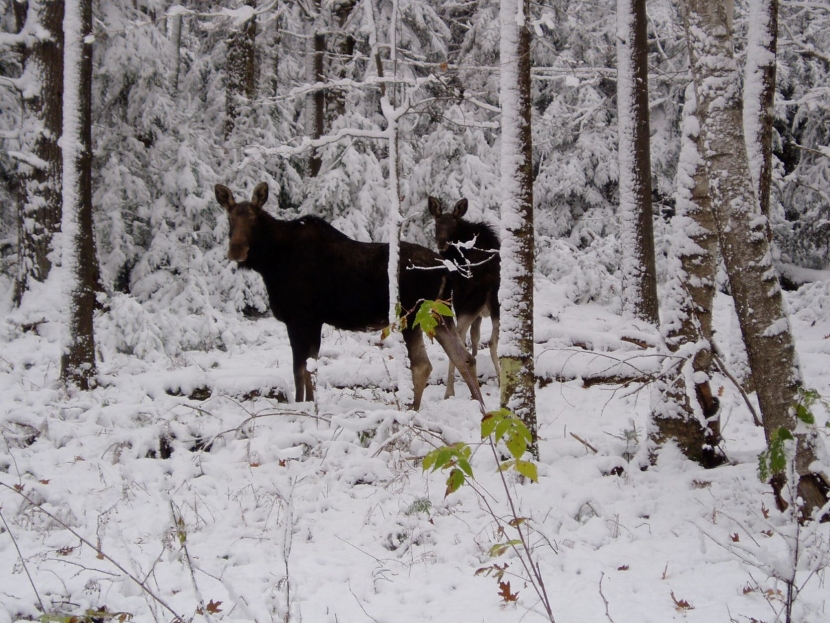 “Every single time I see a moose, it's fascinating. I've seen thousands of moose. I do aerial surveys. And I've handled moose. I've been up close and personal with moose. And it doesn't bore me for a second. They're a magnificent critter.”

Lee Kantar has been Maine’s state moose biologist for more than a decade. Something Wild spoke with him to learn about the New England moose population, and one approach the state of Maine is using to try to combat moose mortality caused by winter ticks.

He spoke with Something Wild’s Chris Martin and Dave Anderson. This conversation has been edited for clarity.

Dave Anderson: I feel like we've seen far fewer moose in our area in the last 15 years. According to the Internet, Vermont has 3000 moose. New Hampshire has an estimated 3300 moose. And Maine has 60,000. What's unique about the northern forests of Maine versus New Hampshire and Vermont that accounts for the difference in population?

Lee Kantar: Well, it's scale. I grew up in New Hampshire, so I'm not throwing you under the bus. But it's one range of moose. There's no New Hampshire moose. And there's no Maine moose. We’re all the same.

Dave Anderson: Fact is, you can’t talk about moose without talking about winter ticks. These tiny creatures quest for a moose host in the Fall, and then spend their entire life cycle, from larvae to nymph to adult, on that same moose until the next May, taking blood from that moose at every stage of the game and then reproducing exponentially.

Chris Martin: The state of Maine is studying a new approach to helping moose stay healthy in the face of winter tick devastation. Because Maine is so big, they are able to partition their moose hunt into separate times and areas, an approach called “adaptive management.”

Lee Kantar: We took one [wildlife management] unit that's about 2000 square miles. We divided that in two. So we essentially had a control side of the unit where we have the status quo for permits and then we have an experimental side where we increase the permits, basically cow and calf permits to try to lower the population.

Dave Anderson: So if the tick densities are highest in the areas with the highest moose populations, there is the thought that reducing the overall number of adult moose per square mile would result in a decrease in the number of winter ticks and an overall healthier herd.

Lee Kantar: Beautifully stated. Ticks are the tiny predator, because what they are doing is effectively eating our moose. And so the idea of having an adaptive unit where we're reducing moose density by shooting cows and calves is absolutely counterintuitive to everybody. And it's a very tough sell, but it's a scientific approach. It's absolutely critical to get this data and information to inform us.

This is a challenge with all wildlife species, because there is the health of the individual and then there's the health of the population. And so one moose can be in terrible, terrible health – sorry about that – I just got a text that I have mortality that was detected on one of my moose collars.

Dave Anderson: Is there any bright news for the future of moose in northern New England?

Lee Kantar: You know, the challenges with climate and climate change and how it's going to affect things is another challenge of scale and scope. We're talking about our earth and we're also talking about northern New England. We don't know what that's going to mean for the constriction of the moose range in New England and into southern Canada over time. If we get more rain events and more extreme rain events, are some of those events going to be snow? And what does that mean for the proliferation of winter ticks and its impact on moose? So we're getting into some complexities that make me not want to speculate on what the decades ahead of us are going to look like.

Dave Anderson: There is a bright point, and that is that people love moose. So we've got that going for us.

Lee Kantar: Right. And the more people who get out, and understand it, and see them, maybe they will want to help conserve our natural resources, including moose and these landscapes. I chose to work with one of the most magnificent creatures on this planet. So I'm a very lucky guy, despite the challenges we're facing.

Something Wild is a partnership of New Hampshire Audubon, the Forest Society and NHPR, and is produced by the team at Outside/In.