Something Wild: Keep An Eye Out for Rough-Legged Hawks 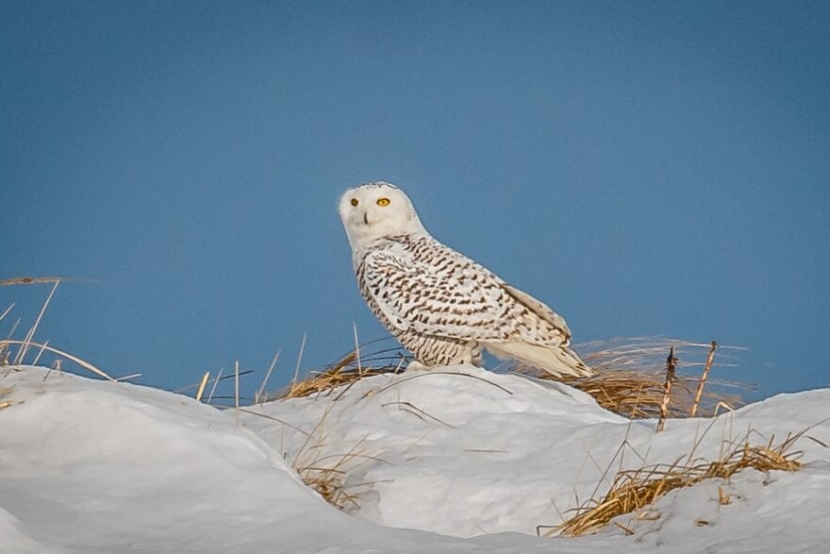 "Something Wild" is joint production of NH Audubon, The Society for the Protection of New Hampshire Forests & NHPR. We recommend listening to it in its original format via NHPR but a transcript of the show is also below. (Originally aired Nov. 19, 2021)

The rough-legged hawk is an Arctic visitor that spends the winter in New Hampshire. It has a unique ability to hover in mid-air while hunting, and can track its prey using UV vision.

When we think of snowbirds, we usually mean folks who leave New Hampshire in the winter for warmer places like Florida or Arizona.

But the rough-legged hawk is a raptor that heads south to New Hampshire to spend winter in what it considers to be a mild southern climate. It's an arctic breeder from Alaska and across northern Canada that only shows up south of the Canadian border from November through February.

The rough-legged hawk is not as well known as that other, more glamorous visitor from the arctic: the snowy owl. When snowy owls arrive it often makes the newspapers and social media, and birders rush out to view them wherever they've been spotted. Rough-legged hawks rarely get that kind of front-page attention, but in many ways they're just as impressive.

They are called “rough-legged” because their legs are feathered all the way down to their toes. It helps keep them warm.

“Rough-legs are fairly big hawks, but they appear rather delicate,” says Chris Martin, senior raptor biologist with N.H. Audubon. ”Probably because they have smallish beaks and feet - adaptations that make them less vulnerable to the cold.”

The rough-legged hawk has a distinctive way of hunting that only a few other raptors employ. They can hover while facing into the wind, suspended in midair. It's also called kiting. They can do it for hours, but a quick pull-in of their wings and they drop from the sky to pounce on their small rodent prey.

Their keen eyesight allows them to see ultraviolet light reflecting off the urine markings of the travel trails of mice and voles. It's like a map allowing them to locate their prey and identify good hunting spots.

While they’re in N.H., they hang out in open areas like farm fields, roadsides and coastal marshes.

“I've seen them out in windy fields perched on the tip tops of shrubs and saplings instead of in tall trees, balancing on the thinnest of branches that hardly seem able to hold them,” says Martin. They’ve developed this ability because of the lack of trees in the Arctic.

A rough-legged hawk can be hard to identify as they have two different color “morphs”: a light phase and a dark phase. This is different from their plumage, which refers more to the color and pattern of a bird's feathers. The light morph of the rough-legged hawk is mostly white, with speckled tan and brown and a black belly and a black patch on the crook of each wing. Their white tail has a broad, dark band at the tip.

The dark morph rough-legged hawk is all dark brown to nearly black.

Why aren’t they white like other arctic animals, such as polar bears or snowy owls? Scientists believe color morphs create and maintain genetic diversity and adaptability in a species, which has long-term evolutionary significance.

One study found different morphs were better adapted to different light conditions. The dark birds, for example, did better when they were camouflaged against a darker, cloudy sky, but the light birds did better when it was brighter.

During the summer in the Arctic, they nest on exposed rock cliffs, or even right on the ground. Their nests are a bulky mass of willow twigs, sometimes interlaced with small caribou bones, used as substitutes for sticks, since the tundra of the Arctic consists mostly of grasses, mosses and lichens.

Rough-legged hawks are strictly arctic breeders and only over-winter here in New Hampshire. Like snowy owls and other arctic mammals, their populations are tied to the ups and downs of their arctic prey. In a good year for lemmings, rough-legged hawks can produce seven young, but when prey is scarce, that number drops dramatically.

Rough-legged hawks fly 2000 miles from Nunavik to New Hampshire to winter here- keep an eye out for them!

All the photos in the original article were generously shared by N.H. birders. What have you seen lately? Ask a question or send a quick photo to SomethingWild@nhpr.org.

Learn more about rough-legged hawks at All About Birds.