Something Wild: How You Can Help Bluebirds 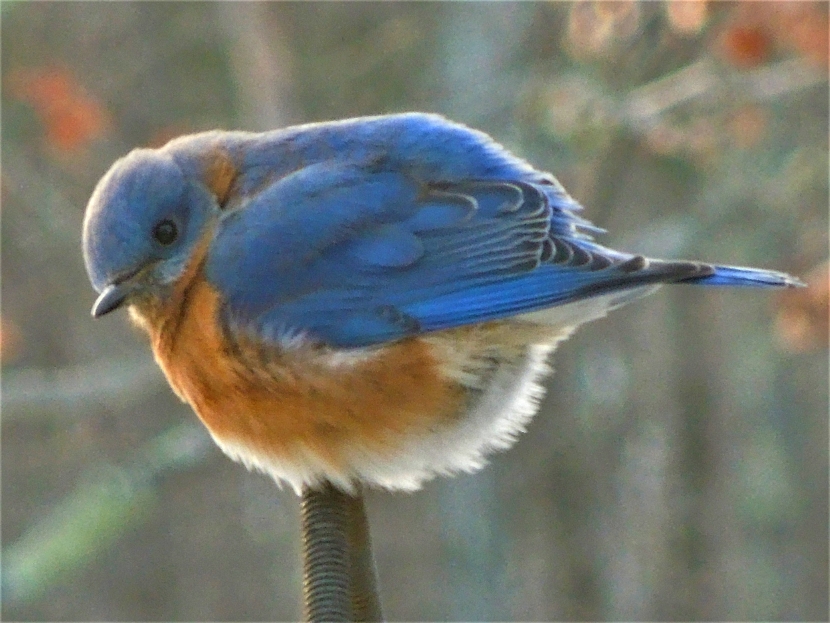 A bluebird in winter in Exeter, N.H. (Photo: Glenn Coppelmann)

"Something Wild" is joint production of NH Audubon, The Society for the Protection of New Hampshire Forests & NHPR. We recommend listening to it in its original format via NHPR but a transcript of the show is also below. (Originally aired May 6, 2022)

Every so often we get a listener question at Something Wild. Glenn Coppelman from Kingston, New Hampshire, wanted to know about the bluebirds in his backyard.

“During the warmer months, pairs of bluebirds nest and raise their young here at my property. So my question is, are the winter bluebirds related to each other or to the ones that were here in the in the spring and the summer? Or are they an unrelated gathering of friends just hanging around for the season?”

“One of the coolest things I've learned about bluebirds,” says Chris Martin of New Hampshire Audubon, “is that a winter flock is often a family group. Adults and several broods of young from the summer cooperating to survive the colder winter months together.”

Bluebirds are endearing and charismatic. In spring's warming sunshine, their whispering vocalizations evoke that old cliche about the bluebird of happiness.

The male eastern bluebird has a vivid sky-blue head, back, and tail, with rusty orange-brown on its throat and breast. The female is more grayish with subtle blue wings and tail. 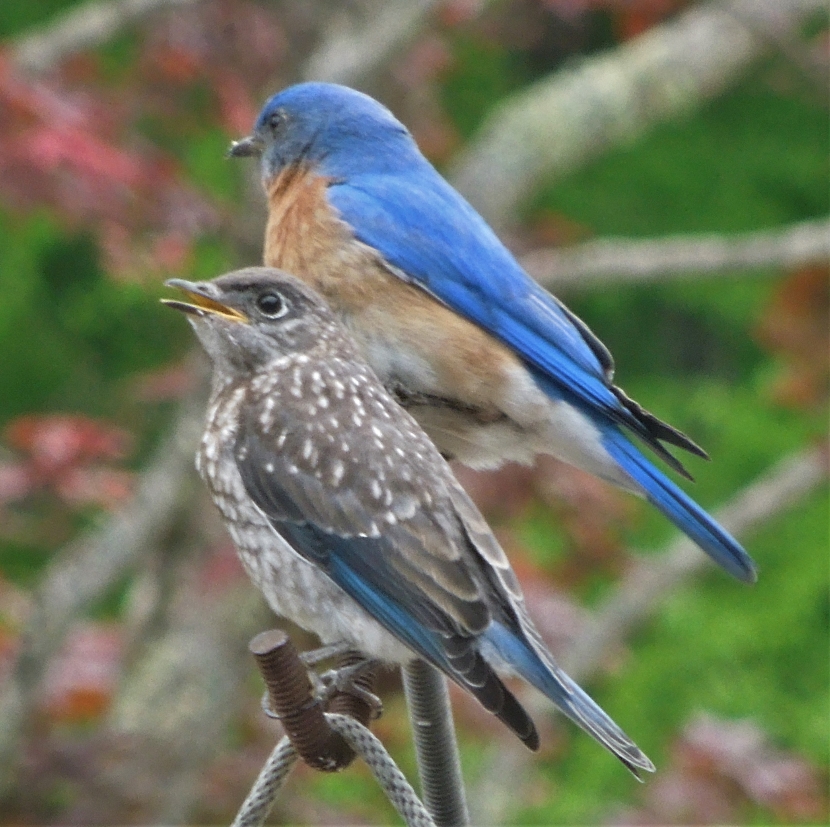 Bluebirds are a familiar harbinger of spring, and they're also a conservation success story.

Once it was feared that the eastern bluebird was on its way to extinction. By the 1970's there were maybe 8000 left in the U.S., but now the population is closer to two million. Both their decline and their rebound has had a lot to do with people's actions.

Their decline can be attributed in large part to the loss of open fields and natural tree cavities, as well as clearing brush along fences and replacing wooden fence posts with metal ones.

Another factor was very aggressive competition from starlings and house sparrows, two species that were introduced to North America long ago. Bluebirds were also exposed to toxins like DDT as they fed on insects.

Once these problems were recognized, people got organized.

"What drove their numbers down was the loss of nesting habitat, and by building the boxes and maintaining them to be for the intended species, that's where the success is coming from,” says Logan Young.

He and another volunteer, Bob Krewson, coordinate a bluebird monitoring program at New Hampshire Audubon's Massabesic Center in Auburn.

Roughly 100 nest boxes are scattered around the Massabesic Center fields, in what is truly a community science project. Local volunteers monitor nest boxes and collect data on the number of eggs laid and the number of chicks hatched. And they maintain boxes to reduce pests and predators.

Bluebirds often nest up to three times a season, and each clutch may number up to four or five eggs.

“Towards the end of the summer,” says Logan Young, “you can see the juveniles that are obviously a little older feeding the ones that are brand new and look a little disheveled, because they've just left the nest...bringing bugs over for them or bringing them to the parents to keep everything moving along.”

Are the winter bluebirds the same families we see breeding in the summer? Probably, but we can't say for sure. Likely there's a mix of both locals and new arrivals, which of course is how natural selection works.

But one thing is for certain: more boxes equals more bluebirds.

“The up-close experience of opening a box, seeing the birds or the eggs inside, is immediately rewarding,” says Logan. “You know that what you're doing is making a difference somehow.”

Something Wild is a partnership of New Hampshire Audubon, the Forest Society and NHPR, and is produced by the team at Outside /In.