Is this Salamander a Plant or Animal? Yes. 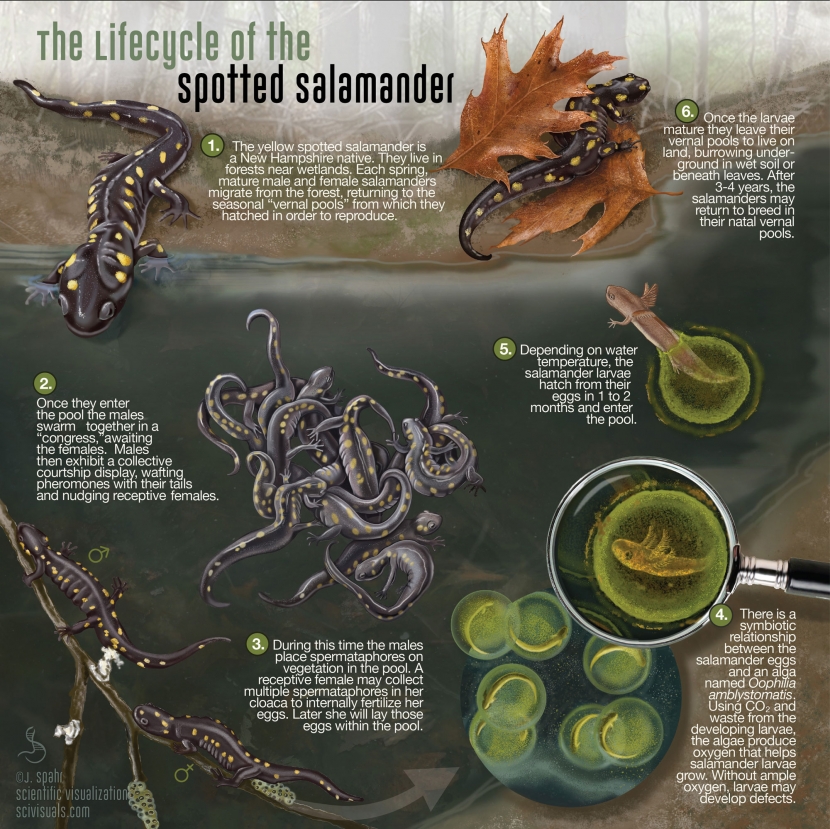 The lifecycle of the spotted salamander. Courtesy Juliana Spahr, scivisuals.com.

So much of New Hampshire’s natural beauty is obvious; from the top of a mountain trail, from the shore of a lake or pond, even from your kitchen window. You barely have to open your eyes to see it. But take a closer look, and beauty gives way to scientific wonder. That wonder may be inspired by the boiling of watery maple sap to sweet liquid sunshine; or by the majesty of an osprey wresting a writhing fish from a river. But keep an ear out this spring and you may witness wonder on molecular level!

Listen for something you only hear this time of year, the first shrill of the spring peepers. That’s your cue. It might be raining a little – or a lot…it’s definitely above freezing – around 43-degrees. It’s time to grab a flashlight and head for the nearest vernal pool. Vernal pools, of course, are depressions that collect snowmelt and the run-off of early spring rain. Despite the cool waters, they are hot beds of tiny, easily overlooked activity this time of year. 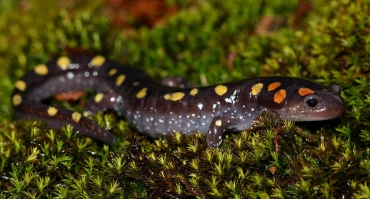 Spotted salamander. Photo courtesty NHPR.
One salamander in particular deserves close scrutiny; the spotted salamander (Ambystoma maculatum), named for the bright yellow spots all along its black back and tail. You won’t often catch a glimpse of them because they’re fossorial, spending most of their time underground. But on nights when you hear the first strains of a wood frog chorus, you can catch a glimpse of this reclusive creature when males congregate in vernal pools to mate with arriving females.

The mating process is brief, and salamanders return to their subterranean burrows, but they leave behind thick-walled clear gelatinous egg masses. A female may lay as many as 150 eggs within a single egg mass. And the eggs are enclosed within a thick, clear membrane, anchored to twigs or branches below the surface of the vernal pool. The embryos are visible as a black dot in the center of each egg.

Within a few days, these clear egg masses will start to turn an emerald green, a color indicates the presence of algae. Over decades of study, scientists discovered that the algae was not only inside the egg mass, but residing in each individual egg. The spotted salamander and this particular algae have developed a remarkable symbiotic relationship. In fact, the algae’s scientific name translates to “lover of salamander eggs.”

They get along so well for a couple of reasons. Developing embryos need oxygen, and algae needs carbon dioxide. Fortunately, the salamanders are exhaling carbon dioxide and the algae are photosynthesizing through the clear walls of the egg mass and venting oxygen. So this simple exchange of gases benefits both species. Additionally, the algae consumes nitrogen excreted by the salamanders, which could become toxic. The waste is like fertilizer for growth of the tiny one-celled alga.

So this is all pretty cool. But about a decade ago, it got even cooler. Scientists discovered that female salamanders carry the algae in their oviducts. It was theorized that the mother may be passing the algae to her eggs as she lays them, though it now seems more likely that the algae enter the eggs from the surrounding water. Either way, it’s the first case of plant cells living inside developing vertebrate animal tissues.

And that’s the wonder of spotted salamanders heading to vernal pools in the coming few weeks.

When you hear the spring peeper chorus, head outside to see the salamanders when they are breeding. Go back a few days later to see their egg masses. Return again in a few weeks to see the egg masses after they’ve turned green.

Big thanks to Juliana Spahr, who created the wonderful illustration at the top of the post, and allowed us to use it. Follow Juliana on Instagram @science_visuals.

Watch a video of this Something Wild feature here on Facebook.

Listen to this Something Wild feature here on NHPR