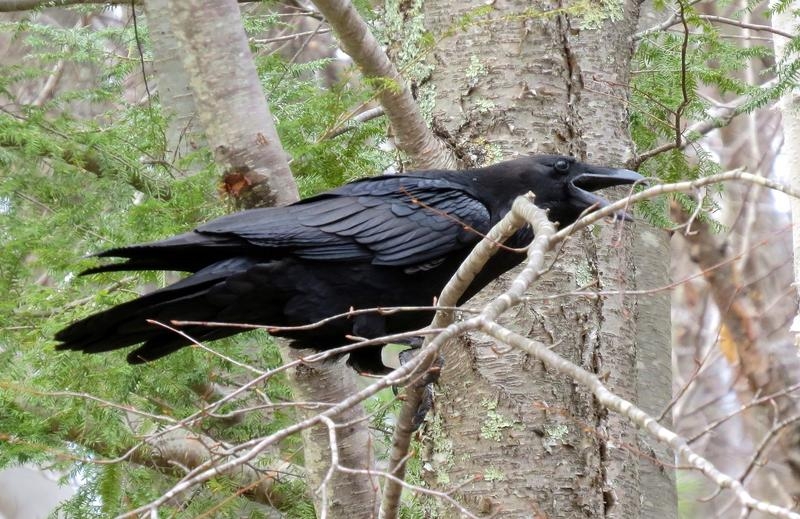 In this part of the country, the Corvid family includes blue jays, gray jays, crows and ravens. And ravens – Corvus corax – are the smartest of this intelligent family. Their brain-to-body ratio is on par with whales and the great apes.

Ravens are pretty common in New Hampshire, probably more common than you think since at first glance they look a lot like crows. But there are some key differences between these two big black birds. First, ravens are bigger, their wingspan is almost four feet across, as big as some of the hawks we have in New Hampshire. And while crow tail feathers are squared off, ravens are diamond-shaped. The beak is another distinctive trait, with the raven’s much larger respective to the size of its head than is the crow’s.

Aurally, their calls are also pretty different. Crows have a “caw,” while ravens emit a more guttural “croak.” Of course, all corvids are mimics, and ravens have been known to master a multitude of different sounds. One YouTube clip here captured a raven making all sorts of noises, from a dog bark to a car alarm.

Their territory also means you’ve probably seen more than you realize. Some 30-35 years ago ravens were found almost exclusively in northern parts of the state among the mountains. Ravens preferred sheer cliff faces for their nests, a great place to stay out of the way of predators. But they’ve proved adept at adapting to life among humans, and their range has consequently spread all over the state and moved into southern New England. Nests have been spotted on a water tower on the old Pease Air Force base and at the Costco in Nashua.

And these nests are a sight to see. Not only are they big – ravens add to them every year so they can become four-foot piles of sticks – they’re also quite comfy. Ravens line the nests with fur removed from the carcasses they feed on, which also helps to incubate their eggs. 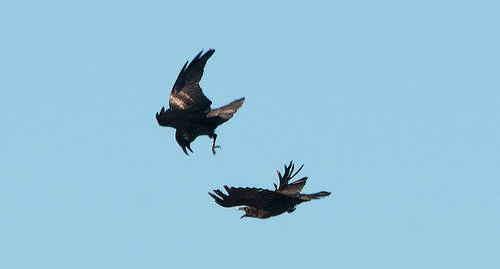 Another signature ravens trait is their aerial athleticism. They've been seen performing flips in mid-air. Pairs glide through the air on coordinated flights.

New Hampshire artist, blogger (and former NHPR Something Wild co-host) Rosemary Conroy observed, “I once watched a pair play in the wind coming up off the top of Mount Monadnock. It was an Olympian-level display of agility — swoops, rolls, dives — they even locked talons for a brief second and spun themselves around mid-air. It looked like joy — the ravens were no doubt having so much fun.”

This joy is a stark contrast to the gothic, even macabre association we have of this bird. Do we simply blame Edgar Allen Poe for the fact that we call a gathering of ravens an “unkindness” or a “conspiracy?” It’s more likely that our gloomy view of the bird is a result of its intelligence and scavenging tendencies. They’re able to detect patterns, so they learned that when humans started building a gallows or a gibbet, carrion would soon follow, so they tended to stay close. A study in Wyoming discovered that during hunting season, the sound of a gunshot draws ravens in to investigate a presumed carcass. From there its easy to see how they might have been viewed as harbingers of death, however unfairly.

Their intelligence also makes them capable predators. Sometimes they’ll work in pairs to raid seabird colonies, with one bird distracting an incubating adult and the other waiting to grab an egg or chick as soon as it’s uncovered. But they’re opportunists, too and will feast on a moose carcass in the middle of the forest. They’ll even invite their friends over, sending up a call to let ravens in the area know there’s food to be had. And sometimes they’ll call in help in the form of wolves. As mentioned above, ravens have a pretty big beak, but some animal hides are too tough even for them to break open. Ravens have been observed to mimic a wolf howl to attract a wolf or two to the carcass to gain access to the protein locked within.

These birds are a remarkable combination of intelligence and opportunism. No wonder they’re all over the state.