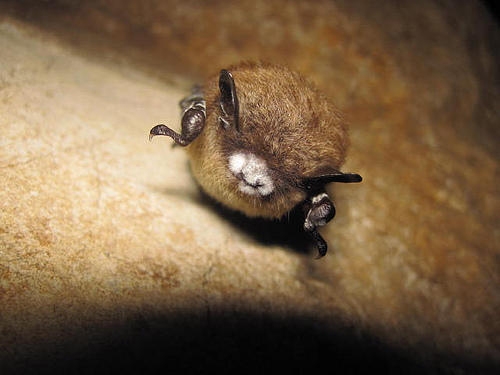 Bats in New Hampshire have been struggling with White Nose Syndrome for over a decade. (Photo: USFWS Headquarters/ FLIKR Creative Commons)

By the time the cold weather months hit us, three of New Hampshire’s eight species of bats have already migrated to warmer places in the South and Mid-Atlantic regions.

The bat that DO overwinter in New Hampshire have relocated out of their preferred summer roosts in trees (and Dave's chimney), and into winter hibernacula like caves, mine shafts, and abandoned military  bunkers where the microclimate is just right.

These cozy shelters provide stable temperatures, higher humidity, and protection from predators. But they also provide the perfect climate for Psedogymnoascus destructans, the fungus that causes White-nose Syndrome in bats.

According to Sandi Houghton, a wildlife biologist for New Hampshire Fish and Game / Non-game and Endangered Wildlife Division, as many as 99% of New Hampshire’s little brown bats were wiped out because of this fungus — found in the very places bats take winter refuge.

In fact most of what’s left of the little brown bat population in New Hampshire may be individuals that migrate out of the state in the fall.

The good news? Bats that migrate to other states in the winter do come back to New Hampshire during the warmer months.

Which is why it’s more important than ever to ensure bats’ summer roosting sites here in the Granite State stay intact. Forest managers now work to reduce negative impacts to these already stressed species by figuring out WHERE these bats are within New Hampshire forests — especially so that female bats can safely give birth and raise pups in maternal colonies.

Samuel Taylor is a forester with the New Hampshire Division of Forest and Lands. Part of his seasonal summer projects include setting up acoustic sampling equipment to listen for bats in the woods.

Acoustic sampling equipment is used to record bat activity in Carroll County. It consists of a microphone secured to the end of an extendable painter's pole, that is either taped or tied to a tree.

The audio samples collected are then analyzed using software that can tell whether there are bats roosting in the surrounding trees, and can tell bat biologists and foresters what kind of bats are in the area.

If species of particular concern are detected (most epsecially the northern longeared bat and the eastern small-footed bat), then forest managers can delay summer tree harvest until the pups have matured and dispersed.

If you'd like to learn more about how you can help monitor NH's bat populations:

Learn how to build a Bat Box from Andy Crowley's Woodshop Wednesday workshop.

Something Wild is a joint production of NH Audubon, The Society for the Protection of NH Forests and NHPR.