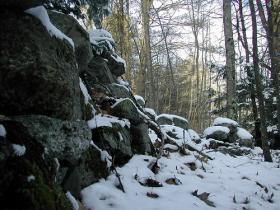 The ubiquitous stone walls of New Hampshire often seem to melt into the landscape, becoming transparent as we drive/bike/run/hike/ski through the terrain they once sought to divide. Some estimates suggest that by 1871 there were more 250,000 miles of stonewalls throughout in New England and New York—enough to circle the earth ten times. Most of which were built between 1810 and 1840.

Naturalist, Tom Wessels refers to the decades when forests were cleared to form pastures enclosed by stonewalls as "Sheep Fever." He calculates the mass of stone in walls to be greater than the Great Pyramids of Egypt suggesting stonewalls should rightfully be considered "the eighth wonder of the world."

These linear walls in the winter woods represent an incidental but important wildlife habitat feature, providing hardened shelter and cold food storage. Myriad nooks and crannies of stonewalls are fully-provisioned pantries of acorns, beechnuts, maple, birch and ash seeds and conifer cones restocked in autumn by mice, chipmunks and squirrels.

Stonewalls also contain hidden "hibernacula" - dens for sleeping and separate birthing chambers connected by tunnels beneath and between the stones. Tracks by the walls reveal how frequently carnivorous short-tailed weasels or "ermine" (the rodent that turn white in winter) use stonewalls as dens and as hunting grounds, preying upon the small mammals within and along  the walls. Larger mammals - raccoons, skunks, porcupines - renovate interior spaces to create cozy winter dens in areas devoid of fallen, hollow logs and natural rock shelters.

And while stonewalls were constructed to contain sheep during an exceedingly short-lived era in New England landscape history, their legacy endures as ideal structural habitat, providing food storage and shelter to wildlife living in forests which have reclaimed former pastures.

Listen to Something Wild on NHPR here