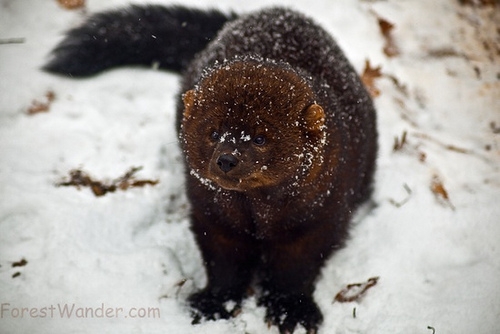 Fishers are members of the weasel family. Photo by Forest Wander

The "fisher cat": ferocious predator of house cats whose bloodcurdling screams pierce the dark of night. Facts about this one wildlife species have mutated a long way into fiction. For starters, fishers are members of the weasel family—not feline. Properly referred to, they're "fishers," not "fisher cats."

As for all the house cats they're thought to kill, here's what a NH Fish and Game species account says:

"Do they eat cats? Sure, as do foxes, coyotes, owls and – more likely – a local SUV. It is the nature of a house cat injured on a highway to seek a hiding place to die, but you can bet a 'fisher cat' will be blamed for its disappearance."

Fish and Game analysis of the stomach contents of 1,000 fishers did find cat hair. In one stomach. I know one wildlife tracker who followed fisher tracks to a kill site. What was the prey? Apples under a wild apple tree.

And those blood-curdling nocturnal screams? When recordings are compared to those of red fox, they are a perfect match.

Fishers are secretive, solitary and keep to the forest—silently. Silence helps them maintain stealth. Their only known vocalizations are low chuckling and an occasional hiss or growl. While coyotes howl to communicate to the pack, fishers communicate by leaving—and reading—scent.

As for why fishers get such a bum rap, trappers may have helped back when fishers were widely trapped for their valuable pelts. It's a lot easier to get a landowner permission to set traps to catch a ferocious predator of household pets.